Shares in Ryanair gained 0.4% yesterday, on the day the carrier announced it would close its Belfast City Airport base at the end of the summer schedule (31-Aug-2010) following the airport's confirmation that the public inquiry into the runway extension would be further delayed.

Ryanair, which launched a base in Belfast City in Oct-2007, operates five routes to the UK because of the short runway at Belfast City. Ryanair had planned to launch a wide range of European routes from/to Belfast City once the runway extension was delivered. Ryanair expects the closure to result in passenger loses of up to 1 million passengers p/a.

From early Nov-2010, Ryanair will switch its single Belfast City-based aircraft to another European airport, with the loss of 50 jobs, with all staff to be offered relocation elsewhere in the UK or Europe.

Ryanair CEO, Michael O’Leary, said: “It is very disappointing that the promised runway extension at Belfast City Airport has still not materialised more than three years after we opened the base at Belfast City. It makes no sense for Ryanair to continue to invest in Belfast City, operating restricted routes with less than full payloads between Belfast and other UK airports (which suffer a double APD penalty) unless there is clear and immediate prospect of Ryanair being enabled to safely operate longer European routes from Belfast City Airport and for this we need the runway extension."

The new framework agreement for Air Berlin’s cockpit personnel includes a progressive adjustment of the key working conditions of Air Berlin pilots to match LTU’s level by 2013. These adjustments relate to the number of duty-free days per year, flexibility in the allocation of duty-free days per month as well as holiday entitlements and continued salary payments in the event of illness.

Optimised models for drawing up duty rosters and assigning standby duties have also been agreed with Air Berlin and LTU. In addition the union and the employers have agreed rules for the introduction of an augmented cockpit crew on long-haul flights. By the time the summer 2011 schedule comes into effect, a third pilot will be added to the cockpit crew on selected, extended long-haul services.

The framework agreements are due to run until 31-Dec-2012, while the collective agreements for the enlarged crew will expire on 01-May-2014. The settlement is subject to the approval of VC members at Air Berlin and LTU. 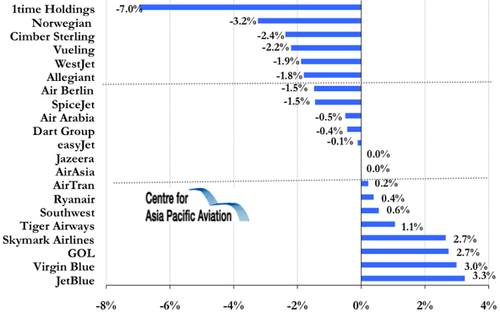