Ryanair profits edge up but miss expectations on fuel blowout

Ryanair’s strong performance in passenger, yields and top line revenue growth and was tempered by a spike in costs, most notably the cost of fuel, which increased 50% year-on-year. The LCC reported adjusted net income of EUR139 million, a slight 1% increase over 1Q2011. Ryanair’s result comes the day after rival easyJet announced a strong quarterly result and the LCC increasing its pre-tax profit guidance for FY2011 (which ends on 30-Sep-2011).

Ryanair CEO Michael O’Leary said that despite the severe headwinds on the cost side, the “robust result is testimony to the strength of Ryanair’s lowest fares/lowest cost model which continues to deliver profit and traffic growth despite the recession and high oil prices". He maintained his guidance of a fiscal year net profit of EUR400 million. He retained his guidance for yields growth of 12% for the full year and a 13% increase in operating expenses (2%, ex fuel and sector length adjusted).

Total revenue increased 29% to EUR1.15 billion in the quarter, outpacing the 18% rise in passenger numbers. Average fares rose 11% in the period to EUR43. 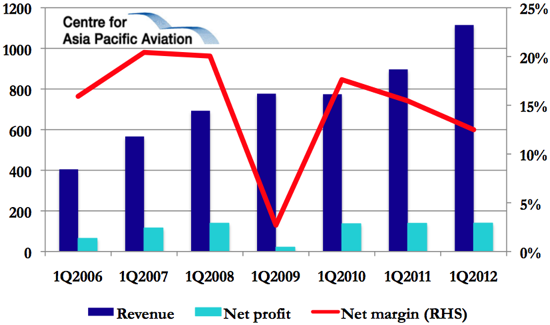 Mr O’Leary said that traffic growth was “flattered” in 1Q by the “unnecessary airspace closures in April/ May 2010” which led to the cancellation of 9400 flights, and the loss of almost 1.5 million passengers. The LCC reversed its recent trend of falling traffic figures in the fiscal first quarter, carrying 21.3 million passengers in the quarter, an 18% increase. 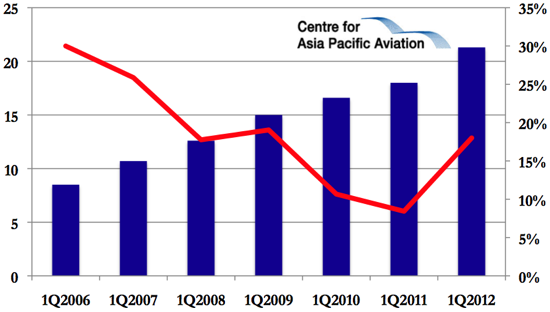 Ancillary revenue increased 22%, which outpaced passenger volume growth, to EUR248 million. Ancillary revenue accounted for 21% of total revenue. Per passenger ancillary growth, however, came in at a more muted 3%, down sharply on the previous quarter’s (4Q2011) growth of 12%. Ryanair attributed the improved ancillary performance to “an improved product mix and higher internet related revenues”.

The LCC’s major move in the ancillary area has been recent trials of reserved seating for 21 extra-legroom seats on selected routes for a fee of EUR10 per seat. Mr O’Leary said that if successful the new offering would be rolled out more aggressively across the network over the winter. He said that reserve seating would be included in Ryanair’s strategy “as long as it doesn't compromise or completely destroy priority boarding … There's a balance to be struck there between reserved seating for those who want to pay more for reserved seating … but not if it's just the priority borders switching directly across to reserved seating." Ryanair expects reserved seating to be more popular on longer sectors and family travel. “I don't think, for example, we'll roll out reserved seating across every route, domestic routes within Spain or within Italy,” he said. “We're not sure if it would have any appeal at all.”

Despite strong growth in the above metrics, the real story for Ryanair was the more significant spike in operating costs, which largely neutralised the LCC’s work on the revenue side. Operating costs increased 28%, led by a EUR140 million, or a 49%, rise in fuel costs. Unit costs increased 14%. Ryanair noted that excluding fuel, sector length adjusted unit costs fell by 1%, as the LCC “rigorously controlled costs, despite a 2% increase in basic pay, higher Eurocontrol charges, and substantially higher charges at Dublin Airport.” Elsewhere, Operating costs ex-fuel on an absolute basis rose by 14% to EUR559 million. 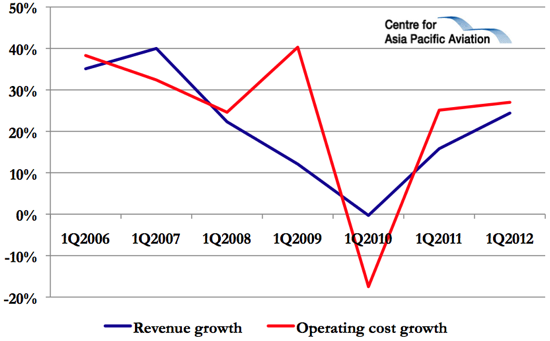 Cost rises at Ryanair, which puts upward pressure on airfares and thus threatens to dampen revenue and traffic growth is an ongoing threat. Operating cost growth has been trending ahead of revenue growth; a trend that could continue with rises in airport charges, navigation charges, staff costs and most significantly fuel costs. Significant unit cost increases were across all cost items, and with Ryanair generally slowing its rate of growth, it would not be unreasonable to expect unit costs to creep up. The LCC, which has been named the world’s “greenest” airline, expects the EU Emission Trading Scheme to cost it EUR15 million p/a from next year, when the aviation industry is included in the scheme.

Fuel prices a boon for Ryanair

Despite the pain high fuel prices have caused Ryanair in the quarter, Mr O’Leary said that sustained high oil prices are “forcing competitors to further increase their fuel surcharges and fares which make Ryanair’s low fares even more attractive”. Ryanair does not place a fuel surcharge on any fares. Ryanair says it benefits from recessions, when consumers are looking for cheaper deals. Deputy CEO Howard Millar said the LCC’s continuing ability to attract passengers reflected "the recession in people's minds" as much as anything else.

Ryanair will be taking step to address what it perceives as the chief culprits behind its quickly escalating costs. Airport charges are top of the list and Mr O’Leary will be making his case to the respective authorities at his two largest bases; London Stansted and Dublin.

Mr O’Leary confirmed Ryanair plans to launch legal action against BAA, the UK’s largest airport operator and the owner of London Stasted, with the LCC seeking to recover “substantial overcharges” it suffered due to BAA’s “monopolistic” control of airports in southern England. Ryanair’s decision follows confirmation from the UK Competition Commission that BAA must sell London Stansted and either Glasgow or Edinburgh airport. Mr O’Leary accussed BAA of employing “delaying tactics [which] have not stopped BAA at Stansted overcharging airlines, generating excess monopoly profits, while losing more routes and traffic.”

The CEO also warned that Ryanair expects Dublin Airport’s traffic to fall in calendar 2011, which would be its fourth consecutive annual fall. He said this would occur due to “the DAA’s unjustified 40% increase in airport charges, which has led to winter capacity cuts by Ryanair and many other carriers operating to Dublin”. Mr O’Leary noted that rival Aer Lingus has described the higher charges as “insane”.

Ryanair said fuel prices remain “stubbornly high”, trading at USD118 per barrel. The LCC is 90% hedged at USD860 per tonne (USD86 per barrel), which is 18% more than 1Q2010. The LCC has taken advantage of recent price falls to increase its hedge book to 20% of 1Q2013 at an average price of USD1035 per tonnes (USD103 per barrel). Despite being proportionately more affective by movements in fuel prices than other airlines, Ryanair reiterated that higher fuel costs makes its fares more attractive as competitors increase fuel surcharges, collapse or look to merge with other airlines. “This will generate growth opportunities for Ryanair because we operate the most fuel efficient aircraft, and have the lowest operating costs,” the LCC claims.

China and COMAC: 'We're going out there'

Ryanair stated it would consider being the international launch customer for the C919. Mr O’Leary said plans to break the Airbus-Boeing duopoly on the commercial aircraft market. Ryanair signed an MoU with COMAC, which is described as a “very credible alternative to Boeing and Airbus”, to participate in discussions on the development of the C919 aircraft for Ryanair, which would be designed to carry up to 200 passengers and should be available from 2018 onwards. Ryanair will share its experience and expertise to assist COMAC to develop the new aircraft. At the time, the carrier stated a 200-seat C919 would enable Ryanair to lower costs and continue to lower fares for its passengers across Europe.

The CEO said he has been “extraordinary impressed” with COMAC. “In a series of four meetings they've have responded very quickly and favourably to every request we've made of them,” Mr O’Leary said. “We're going out there”.

Discussing public opinion about Chinese equipment, Mr O’Leary acknowledged that “there has been some concerns about all Chinese aircraft but … this [the C919] is a glorified Airbus sub-assembled in China. Some 80% of the components are Western made. It's Western engines, Rockwell Collins' avionics all the rest of it. And the Chinese have assembled almost everything else that the West consumes at the moment, so I don't have any issue with the aircraft.”

Ryanair expressed its disappointment at Boeing’s decision to scrap plans for an all-new B737 and instead upgrade its 737 with new engines. “Our preference would have been for a redevelopment,” said deputy CEO Howard Millar. “The key driver will be pricing and how much fuel it would save. Its very early days, but clearly it’s something we have to look at."  Messrs O’Leary and Millar said they were interest in the American Airlines order last week, in which the US carrier placed an order for a re-engined B737. Mr O’Leary said “Boeing seems to be so desperate” to get the order that they will be funding the deliveries themselves. He added Boeing is running being the A320neo at the moment, but said that “they can always catch up, and the best way to catch up would be to drop the price of the aircraft. “ He confirmed he is “not a fan” of re-engining and would rather see a new aircraft.

Ryanair left its guidance unchanged for the remainder of the fiscal year. Total traffic in FY2012 will increase 4%, comprising 10% growth in the seasonally-stronger first half, and fall 4% in the second half due to previously announced capacity cuts.

Mr O’Leary said there might be some flexibility in this plan, depending on oil prices over the period and wider economic conditions. He said that the grounding of 80 aircraft over the winter period was an “opportunistic proposal” to the Irish government to start growing traffic rapidly at three Irish airports from October. If anything materialises, this could absorb up to ten aircraft. “We've done deals at a number of airports across Europe for very a cheap or in some cases, no parking fees those aircraft for the winter,” Mr O’Leary stated. “And I think well, we'll have to cut back on staffing a bit. It's absolutely the right thing to do this winter to cut back very meaningfully when oil is so expensive.”

In regards to fleet plans Mr O’Leary confirmed Ryanair is likely to maintain a static fleet through until FY2015, after which the LCC will start growing again. He said any growth, however, would be more muted than growth seen previously. He said Ryanair is “very happy not to have a big aircraft commitment at the moment” given oil prices and developments in aircraft technologies.

Average fares in FY2012 are expected to rise up to 12% due to various yield support initiatives, include a robus forward bookings, better mix of new routes and bases, our winter capacity cuts, higher competitor fares and fuel surcharges. Operating costs per passenger for the year are expected to rise 13% due to higher oil prices. Ryanair maintained its guidance of a full-year net profit after tax of EUR400 million, similar to its FY2011 result.

The proven Ryanair business model delivered a strong performance in a turbulent operating environment that brought some cost surprises, although it failed to excite the market like the easyJet result last week. The LCC’s competitive, strategic and financial position remains very strong.

The Ryanair model continues to demonstrate its capacity for cash generation, reporting an operating cash flow of EUR348.7 million, a 27% year-on-year increase, which is occurring as capex eases due to the slower aircraft delivery programme. Profit per passenger came in at EUR6.50, demonstrating the profitability in this business, which is expected to grow in the next quarter. Net debt halved in the quarter to EUR357.3 million and gross cash increased to EUR3.2 billion. Despite its relatively low debt levels and its mountain of cash, Ryanair does not plan to return anything to shareholders in the short-term. Mr O’Leary remains highly cautious of any shock and prefers to keep a large cash buffer to prepare for unexpected events. “This is a very cyclical, capital-intensive industry,” he said. “We have always managed this company in a very conservative way to maximise cash flow. Anybody who's investing in Ryanair for the dividends needs their heads examined,” he added. “We intend to deliver capital growth … I have no interest in dividends.”