WebJet confirmed Ryanair Holdings (shares up 0.8%) has offered to buy an undisclosed equity stake in the Brazilian airline. Talks with Ryanair are likely to proceed once Brazil enacts a new law, expected in Mar-2010, increasing foreign ownership levels in Brazilian airlines from the current 20% to 49%.

In the Americas, shares in JetBlue fell 3.3%, on a day of heavy volume trading (22.9 million shares changed hands, compared to the previous day's 10.4 million, while AirTran’s shares slumped 5.9% and Southwest fell 1.1%.

Flybe witnesses large reduction in profits in 12 months to Mar-2009; but “good profits” in six months to Sep-2009

In Europe, Flybe reported a large reduction in pre-tax profits in the 12 months ended 31-Mar-2009, with the Devon-based carrier’s pre-tax profits slumping 64% to GBP12.8 million. The reduction occurred despite a 6.8% year-on-year increase in revenue (to GBP572 million) and a 4.3% increase in passenger numbers. Flybe last year became the largest domestic carrier in the UK, as it gained market share in a number of key markets.

Flybe stated business travel virtually stopped in Jan-Mar-2009, contributing to "unprecedented losses" in the final quarter of its financial year, although the carrier reported “good profits” for the half year period to 30-Sep-2008.

Looking forward, Flybe Chairman and CEO, Jim French, stated he believes Flybe will be “one of a handful of European airlines to emerge stronger and more competitive as the recession comes to an end”, adding the carrier is having a “good recession and is well positioned to harvest the benefits when more benign economic conditions return." 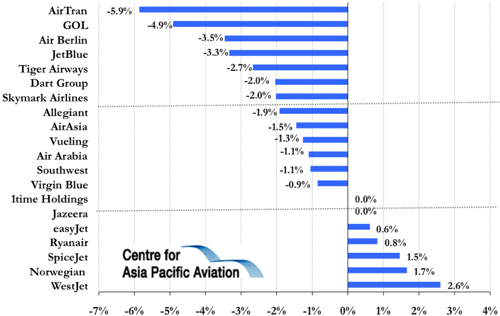