Ryanair (-5.2%) slumped on Monday (01-Nov-2010) despite stating it now anticipates winter yields to be slightly better than forecast. As a result, the LCC now expects the full-year yield increase to be at the upper end of the +5% to +10% range previously guided.

Furthermore, given these somewhat better winter yield forecasts, Ryanair now believes FY2010 net profit will exceed the upper end of its previous forecast range (EUR350-375 million) and will now finish (subject to 4Q2010 yields) within a range of EUR380-400 million.

Also during trading, Ryanair CFO Howard Millar confirmed the LCC has no plans to make a third offer for Aer Lingus (-2.0%) unless the government voluntarily offers to sell Ryanair its stake. Ryanair owns 29.8% of Aer Lingus and the Irish Government has a 25% stake. While the government has stated it plans to cut its budget deficit by selling state-owned assets, its intentions with Aer Lingus have not been made clear.

Elsewhere, British Airways (-4.5%) also declined after Liberum downgraded its rating of the carrier’s shares from "buy" to "hold". However, fair value price was raised from GBP 290 pence to GBP 332 pence.

At the other end of the spectrum, Air Berlin (+3.9%) shares gained after the LCC stated in its preliminary financial highlights for the three months ended 30-Sep-2010 the day before. The carrier stated net profit rose 42.8% year-on-year for the quarter, to EUR135.9 million. The result was on a 27.4% rise in revenue, to EUR1,241 million. 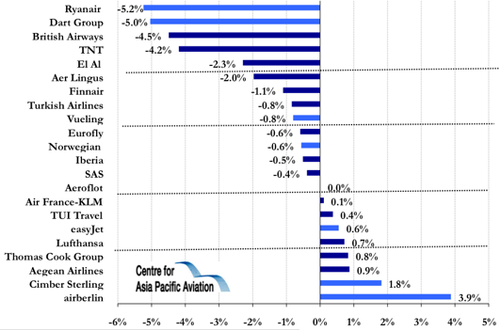