Shares in Ryanair slipped 2.4% yesterday, on the same day the carrier held its AGM.

Ryanair CEO Michael O'Leary stated the LCC is considering opening routes to all major European airports with the exception of the top three – London Heathrow, Paris Charles de Gaulle and Frankfurt am Main – as slowing growth prompts it to modify its strategy based on operating only to less-costly terminals.

Mr O'Leary commented that operating to larger airports, while raising costs, would enable the carrier to increase yields by attracting more business passengers. He added that larger city airports are now interested in talking to LCCs, adding that costlier airports are becoming more viable as the carrier reduces its use of facilities such as check-in desks and baggage-handling machines.

He commented: “Almost any airport that we don’t fly to is talking to us across Europe. Increasingly in the future there’s going to be a spread of bigger airports, as well as secondary ones ... Bigger airports are now realising that easyJet isn’t growing and none of the flag carriers are growing, so they’re now doing deals with us. And we have such a price advantage over anyone else that we can move in on anyone’s route and blow them out of it.”

Ryanair growth to slow to 5% or lower

Mr O'Leary added that the carrier would still maintain its 25-minute turnaround even at larger airports and added that fares would likely increase in the future, as the carrier’s growth rates slows to 5% or lower, stating: “When fares aren’t being reduced every year in 2013, 2014, 2015 there’ll be more of a focus on quality, service, customer satisfaction and all that, because the prices will be rising. But are we suddenly going to go from an average fare of EUR34 to EUR100? No!”

Mr O'Leary added that he is “comfortable” with the net profit outlook for FY2011, with the carrier forecasting a 10-15% rise in profits for the year to EUR350-375 million. The carrier also still expects passenger numbers to rise 11%, to 73.5 million for FY2011, including 1.5 million cancellations due to the ash cloud in Apr-2010.

Shares in Cimber Sterling were again stronger yesterday gaining 5.8%, following drastic up and down movements in the carrier’s share price this week and over the past couple of months in general. 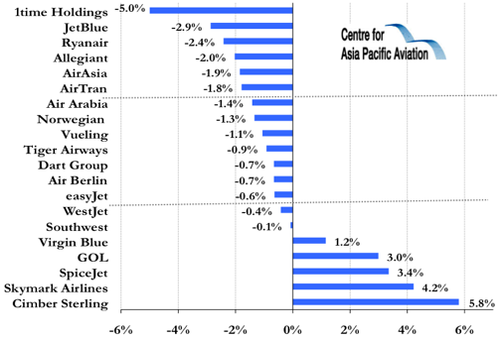