European airline shares were mixed on Friday (15-Oct-2010) echoing mixed results across wider markets for the day. Markets ended trading varied ahead of a speech by US Federal Reserve Chairman Ben Bernanke in which it was expected he would announce new stimulus for the economy, while Europe’s biggest retailer, Carrefour, reduced its 2010 profit forecast.

Aeroflot (+1.8%) was one of the day’s biggest gainers on news the Russian Government is considering divesting part of its majority stake in Aeroflot to lower the country's budget deficit. Finance Minister Alexei Kudrin stated that the Government would continue to hold a controlling interest and foreign investors have already shown interest. Russia’s current budget deficit is 6.8%, which is aims to cut to under 4% through the sale of government stakes in oil companies, telecommunications, banks, railways and airlines.

Turkish Airlines (+0.9%), Air France-KLM (-0.5%) and British Airways (+1.2%) are reportedly among the carriers interested in purchasing a stake in Polish national carrier and Star Alliance member LOT – Polish Airlines. The Polish Government has announced plans to sell a minority stake in the airline in 2011 and is even considering divesting its entire stake in the future.

In other British Airways news, the carrier stated that it has been “delighted” with demand for the airline’s new premium cabin. The airline spent GBP100 million on the development and introduction of its new first class cabin, which will eventually be available on all long-haul aircraft.

Elsewhere, Iberia (+2.2%) climbed after reporting improved traffic results for Sep-2010 the day prior. Eurofly (+1.8%) was also up. SAS (-2.3%) and Cimber Sterling (-1.1%) were among the decliners for the day after Nordic markets ended trading lower. 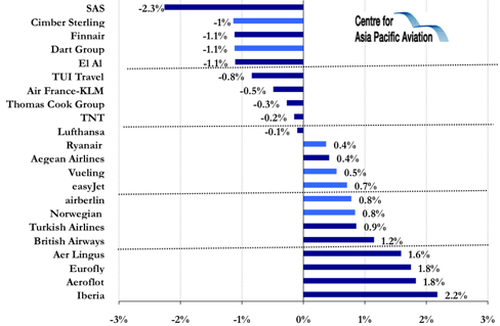