Royal Brunei Airlines (RBA) is preparing to expand capacity within Asia following the acquisition of an additional A320 while reducing the size of its widebody fleet to match its new and smaller long-haul network. The adjustments come as RBA implemented, at the beginning of last week, its restructuring plan, focussing on local traffic and long-haul to short-haul connections rather than continuing in the intensely competitive 'Kangaroo route'. RBA sees five A320s and five B787s, which are expected to replace its six B777-200ERs by the end of 2014, as an ideal fleet for executing its new strategy over the medium to long term. 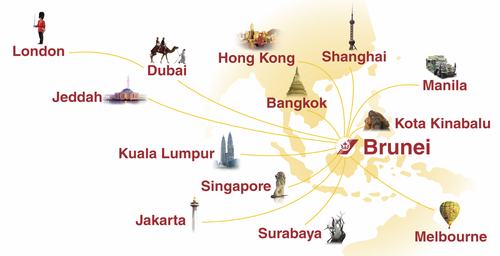 The changes were initiated after RBA incurred big financial losses over the last several years. The long-haul network was particularly unprofitable and the Brunei Government saw little need to continue funding the network given that over 90% of its long-haul passengers were transit passengers.

RBA’s long-haul network has been served over the last year with six B777-200ERs, which are being leased from Singapore Airlines (SIA) as an interim B767 replacement until RBA’s B787s are delivered. The two-year leases on the B777-200ER do not start expiring until mid-2012 but RBA’s just completed network restructuring now leaves the carrier with more widebodies than it currently requires.

RBA has not been publicly commenting about potential early returns of some of its B777s as negotiations with SIA continue. RBA also has not yet publicly announced delivery dates for the five B787s on order. But industry sources say RBA is seeking a compromise with SIA in which it would extend the leases on some of the B777-200ERs while returning some aircraft early. The extended leases are needed to line up with the B787-8 delivery dates Boeing has recently provided RBA, which according to sources start in Aug-2013 and go through 2014.

RBA is in line to be the first B787 operator in Southeast Asia and is now working on selecting interior products for the aircraft, including lie-flat business class, which will represent a significant improvement on the ageing product inherited with the SIA B777-200ERs. RBA deputy chairman Dermot Mannion told CAPA on the sidelines of last week’s Association of Asia Pacific Airlines (AAPA) assembly in Seoul that he is “comfortable” with a fleet of five B787s, although the carrier’s two remaining long-haul routes – Bandar Seri Begawan-Dubai-London (daily) and Bandar Seri Begawan-Melbourne (four weekly flights) – do not require so many widebodies. He explains the carrier also plans to use its B787s on some Asian frequencies such as Shanghai to meet growing demand on its Asian routes.

Mr Mannion said RBA also has committed to leasing a fifth A320 family aircraft to increase capacity on the carrier’s Asian routes. “We our content to refocus attention on Asia and downsize long-haul,” Mr Mannion says.

RBA currently operates two A319s and two A320s. Mr Mannion says the additional A320, which is coming out of the fleet of Singapore-based Tiger Airways and is being leased from CIT, will be delivered in Mar-2012.

While RBA increases its focus on Asian routes, Mr Mannion explains that only “strategic long-haul” routes have been retained. The Bandar Seri Begawan-Dubai-London Heathrow route is considered strategic as government-owned RBA believes it is important to retain a presence in the London market. Mr Mannion says the stop in Dubai will be kept, even after RBA takes its B787-8s, as the pick-up rights in Dubai makes the route viable.

While Melbourne was only launched in Mar-2011, Mr Mannion says “Melbourne is strategically important for us in future”. He points out that Melbourne is the fastest growing market in Australia and RBA sees opportunities to offer connections between Melbourne and its Asian destinations.

In addition to Brisbane and Perth, RBA at one point also served Sydney and Darwin. But RBA no longer has a need to maintain multiple links to Australia as it has exited the kangaroo route.

RBA was a niche player in the kangaroo route for several years but it was never a profitable proposition as RBA had to offer very low fares to entice passengers to transit in both Dubai and Bandar Seri Begawan. Competition in the UK-Australia market also increased significantly in recent years due to the rapid expansion of the Gulf carriers, resulting in even bigger losses across RBA’s long-haul network. “A better business model is to feed short-haul,” Mr Mannion says, adding that pursuing long-haul to long-haul intercontinental connecting traffic is not a viable proposition these days for smaller carriers.

Mr Mannion says RBA’s remaining Asia routes have a much different dynamic as about 75% of traffic on these flights are local passengers heading to and from Brunei, a stark contrast to the less than 10% of local passengers that flew the carrier’s pre-restructuring long-haul network. The new strategy the former Aer Lingus CEO has put in place at RBA involves focussing primarily on local demand while using the roughly 25% of remaining seats on Asian flights to pursue intra-Asia connections as well as Asia-Melbourne connections.

Given the tiny size of its local market, it is unlikely Brunei will be able to support a private carrier anytime in the foreseeable future. But the Government is finally pursuing a logical strategy that should allow its perennially loss-making carrier to at least approach breakeven. It made little sense for the Brunei Government to continue to pour capital into a strategy which resulted in heavily subsidising passengers which were not heading to and from Brunei.

The new strategy that has been implemented by Mr Mannion should by and large meet the nationalistic needs, with Brunei residents being able to continue flying RBA for frequent trips within the region as well as to the Middle East, Melbourne and London. Other destinations, which by large have below 20 passengers per day on an O&D basis, can be sufficiently served through codeshares and interline partnerships.

While small, RBA will continue to play an important role in its local market, where it still has 75% market share despite the recent network cuts (see Background information below). The introduction of state-of-the-art B787s in 3Q2013 will also help put the carrier on the map and draw more tourists to Brunei and the neighboring Malaysian state of Sabah, both of which are up and coming ecotourism destinations. 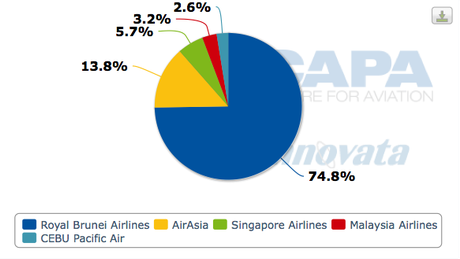 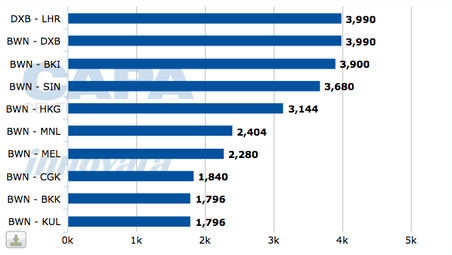 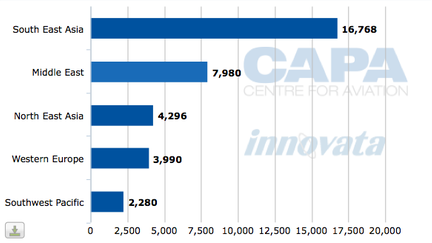