Republic Airways Holdings (-13.9%) slumped on Monday (08-Nov-2010) after the carrier announced it intends to offer 12 million shares of its common stock in an underwritten public offering. In addition, the company intends to grant the underwriters a 30-day option to purchase up to an additional 15% of shares sold.

Goldman, Sachs & Co and Deutsche Bank Securities Inc are serving as joint bookrunners for the offering. The company intends to use the net proceeds from the offering for general corporate purposes, including to finance a portion of its new Embraer E190 aircraft order, and to bolster its liquidity position.

Dahlman Rose analyst Helane Becker told Reuters the stock declined for the day as the offering will dilute existing stock values. Prior to the offering the group had 34 million outstanding common shares.

Shares also declined on news the company expects earnings per share (EPS) of USD0.10 at the most for 4Q2010. According to Bloomberg, analysts on average expect the carrier to report EPS of USD0.18 for the quarter. During trading, the group reported a net profit of USD21.3 million, or USD0.58 per share.. It attributed the performance to the acquisition of Frontier Airlines and Midwest Airlines in 2009. Adjusted for items, the profit was USD0.62 per share, in line with analyst expectations, according to a survey by Thomson Reuters. The result was on revenue of USD261.6 million, compared with analyst expectations of USD713.7 million in revenue.

Also during trading, the LCC reported a 1.6 ppt improvement in load factor for the month, boosted by a 6.4 ppt rise in international loads and a 1.1 ppt rise in domestic loads. The result was on a 11.2% rise in traffic (RPKs) and an 8.8% increase in capacity (ASKs).

Jazz Air Income Fund (-0.7%) slipped after reporting a 24.6% decline in net income for 3Q2010, to USD19.1 million, as operating income, before the amortisation of the CPA asset, declined 22.7% to USD26.9 million. The result was on the back of a 0.2% decline in operating revenue to USD379.1 million. Jazz attributed the decline in income to foreign exchange, decreased flying and other pass-through costs under its agreement with Air Canada. 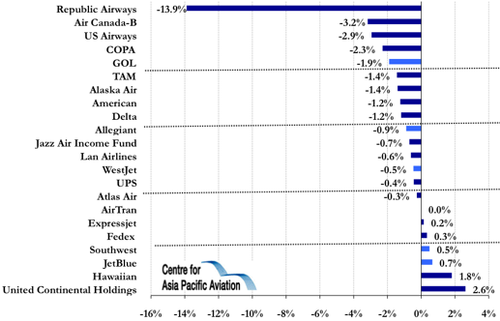