European and US markets were sharply lower yesterday on worries over the fallout from Greek debt, and aviation suppliers shares were not spared the sell-off.

Most heavily affected was AAR Corp, down 7.1%, and B/E Aerospace, down 6%. Aircraft leasing companies showed their sensitivity to market conditions again, with Aircastle, Aercap and Air Partner all dropping significantly.

Bombardier traded down 1.7%, despite more news that Qatar Airways is interested in its new CSeries aircraft. The Middle East carrier is looking at purchasing 20-30 aircraft and now hopes to conclude a deal before the Jul-2010 Farnborough Air Show. Some of the aircraft could reportedly go to the carrier’s new corporate jet unit, Qatar Executive. Qatar Executive was launched in Jun-2009 and operates a fleet of three smaller Bombardier business jets.

Qatar Airways has also announced it will accelerate B787 deliveries in 2011, from two to six aircraft. See the latest edition of The Monthly Essential Middle East for detailed information on Qatar Airways' latest fleet developments. 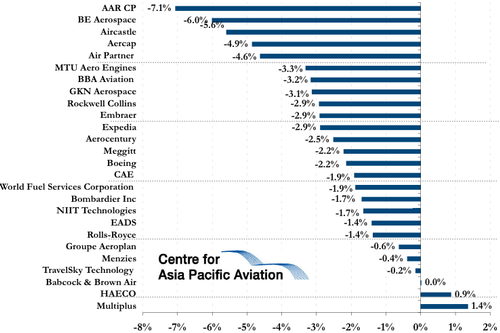