Qantas’ shares were up 1.7% yesterday, as CEO, Alan Joyce, in an interview with The Australian, stated the carrier is starting to see an improvement in demand, especially for Economy demand. However, he stated that yields remain “terrible”.

According to Mr Joyce, "we are seeing some life in the marketplace. We are seeing, in recent months, the volumes being a bit better than we were expecting. He added, "the first prerequisite of getting the yields back is that the demand is there…Our yield is still bad, it is still over 20% down internationally and in the low teens down domestically, but volumes are better than expected”.

As a result, the carrier is now considering increasing Economy and Premium Economy seating on some short international services, potentially reducing the number of First class seats - a move aimed at improving overall yields by approximately 8%.

SpiceJet “got killed” in Sep-2009 on yield slump, but profitability in Dec-2009 quarter and the full year expected

In India, SpiceJet’s shares closed 1.7% down yesterday. The carrier’s stock has gained 85% in the Sep-2009 quarter, outpacing the broader market's 18% rise.

SpiceJet CEO, Sanjay Aggarwal, stated the LCC expects to report a loss in the Sep-2009 quarter, on sharply lower average ticket-prices and with load factors of around 75%.

Mr Aggarwal told Reuters, “this quarter got killed" lower yields and weak demand". He added, "you look at the 35% drop in yields. All that means is airlines have created less revenue. The money is not coming." However, the carrier stated it has seen conditions improve in the past few weeks, creating expectations of a profit in the Dec-2009 quarter and in the full year. SpiceJet is reportedly planning to raise USD43 million in fresh debt before the end of the current financial year.

Japan Airlines’ shares slumped 10.9% yesterday, for the largest decline since 24-Sep-2009 after the Yomiuri newspaper reported JAL's creditors may resist a “large debt write-off” of debt by the carrier.

According to Japanese Investment Advisory Firm, Value Search Asset Management Co, “it’s not going to be easy for Japan Airlines to win the understanding of banks to forgive debt. Investors are concerned.” 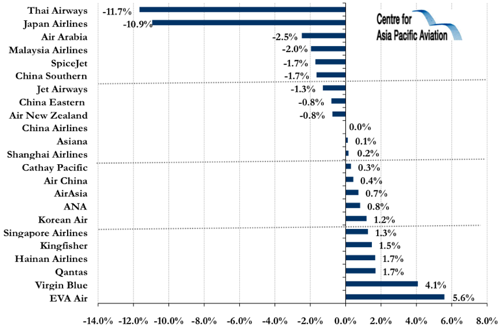