However, despite the continued yield weakness, which continues to pressure the carrier’s financial health, Qantas stated that yields are "not getting worse". Qantas Group passenger numbers were up 4.6% to 3.5 million, as growth by QantasLink, Jetstar Domestic and Jetstar International (+1.2%, +1.1% and +96.7%, respectively), offset a 24.2% slump in Qantas International passenger numbers. Group Load factor gained 0.7 ppts to 82.9%, to its highest level in 19 months.

Thai Airways, meanwhile, gained 2.6% yesterday, recovering from an 8% loss over the previous two sessions in reaction to a possible share issue. A final decision on the matter, aimed at strengthening the carrier’s long-term capital structure, will be made in Dec-2009.

Elsewhere, Japan Airlines gained 1.2%, with Cathay Pacific and Singapore Airlines both down, by 0.4% and 1.1%, respectively.  Singapore Airlines on Monday was downgraded by UBS to ‘sell’, citing a yield squeeze and earnings deterioration this year. 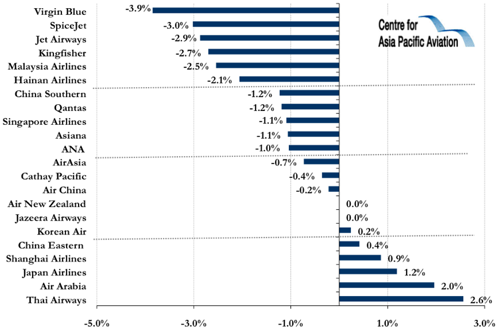