Qantas has controlled costs and benefited from a surge in profits at its Jetstar and Frequent Flyer businesses to report a profit before tax (PBT) of AUD90 million for the six months ended 31-Dec-2009 and an underlying PBT of AUD267 million, but warned of difficult times ahead and decided against a dividend to shareholders. The airline issued a very cautious outlook, expecting underlying PBT for the full year ending 30-Jun-2010 to be in the range of AUD300-400 million “subject to no further significant change in market conditions and fuel prices”.

Total international capacity (all airlines) to/from Australia rose 4.8% year-on-year in 2009 to 34/2 million seats, according to OAG, including a 4.7% increase in Dec-2009 to 3.1 million seats. (Worldwide international capacity fell 3% last year, according to IATA, underscoring the resilience of the Australian market, and the preparedness of foreign airlines to put capacity into the Australian market as other markets struggled). 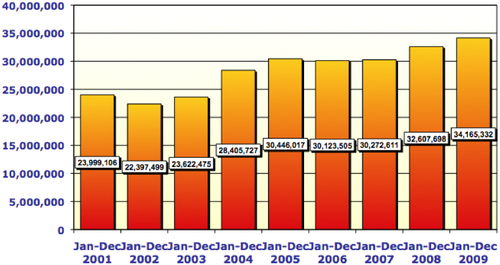 The likelihood is for higher international capacity growth to/from Australia in 2010 than 2009, as foreign carriers, led by the expanding Middle East airlines, continue to add capacity into the relatively robust Australian market. This will place further pressure on Qantas’ yield recovery - even if economies improve - and justifies the airline’s cautious outlook.

Margins are already slim, and rising input costs and the airline's cautious outlook (which fell short of analysts' projections), have spooked investors. Qantas’ shares fell up to 7.4% in early trade in Sydney today.

Mr Joyce stated, “maintaining a First offering on flagship routes is essential for Qantas as a premium airline”, but added, “it is vital that we align this offering with forecast demand which is expected to be relatively slow, compared to Business, Premium Economy and Economy”.

12 A380 aircraft would continue to offer 15 First Class suites on daily services from Sydney and Melbourne to London via Singapore and Los Angeles only, while the eight remaining A380s (to be delivered from 2012) would offer a three-class configuration and with no First cabin.

Qantas stated that final A380 seat numbers are to be confirmed, subject to discussions with Airbus and suppliers, but noted, “they will also add the equivalent capacity of more than three B747-400s, ensuring we can support future growth while reducing the need to purchase additional aircraft”.

Nine Qantas B747-400s will be upgraded and fitted with Qantas’ A380 standard seats and inflight product under the programme, with First Class cabins removed and Business seats installed in their place. The new B747-400 three-class configuration will offer 359 seats (58 Business, 36 Premium Economy and 265 Economy) - an increase of 52 seats overall – or a 16.9% increase in capacity.

Meanwhile, Jetstar, which reported a record half-year while increasing capacity by 32.9% across its network will continue to aggressively expand its capacity supported by additional A330 capacity ahead of the arrival of the B787,

While Qantas does not provide a breakdown, its domestic and regional operations are likely to be subsidising heavy losses on international operations, with mainline EBIT falling 38.8% to AUD60 million in the six months to Dec-2009. Jetstar and the Qantas Frequent Flyer programme are contributing strongly to the bottom line, helping the group report stronger pre-tax profits, despite sizeable reductions in Group revenue.

Qantas’ revenue slumped 13.4% in the fiscal first half (six months to 31-Dec-2009), reflecting a 13% drop in passenger revenues (over AUD1 billion was carved off the top line), as yield (excluding exchange) plunged 15%, “driven by price discounting in competitive markets and lower demand in premium segments”, as well as lower fuel surcharge revenues.

On the cost side, Qantas reduced operating expenditure ahead of the fall in revenue. Costs fell 16.2%, including a 7.8% reduction in staff costs (a creditable result, but still well short of Singapore Airlines’ 26% reduction in its fiscal third quarter), a 9.7% reduction in aircraft operating costs (reflecting lower utilisation and a 2.2% reduction in ASKs) and a 32.5% reduction in fuel costs. Overall costs fell 13.2% (including finance expenses). 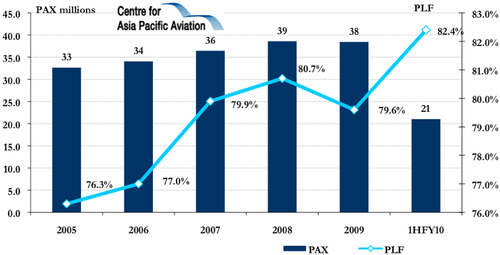 Overall, Qantas mainline had a horrible 2009, losing quarter of a billion dollars in calendar 2009, but it restored some respectability in the second half, while Jetstar went from strength to strength and Qantas Freight turned its business around. The Frequent Flyer unit had a better first six months of 2009 than the second half, but is still by far the strongest contributor in the Group.

2010 should be better, but investors hoping for a rapid recovery have clearly been upset by the airline’s expectations of a slower climb out of last year’s heavy turbulence. FY2008's record AUD1.4 billion profit looks a long way off. 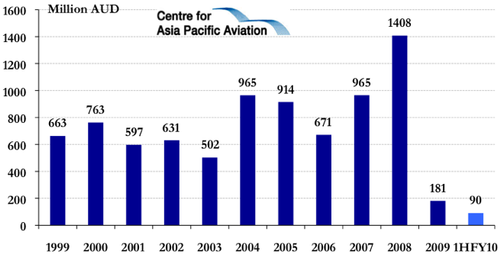 Although not broken out separately, the "profitable growth of Qantaslink" probably means strong profits on the carrier's near-monopoly routes.

Faced with a weak economic recovery at best, the biggest risk for Qantas in the domestic market is rapid expansion of capacity. 2009's result was aided by reducing Qantas capacity, but the mainline carrier "will be restoring domestic capacity, adding 340,000 seats over the next 12 months".

This is only part of the story, because both Virgin Blue and Tiger (as well as Jetstar) will be throwing additional seats into domestic routes as well. The result: continuing pressure on domestic yields. This will be unwelcome, coming together with much greater competition for corporate accounts.

Qantas' overall strategy is however coming to the rescue; the magnificent frequent flyer programme is the real cash cow. Meanwhile, the two brand strategy, growing Jetstar aggressively, gives Qantas Group a very valuable option that few others can match.