A solid result for Qantas Group for FY2010 illustrates a drastically changed company from where it was a decade ago. The only continuing profit centre from those days derives from the near-monopoly the Group has on domestic regional operations, the only area where the Qantas brand has expanded. Meanwhile, the highly lucrative frequent flyer programme (FFP) and low cost subsidiary, Jetstar, have generated all but a few dollars of the Group’s profitability over the past difficult year to 30-Jun-2010.

It is hardly necessary to go past Qantas’ own words to express where the Group is heading: “Qantas Frequent Flyer achieved a record Underlying EBIT of AUD328 million which was AUD102 million higher than the comparative full-year.” (Note: this includes some accounting changes too).

This profit comes out of a total Group EBIT for the year of AUD468 million, of which Jetstar contributed another AUD131 million.

The high earnings from the programme however are coming at a cost. As Qantas reduces online capacity, and load factors creep up, the number of seats available for redemption diminishes: “The reduction in Qantas capacity has resulted in lower Classic Award redemptions. However, Any Seat and Frequent Flyer Store redemptions have increased 21% and 8% respectively, resulting in an overall increase in redemption margin of 10%.”

Thus, as planned, the inflated-cost “Any Seat” pricing is now generating substantial yields for the airline, often well above the “open” market cost of the seats involved. The combination of high “charges” (such as eg “fuel surcharges” which go straight to the airline’s bottom line) applied to redemptions and the lack of available “classic” seats are also driving a higher level of purchases from the FF Store. This is all good strategy, because it removes large lumps of contingent liability from the Group’s accounts.

But the squeezing of these programmes, which started as pure loyalty strategies, are now becoming one of the consumers’ biggest beefs, along with not always transparent ancillary charges.

The last people Qantas should be upsetting are their largest frequent flyers, just as Virgin Blue seeks to penetrate the powerful hold that the bigger Group has on corporate business.

According to the report, “Substantial capacity growth during the year increased Jetstar’s passenger revenue by 21%.” This was on the back of an overall 50% increase in international capacity. New Zealand domestic routes were also transferred to Jetstar. And the Singapore operation is starting to gain traction, so that Jetstar Asia reported an EBIT of SGD6.9 million for the year; “the Singapore base provides a strong platform for future growth in Asia” now, says Qantas.

Domestically in Australia, Jetstar is “accelerating A320 deliveries for growth” increased capacity and will, in due course, be the first in the group to take delivery of B787 equipment to embark on the next phase of international expansion.

Meanwhile, Qantas mainline has again contracted, even in the face of significant expansion in capacity overall in international markets to/from Australia. Qantas mainline achieved an Underlying EBIT of AUD67 million for the full year, AUD63 million above the prior year result. This result reflects “effective capacity and yield management during tough economic conditions”, according to Qantas.

Passenger revenue declined 10% compared to the prior year primarily due to capacity reductions (-9.4%) across the international network “which was required to mitigate the softening in demand experienced as a result of the economic downturn.” 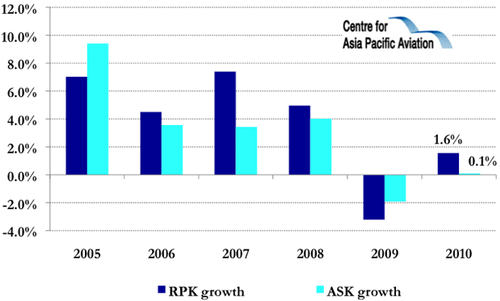 QantasLink however is aggressively expanding, riding the resources boom. The unit expanded its fleet by 15% in the past 12 months, adding seven new Q400s.

In terms of future profitability, the direction of fuel prices and yields will be crucial. The latter are looking decidedly shaky, as the global economy remains highly uncertain and industry capacity levels continue to rise.

The emerging threat, according to Qantas, is new capacity being added in coming months, while the leisure market remains weak, even as business traffic is picking up.

Qantas stated, “In the Australian domestic market, business demand was also adversely affected (in the year to Jun-2010). Domestic capacity was managed carefully over the year, but, as market conditions improved, airlines have returned capacity. While business demand continues to improve, this capacity growth has placed some pressure on the low fare end of the leisure market.” Elsewhere Qantas also notes, “domestic leisure competition in the last quarter of FY2010 was intense”.

Weak premium demand impacted international yields particularly in the first half of the year and while yields began to recover in the second half, this was impacted by international events including Icelandic volcano disruptions and political unrest in Bangkok.

Overall, Qantas remains cautious about the outlook. Noting that domestic business and total international revenue are expected to improve, domestic leisure continues to be highly competitive.

Investors too have displayed some concern, sending the carrier’s shares down as much as 3.2% in early trade in Sydney, though the stock has recovered some ground since then.

Qantas notes that trading conditions have “steadily improved” and forward bookings indicate yields in the first half of FY2011 will be higher than the first half FY2010. That is not saying much, given the deep hole the carrier was in this time last year.

The Group expects to increase capacity in first half FY2011 by 9.6%, driven mainly by Jetstar and QantasLink. Fuel costs for the first half of FY2011 are estimated to increase by 13% year-on-year (based on estimates as at 09-Aug-2010), due to higher forward market jet fuel prices and increased flying.

Overall, margins remain lean, but Qantas is hopeful of better times ahead.

Qantas expects first half Underlying PBT for FY2011 to be “materially stronger” than first half FY2010 if present conditions continue, but warned that changes in fuel prices, FX rates and general trading conditions could “rapidly impact earnings”.

The airline therefore declined to provide a more specific forecast, “given the volatility and uncertainty of the aviation market”.