European airline shares climbed again on Friday (03-Sep-2010) as wider markets reached a three-week closing high. Markets were up on news US employment declined much less than expected in Aug-2010, a sign the economic recovery is performing better than previously thought.

Passenger numbers for Aug-2010 meanwhile fell 0.1%, to 3.2 million. However, the carrier stated market conditions remain as previously anticipated, with overall summer volumes slightly lower than the peak levels seen last year and strong yield performance in both premium and non-premium.

Air France-KLM (+0.7%) also gained marginally despite stating it expects some disruptions to flight operations from national strikes related to reforms proposed for the national pension system. The strikes are to be held on 07-Sep-2010.

European investors are meanwhile awaiting Air France-KLM’s Aug-2010 traffic results as an indicator of how the European economy is recovering. Also due to report this week are Air Berlin (+1.2%) and easyJet (+1.9%). 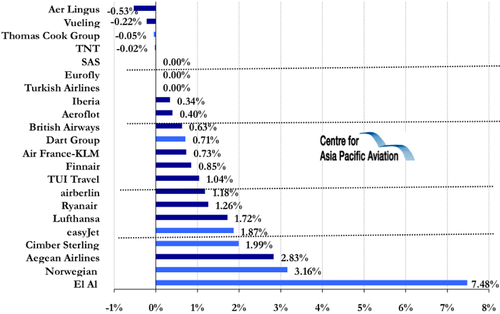