Pegasus has one of the lowest levels of unit cost among European airlines. It has successfully used its low cost base to offer low fares, thereby stimulating strong double digit growth in passenger numbers, both in the Turkish domestic market and on international routes. An IPO in 2013 strengthened its balance sheet and provided liquidity to help fund an order book that includes 75 A320neo family aircraft.

However, after increasing its annual operating profit in 2013, a pattern of deteriorating profitability began in 4Q2013 and has continued into 1Q2014 with a significant widening of losses. The weaker TRY played a part in this and the winter quarters are seasonally weak for demand and profits, so they do not always indicate full year trends. Nevertheless, this reversal of profit trends cannot be dismissed so easily.

Rival Turkish Airlines is growing capacity in Pegasus' main hub at Sabiha Gökçen, placing significant pressure on yields, and this increases the need for Pegasus to seek further cost savings.

Due to the high proportion of Pegasus' expenses that are in USD (53% in 1Q2014) and the low proportion of its revenues in USD (10%), the result was adversely affected by the weakening of TRY, whose average value against USD fell by 19% year on year. 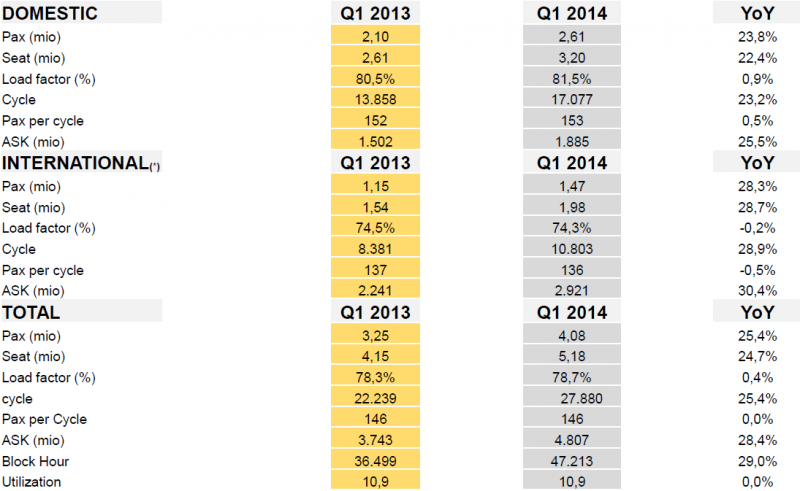 Pegasus revenues were up 32.6%

Reported revenues grew by 32.6%, but the prior year numbers include a minor contribution from the discontinued airberlin Turkey franchise operation. On a like for like basis (ie excluding airberlin Turkey from 1Q2013 figures) revenue growth was 35.8%, faster than the growth in ASKs.

RASK weakness in EUR terms is prompted by increased competition

In TRY terms total revenue per ASK increased by 5.7%, but this masks a significant RASK decline in EUR terms (-17.9%). On international routes, where EUR is the principal benchmark currency, Pegasus is facing increased competition at its Istanbul Sabiha Gökçen hub from Turkish Airlines (THY). THY's main hub at Istanbul Ataturk is essentially full and so it is growing capacity at Sabiha Gökçen, in direct competition with Pegasus.

Pegasus CFO Serhan Ulga told analysts on a conference call to discuss the 1Q2014 results that he was confident in his airline's cost base and product compared with THY, but that the increased competition meant some pricing uncertainty.

Operating cost per ASK, CASK, increased by 29.5% on the basis of reported TRY figures. Much of this was due to foreign exchange movements: on a EUR basis, the increase in CASK was less than 1%. Either way, CASK growth was faster than RASK growth, leading to the plunge in the operating result.

Mr Ulga told analysts that costs were adversely affected by a number of structural and timing changes. These included a change in ground handling activities at Sabiha Gökçen, an increase in marketing spend after no similar expense a year earlier, changes to the consolidated scope of the group's companies, an employee performance bonus, delayed flight costs and a change in engine overhaul provision.

Pegasus' profits, as reported in TRY, are sensitive to movements in foreign exchange rates. While TRY is its most important currency for revenues, accounting for 46% in 1Q2014, it only accounts for a small proportion of costs (19%). By contrast, USD accounts for 53% of costs and only 10% of revenues. 41% of revenues are in EUR, which accounts for 27% of costs. 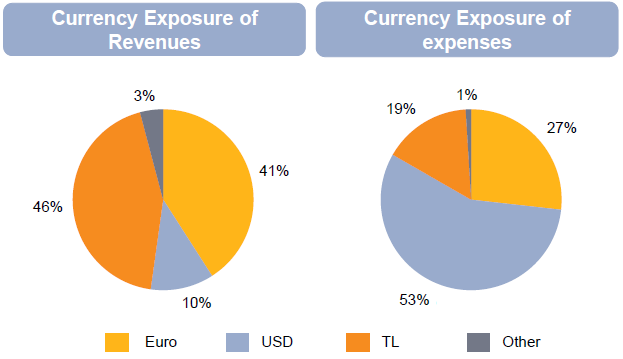 Pegasus hedges both its currency exposure and its fuel price exposure to a greater or lesser extent. In addition, where possible, it is taking action to increase TRY-based supplier contracts and to reduce USD contracts. Nevertheless, the currency imbalances and sensitivity are likely to remain, with any further TRY weakening against USD providing an ongoing profit headwind. 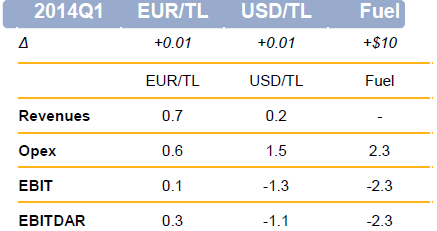 Pegasus' fleet will grow by five aircraft during 2014

Pegasus downgrades its 2014 profit outlook; a time to guard against unit cost increases

In terms of Pegasus' outlook and guidance for 2014, it still expects ASK and passenger growth of around 20%, higher load factor, stable RASK and stable CASK versus 2013 (in EUR terms). However, whereas its previous guidance included an EBITDAR margin target of between 21% and 23% (similar to 2013's 22.3%), it now expects this to be between 17% and 19%.

2014 has started relatively badly for this generally profitable airline. In EUR terms, the 1Q2014 CASK increase of 0.6% was not too far from Pegasus' FY2014 target of stable CASK. However, competitive pressures at Sabiha Gökçen contributed to a 17.9% RASK decline (in EUR) and this makes the FY2014 target of stable RASK quite challenging.

Pegasus had developed a good track record of achieving a positive spread between RASK growth and CASK growth in its annual results. It managed this for FY2013, but the spread turned negative in 2H2013 and this unwelcome trend has now continued into a third quarter.

There may be valid reasons for CASK growth now outpacing RASK growth, both in terms of one-off costs and competitive pressure on unit revenues, but Pegasus cannot allow this to become a new pattern.

This would be to throw away the benefits of having developed one of the lowest cost structures in Europe.