Pegasus is demonstrating strong profitability following its IPO in Apr-2013, since when its share price has doubled. It is now among Europe’s more profitable airlines and one of its lowest-cost practitioners. In 3Q2013, the underlying operating result of the core operation increased by 18% compared with last year and this result has more than doubled over the first nine months of the year.

However, net profit fell in 3Q2013 as the weakening Turkish lira led to adverse foreign exchange impacts on the profit and loss statement. In addition, the operating margin declined year-on-year in the quarter as RASK growth was outpaced by CASK growth. It is not time to take any drastic evasive action, but it seems even the more financially robust airlines cannot avoid some turbulence at times.

Net profit falls in 3Q, but operating result up 18% for core operation

In 3Q2013, Pegasus Airlines saw a 27% fall in its net profit to TRY115 million (EUR41.57 million). However, financial expenses were burdened by a foreign exchange loss of TRY40 million (EUR14.45 million), whereas they were lightened last year by a foreign exchange gain on TRY29 million (EUR10.48 million). This is a non-cash expense related to the translation of loans in foreign currency back into Turkish lira. Without this adverse swing of TRY69 million (EUR24.94 million), net profit would have been up year-on-year.

For the first nine months of 2013, the core Pegasus operation grew its revenues by 33% and more than doubled its operating result to TRY319 million (EUR115.28 million) (before other operating income and expenses). Net profit for the group increased by 83% to TRY162 million (EUR58.54 million) in the first nine months. The 3Q result was adversely affected by the weakening of the TRY against USD and EUR, since it has more costs than revenues in international currencies.

*Operating profit before Other operating income and other operating expenses
Source: CAPA – Centre for Aviation and Pegasus Airlines

In 3Q2013, Pegasus increased its ASKs by 20.1%, with a slightly higher rate of growth in the domestic market and slightly lower in international markets. The growth in the numbers of seats was a little faster at 20.8%, suggesting a modest decrease in average sector length. Passenger load factor (passengers/seats) grew by 0.9 ppts to reach 82.8% and passenger numbers were up 22.1%. Daily aircraft utilisation reach 14 block hours, compared with 13.3 block hours in 3Q2012.

The 30% increase in core Pegasus revenues was faster than the growth in ASKs in 3Q. This reflected an increase in scheduled flight revenues (78% of the total) by nearly one quarter, boosted by a 44% increase in ancillary revenue and a 46% increase in charter revenue.

Ancillary revenue per passenger grew by 18% to TRY19.3 (EUR6.97), mainly as a result of increased penetration of existing ancillary products and services. 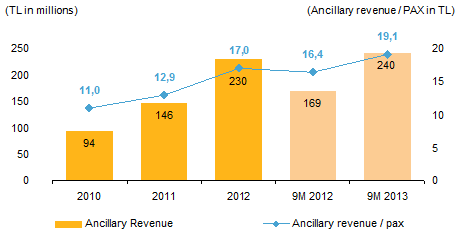 Total operating costs for the group increased by almost 30% in 3Q2013 and by 35% on a like-for-like basis excluding the airberlin Turkey costs from last year’s figures. Both of these figures outpaced the respective revenue growth rates (which is why operating margins declined) and the increase in ASKs.

Fuel costs, which accounted for 44% of the total, grew by 26%, slower than total costs, but faster than ASK growth. Labour costs increased by 45% and all other costs by 41%.

Increased unit costs ex fuel were driven by the non airline consolidated subsidiary Izmirliler Otelcilik (which does not generate ASK); timing differences in some maintenance expenses accelerated due to high aircraft utilisation; and the new ramp contract and self traffic handling at Sabiha Gökçen Airport (commenced Jun-2013). It will be important that Pegasus can demonstrate in the future that these effects are only temporary.

Unit costs, as reported in TRY, were also adversely affected by the fall in value of the Turkish currency compared with the same period a year earlier. Translated into EUR, Pegasus’ CASK fell by 3.2% and its ex fuel CASK was up by 2.4%. It is also worth noting that, while currency movements inflated its reported costs, they also boosted reported revenues. RASK translated into EUR decreased year-on-year.

2013 outlook unchanged, but European yields expected to be weak

For 2013, Pegasus continues to target passenger growth of around 15% and to grow ASK capacity at a rate of 12% to 16% per annum over the next three years. It sees utilisation rates for 2013 at a similar level to 2012, although the first nine months saw a 7.6% increase in block hours per day. It expects daily utilisation to increase in the future as more night flights are introduced and the network grows.

Pegasus says that forward bookings are in line with its budget into 4Q2013. It will continue to focus on enhancing its network in the north, south and east of Turkey and to maintain cost control and improved cost efficiencies. It warns of continued pressure on yields in European markets, although it expects these partially to be offset by increased load factors.

Pegasus continues to aim for a load factor of more than 80% in the short to mid term (it was 78.2% in FY2012). In terms of costs, it anticipates stable CASK in the near term, but its Continuous Improvement Team (CIT) is pursuing further cost reduction initiatives and it plans to reduce CASK beyond the near term. One area with potential to deliver lower costs is Pegasus’ distribution channels. It currently makes 46% of its sales on the internet (first nine months of 2013, up from 41% for the same period last year) and aims to grow this channel, which is the most cost effective means of distribution.

Internet sales as a percentage of total sales

Strong financial performance in 2013, but no room for complacency

Pegasus’ financial performance so far in 2013, the year of its initial public offering, has been impressive. In the first nine months of the year, it grew passenger numbers by 22%, revenues by 24% and net profit by 83%. Its operating margin improved by 7.4 ppts to reach 17.3% (operating result before other operating income and expenses divided by revenues) as RASK increased by 9% and CASK by only 1%.

However the most recent quarter demonstrates that Pegasus will not always have everything its own way. Operating margin fell in 3Q2013, resulting from quarterly CASK increasing year-on-year and outpacing RASK growth for the first time this year. Moreover, net profit fell versus last year in 3Q, albeit due to foreign exchange rather than operational headwinds. Pegasus remains one of Europe’s genuine ultra-LCCs, but this set of quarterly results is a reminder that it cannot afford to be complacent.