Pegasus Airlines is Turkey's self-styled ‘network low-cost carrier’. It operates many of the features of the classic LCC business model: low fares, single cabin class, modern fleet, focus on internet distribution and a short/medium-haul network. But it also offers network feed (27% of international passengers in 2013) and product features that, until recently at least, have been less typically associated with LCCs in Europe. These include belly cargo, assigned seating and the use of both GDS and travel agents.

In spite of these ‘deviations’ from the purist LCC model, Pegasus has the second lowest unit costs among European airlines, bracketing it with Ryanair and Wizz Air in the ultra-LCC category.

In 2013, Pegasus increased its core operating profit by 40%, although currency movements hit the net result and a trend of rising CASK in recent years will need to be controlled. Although partly driven by exchange rate movements, and offset by a rising RASK trend, CASK increases do not sit well with any version of the LCC model.

Pegasus reported a 30% drop in net profit for 2013, to TRY88 million (EUR35 million). This result was significantly affected by foreign exchange losses on non-Turkish Lira denominated assets and liabilities. The group’s operating profit increased by 46% to TRY276 million (EUR109 million), or, by 40% to TRY279 million (EUR110 million) without the small loss of the airberlin Turkey operation.

Performance weakened in 4Q2013, with the operating result in the core operation falling to a loss of TRY41 million (EUR15 million), versus a profit of TRY51 million in 4Q2012.

Pegasus’ group revenues grew by 146% between 2010 and 2013 at a compound average growth rate of 35% pa. Although the rate of growth is slowing a little, it remains one of the fastest growing airlines in Europe by revenue growth. Moreover, the increase in operating profit in 2013 confirms the trend of improving profitability after the dip in 2011.

The IPO of Apr-2013 raised TRY483 million (EUR164 million), helping to increase the group’s cash balance from TRY210 million at the end of 2012 to TRY877 million (EUR298 million) at the end of 2013. This is equivalent to 133 days of revenues, providing a very substantial liquidity cushion.

On balance sheet net debt fell by TRY468 million to end the year at TRY749 million (EUR254 million), while book equity increased from TRY327 million to TRY1,146 million (EUR389 million). Adjusted net debt, including operating leases capitalised at eight times annual payments, fell from TRY1.9 billion to TRY1.7 billion. All in all, Pegasus’ balance sheet looks to be in a robust state of health. 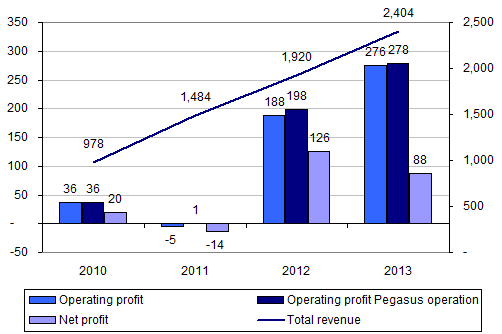 Pegasus' load factor was up 2.0 ppts

Pegasus’ passenger numbers increased by 23.9% to 16.8 million in 2013, with ASKs up 22.7% and load factor gaining 2.0 ppts to reach 80.2%. Load factor has improved by almost 5 ppts since 2011 and is broadly similar to the average levels achieved by legacy carriers in Europe (ie AEA members), but it remains short of those reported by Europe’s two largest LCCs (around 82% for Ryanair and 89% for easyJet). 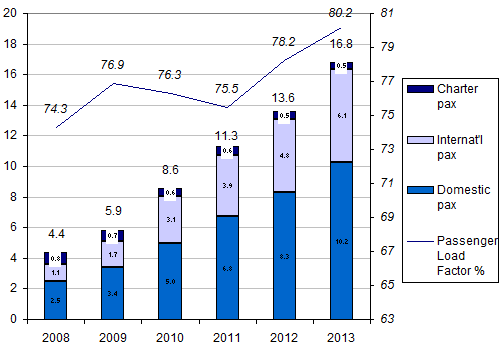 Transfer passengers (those taking two or more successive Pegasus flights under one ticket) accounted for 27% of international passengers (up from 24% in 2012). This feature of Pegasus marks it apart from the typical LCC business model in Europe (with the other notable exception being Vueling). 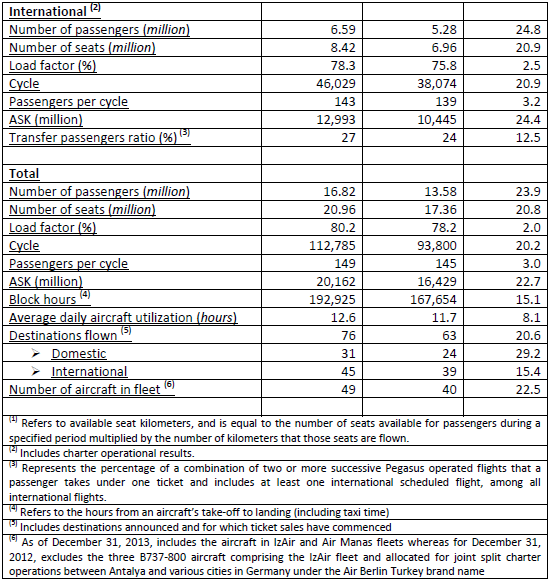 Core revenues up more than one third

Costs grow faster than ASKs, but less than revenues

Operating costs in the core Pegasus operation increased by 32.8%, less than revenue growth, but faster than ASK growth and passenger growth. As with costs, revenues were inflated by the weaker TRY (core operating costs translated into EUR grew by 21.4%).

Pegasus' labour productivity has however slipped

Labour costs, 13% of the total, grew by 39%, although average headcount grew by only 26%. Translated into EUR, labour costs grew at the slower rate of 27%, but still outpaced headcount growth.

The Pegasus fleet consisted of 49 aircraft at the end of 2013. Almost all of these were Boeing narrowbodies, although the company leased two Airbus A320s during the year. At the end of 2013, it still had three more Boeing 737-800s to be delivered from the 40 ordered in 2005. (According to the CAPA Fleet Database, one of these has now been delivered and Pegasus has also taken its fleet of leased A320s to three aircraft, as of 6-Mar-2014).

Pegasus also has an outstanding order for 75 Airbus A320neo (and options for a further 25), with the first delivery under this order expected in 2016. Pegasus expects to finance the neos with Export Credit Agency financing, EETCs and JOLCO structures, at least for the first half of the deliveries.

Speaking at Pegasus’ Capital Markets Day in London, CEO Sertac Haybat said that the cost disadvantages of operating a dual fleet would be offset by the lower fuel burn of the A320neo compared with the Boeing 737-800. He also saw additional route opportunities from the longer range of the new Airbus aircraft. Developments in Turkey’s bilateral agreements will continue to be a key factor in the expansion of Pegasus’ international route network.

20% growth planned in 2014, with stable RASK and CASK expected

Pegasus plans to grow ASKs and passenger numbers by around 20% in 2014, outgrowing expected market growth by around 10%.

It aims to achieve further load factor gains and to exceed 82% over the mid term. Competitive pressure at its Sabiha Gokcen base, where Turkish Airlines is increasing its presence due to the lack of capacity at Istanbul Ataturk, is likely to lead to downward yield pressure.

Pegasus expects that load factor gains will offset yield declines, leading to stable RASK in 2014. It is also guiding towards stable unit costs. The relative development of RASK and CASK is key to the development of operating profit and recent history shows that, for Pegasus, both grow typically.

Currency movements had an impact on unit costs: in EUR terms, ex fuel CASK increased by 4.4% and total CASK fell by 1.1%. Around 84% of Pegasus’ operating costs are in USD (57%) and EUR (27%), which means that they are inflated when translated into TRY if the Turkish currency has weakened (as happened in 2013).

A large part of the remaining ex fuel CASK increase was due to a change in ground handling arrangements at Sabiha Gokcen and changes in shifts for maintenance workers. These items particularly affected 4Q2013, when CASK was up 19.7%.

Fortunately, growth in RASK (revenue per available seat km) was 8.9% in 2013, faster than CASK growth for the year. More than half of Pegasus' revenues are in EUR (41%) and USD (11%) and this portion of revenues was inflated when translated into TRY due to the weakening of the Turkish currency during the year. Expressed in EUR, unit revenues were down by 0.4%.

The CASK increase in 2013 came in spite of a longer stage length, but was mainly explained by currency and the changes noted above. Certainly, it will be important for Pegasus to demonstrate that this disproportionate CASK increase, compared with sector length, is not repeated in 2014. It still has one of the lowest levels of unit cost in Europe, but will need to work to ensure it does not continue to creep upwards.

Pegasus has managed to increase RASK ahead of CASK, with unit revenues growing by 47% from 2010 to 2013. This suggests that, in spite of rapid capacity growth, it has a fair degree of pricing power as a result of having lower fares than its principal competitors. As long as its fares remain significantly below the market, it seems that it can raise them to offset cost increases. This is reinforced by a growing brand quality perception and strong product and service features.

…but can this be sustained?

Nevertheless, Pegasus should not rely on the recent trend of RASK growth outpacing CASK growth to improve profits. Rather, it would be better served by seeking to reduce its already very low CASK to protect itself from any interruption in its ability to grow RASK.

The second half of 2013 highlights the risks of relying on RASK growth. Pegasus saw a fairly uniform RASK growth of 8%-9% in each quarter of 2013, but the performance of CASK deteriorated sharply through the year. CASK fell by almost 6% in 1H2013, before rising 12% in 3Q and almost 20% in 4Q, exceeding the carrier’s ability to pass on cost increases through higher RASK.

Mr Haybat’s presentation at the Capital Markets Day in London made reference to Pegasus’ “relentless focus on cost control”. He will no doubt be seeking to demonstrate this in 2014. 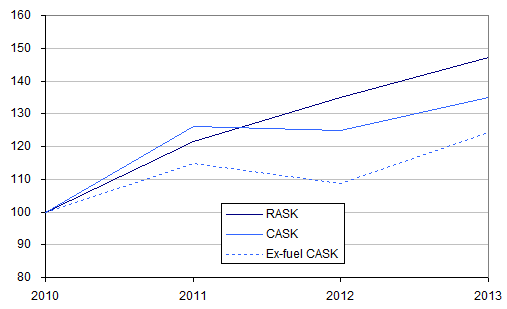