Papua New Guinea regional airline PNG Air is aiming to increase its domestic market share and resume international services following the completion of a transformation project. PNG Air is in the process of renewing its fleet with new ATR 72-600s, resulting in operational improvements and enabling it to compete more effectively against its larger rival Air Niugini.

PNG Air, formerly known as Airlines PNG, completed a rebranding exercise in late 2015 coinciding with the delivery of its first ATR 72-600. PNG Air has since taken delivery of two more ATR 72-600s and plans to take another four aircraft by the end of 2017.

The airline has focused entirely on the domestic market since suspending services to Australia and implementing a restructuring in 2013. However, PNG Air plans to resume international operations by the end of 2016 with a new route to Jayapura in Indonesia.

PNG Air began a major fleet renewal programme in Nov-2016, when it took delivery of its first ATR 72-600. The airline has since taken two more of the type and currently has commitments for another four ATR 72-600s.

PNG Air CEO Muralee Siva told CAPA on the sidelines of CAPA’s Asia Pacific Aviation Summit in Brisbane on 5-Aug-2016 that the airline plans to take the four ATR 72-600s remaining on order by the end of 2017. The next aircraft is slated to be delivered at the end of Aug-2016, with additional deliveries to follow in Nov-2016, May-2017 and Nov-2017.

Mr Siva said that the airline expected eventually to acquire three to five additional ATR turboprops, for a total of 10 to 12 aircraft, as part of a plan to transition to an all-ATR fleet by 2020 or 2021. PNG Air holds options for 14 additional ATR aircraft as part of the deal it initially forged with the manufacturer in 2014.

With the three to five additional aircraft PNG Air is considering acquiring the smaller ATR 42-600, or a planned new short take-off and landing (STOL) variant. Mr Siva expects ATR’s new STOL variant will be available from 2020 and be able to access smaller airstrips that the airline is now only able to access with the Dash 8-100.

PNG Air is also, for now, continuing to rely on the Dash 8 fleet for its cargo business, which accounts for approximately 20% of its revenues.

Initially PNG Air was announced as the launch customer for a new combi variant of the ATR 72-600. ATR certified the up to 44-seat ATR 72-600 combi in Oct-2016, just ahead of the first aircraft delivery to PNG Air.

PNG Air has returned four Dash 8-100s since starting the transition to the ATR 72-600. The airline plans to return the remaining 10 Dash 8-100s over the next four to five years.

PNG has focused on main domestic routes since 2013 restructuring

PNG Air previously also operated smaller De Havilland Twin Otter turboprops. But these aircraft were phased out along with services to smaller domestic markets in 2013 as part of a restructuring.

Under the restructuring the airline also dropped international services in 2013, including its own flights to Cairns and a (now suspended) codeshare with Virgin Australia to Brisbane.

With the introduction of the first batch of ATR 72-600s PNG Air has been able to improve its product significantly in markets served by its competitor with Fokker jets or Q400 new generation turboprops. Mr Siva said the response from customers so far had been very good, pointing out that the ATR 72-600 is much quieter and more comfortable than older generation turboprops.

He said the ATR 72-600 has also enabled PNG Air to improve its reliability. In Papua New Guinea there are no maintenance capabilities outside the capital, Port Moresby. As a result, if an aircraft goes tech at any outside station it significantly impacts the schedule.

With a more reliable new aircraft the integrity of the schedule improves along with on-time performance, resulting in a better product for the passenger. “That gives us an edge compared with the competition obviously. In terms of on time performance that is a huge thing”, Mr Siva told CAPA TV.

Link PNG’s Dash 8 fleet is also on average slightly more than 20 years old, according to the CAPA Fleet Database. Air Niguini’s Dash 8-Q400 fleet is newer, approximately seven years old, but its Fokker fleet is over 20 years old. The flag carrier’s overall fleet, which also consists of 737-700/800s and 767s for international operations, has an average age of 20 years.

New aircraft are extremely unusual for the Papua New Guinea market. Low aircraft utilisation rates – which cannot be avoided due to a lack of runway lighting and challenging weather – generally make it hard to justify the capital cost of new aircraft. PNG Air is so far averaging 180 hours per month on its three ATR 72-600s, or an average of six hours per day, which is higher than it initially forecast, but well below industry norms.

PNG Air is banking that its investment in new turboprops pays off through operational improvements and lower maintenance costs. Maintenance is key as Papua New Guinea has very high expatriate labour rates, making it expensive to bring in mechanics.

Its domestic capacity has already started to increase as a result of the transition to ATR 72s since some flights have switched from the Dash 8-100, resulting in a doubling of capacity. The average load factors on ATR 72 flights have so far have been very low, but PNG Air is confident that load factors will improve as its enhanced product starts to gain traction and more flights are upgraded.

Based on OAG schedules for the week commencing 22-Aug-2016 the airline is deploying the ATR 72-600 to Goroka, Hoskins, Kavieng, Kieta, Lae, Lihir, Madang, Mount Hagen, Popondetta, Rabaul and Wewak. However, not all flights to these destinations are operated with the new aircraft. 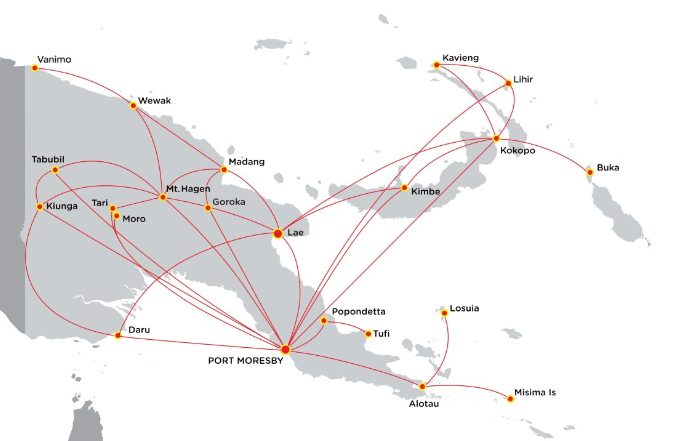 New brand links up with new business model and strategy

With the introduction of the ATR 72-600, the airline rebranded. A new livery and logo were introduced, including being applied on the older Dash 8s.

As the airline shed the Airlines of PNG name for PNG Air the idea was to take on a “next generation airline” image. Mr Siva said that the new brand borrows from the traditional links of Papua New Guinea but modernises it for the future.

“The response has been very strong”, he said, adding: “It links with the business model we have. We are growing the airline and improving the product and looking at the future. It’s a very future oriented, modern young sort of brand which is reflective of the feedback we are getting from the customers”.

PNG Air incurred a PGK14 million (USD5 million) charge in 2015 to cover rebranding and ATR induction costs. The airline narrowed its loss before tax from PGK23 million (USD 8 million) in 2014 to PGK10 million (USD3 million) in 2015. Revenues were lower by 6% to PKG206 million (USD69 million), but the airline’s cost base benefitted from lower fuel prices. (PNG Air does not report traffic figures.)

With the new brand the airline aims not only to win back market share, but also achieve growth with the overall market. Domestic traffic in Papua New Guinea has been flat the past three years, ending a period of approximately five years of rapid double-digit growth. The economy has slowed due to the reduction in oil prices and a lack of new gas projects.

However, Mr Siva expects that the domestic market will start growing again, as new gas projects are expected to commence in 2017 and 2018. The domestic market could again grow at double-digit rates over the next several years. Papua New Guinea’s GDP is still projected to grow 3% to 4% in 2016, despite the slowdown, and could again achieve GDP growth above 5% in the coming years. 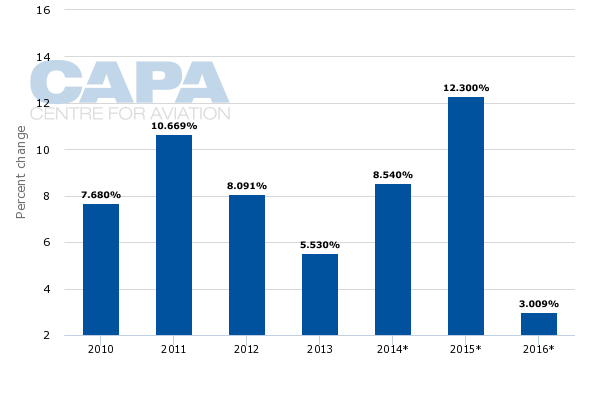 Faster economic growth and new gas projects will generate more international traffic, which in turn creates growth opportunities for the domestic operators. Business traffic – both domestic and international – has dipped over the past couple of years due to the weak economy. Leisure demand has remained relatively strong, but business traffic has historically been an important high-yielding component.

PNG Air could start to work with foreign airlines

PNG Air does not currently interline or codeshare with any airline or time its domestic flights for connections with foreign airlines serving Port Moresby. However, the airline will likely look at partnerships as part of a future growth phase. 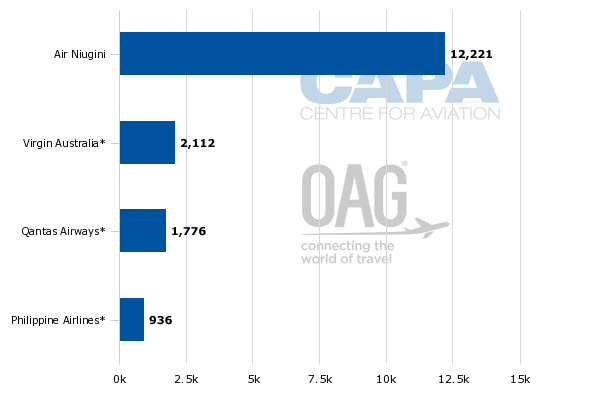 In addition to previously codesharing on Virgin Australia on Brisbane-Port Moresby, PNG Air operated to Cairns. PNG Air has not operated international flights since it dropped Cairns in 2013, but is planning to resume international services with service to Jayapura.

PNG Air originally planned to launch Jayapura earlier this year but has encountered delays – mainly on the Indonesian side. The Mont Hagen airport has been upgraded for international services and is ready for its first international route.

Mr Siva said that Mount Hagen-Jayapura was selected as is it not operated by a competitor. PNG Air believes that it can stimulate demand by enticing people who live in the Mount Hagen area to travel to Jayapura for leisure. “It gives us an opportunity to create this new demand rather than try to share existing demand”, Mr Siva said.

Mount Hagen is the third largest city in Papua New Guinea and the capital of the Western Highlands – one of the more populated regions. However, residents now need to travel via Port Moresby when going overseas. Jayapura will offer a new quicker option for Mount Hagen residents looking to leave the country for shopping, medical treatment or studies.

More international routes could be launched in 2017

Mr Siva said that the resumption of international services has been made possible as the airline is now completing the first phase of its transformation, in which it was focused entirely on the domestic market and implementing its new domestic strategy.

PNG Air has no immediate plans for other international destinations besides Jayapura. However it will reconsider Port Moresby-Cairns, as well as evaluating other regional international routes that are within the range of the ATR 72-600. A second international route could potentially be launched in 2017.

PNG Air does not have big international aspirations. The airline has no plans for jet aircraft, which would be needed to extend its network beyond east Indonesia and northeast Australia.

The airline is focused on domestic opportunities and continuing to improve its product in the local market. While the new aircraft has ushered in a new era for PNG Air the airline is still working on improving its product – both in the air and on the ground. For example, lounge access and a loyalty programme are in the works.

PNG Air will need to raise its profile and attract more passengers, including from potential airline partners. The acquisition of several ATR 72-600s represents a significant investment for a small airline in a difficult and remote region of the world. Securing sufficient load factors and yields will not be easy.