Oil prices slide back to USD70 per barrel

A nine day slide through early and mid-Dec-2009 brought oil prices back below USD70 per barrel in New York, but prices have come back slightly in the past few days, following a number of increased demand forecasts for 2010.

OPEC, which produces around one third of the world’s oil, revised its 2010 forecast for oil demand as global economies recover in 2010, led by the developing world. The US Energy Information Agency (EIA) forecasts revenue from OPEC oil sales would approach USD759 billion in 2010, some 32% higher than in 2008.

The International Energy Agency has also revised its demand and consumption forecast for 2010 upwards. However, lingering and underlying economic weakness and the expected end of government-spending led stimulus in some economies by mid-2010 has prompted some analysts to forecast either a status quo situation, or a retreat in oil prices from early in the new year.

In its latest industry financial forecast, IATA raised its 2010 oil price forecast to USD75 per barrel, with total industry expenses of USD123 billion. Oil prices for 2009 are expected to be around USD62 per barrel, for a total industry fuel cost of USD114 billion.

Jet fuel up in China, lower in India

Despite the drop in oil prices, the lag effect between purchase and consumption for airlines means that many carriers, particularly in North Asia, are increasing their fuel surcharges. Japan Airlines and All Nippon Airways intend to increase their passenger fuel surcharges from 01-Jan-2010.

More impetus to raise fuel surcharges has been provided by the Chinese Government, which raised the import tariff on jet fuel for 2010 from 5% to 6% on Wednesday.

However, Indian carriers received a boost from India’s state-owned oil companies, as they announced a 1.6% reduction in aviation fuel prices on 15-Dec-2009.

Oil prices for the week to 15-Dec-2009 fell another 2.7%, after the 7.4% decline in the previous week. Prices were below USD69 per barrel briefly, and have now retreated around USD10 from their mid-Oct-2009 highs above USD81 per barrel. 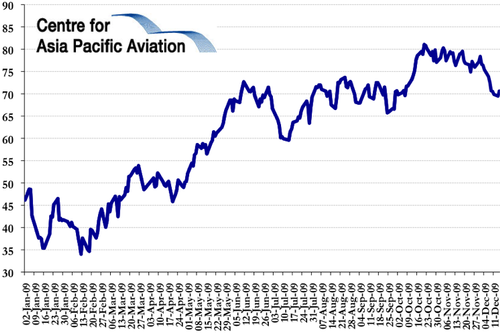 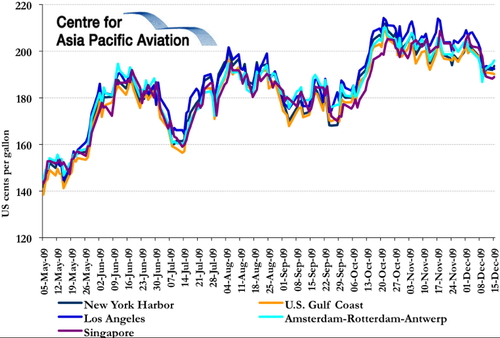