Norwegian Air Shuttle’s shares rose 4.0% on Friday, following Thursday’s 4.5% gain, following the release of its 3Q2009 results, in which the carrier reported a net profit of EUR45 million and an operating profit of EUR57 million (-10% and +146%, respectively), for an 11 ppt operating margin to an industry-leading 21%.

In the Australian market, Virgin Blue’s shares were up 3.6% yesterday, with Qantas’ shares also gaining (+1.0%).

Economic and traffic recovery in Brazil

GOL’s shares were up 2.3% on Friday, reflecting a stronger Brazilian market, after economic data revealed that Brazil's jobless rate fell sharply in Sep-2009, well below forecasts, and pointing to a faster rate of recovery than most other major economies. The jobless rate is now back to where it was before the global financial crisis. See related article: Brazil leading Latin American traffic recovery 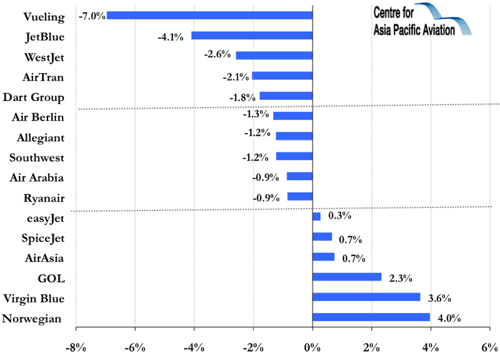