Norwegian's 2014 losses marked a dramatic slump after seven years of net profits (five years of operating profit). There had been some warning signals in 2013, when Norwegian's profits declined versus 2012, due to rapid capacity expansion, the launch of its first long-haul routes, delays to Boeing 787 deliveries and a very price competitive market place.

In 2014, most of these factors continued to weigh on Norwegian, for whom the weakening of the NOK was an additional challenge. A difficult year always seemed likely. Nevertheless, the size of its loss was worse than expected. Unit cost reduction failed to keep pace with the drop in unit revenues.

After another year of debt-fuelled fast capacity growth in 2014, Norwegian will take something of a breather in 2015, when its growth will be much more cautious. This should help unit revenues, but its 2015 CASK target suggests that it does not expect significant cost efficiency improvements other than from lower fuel prices.

Norwegian slumps to a loss after seven profitable years

Norwegian's 2014 net result was a loss of NOK1,050 million, compared with a profit of NOK319 million a year earlier. Analysts' consensus forecast for the net result had been a loss of NOK686.4 million, according to Bloomberg. The result was adversely affected by non-operating items including a mark to market loss of NOK0.5 billion on fuel hedging instruments related to 2015 fuel consumption.

The operating result, adjusted for the 'other gains and losses', deteriorated to a lesser extent, but still fell to a loss of NOK827 million in 2014 from a profit of NOK481 million in 2013. Revenue increased by 25% to NOK19,540 million. 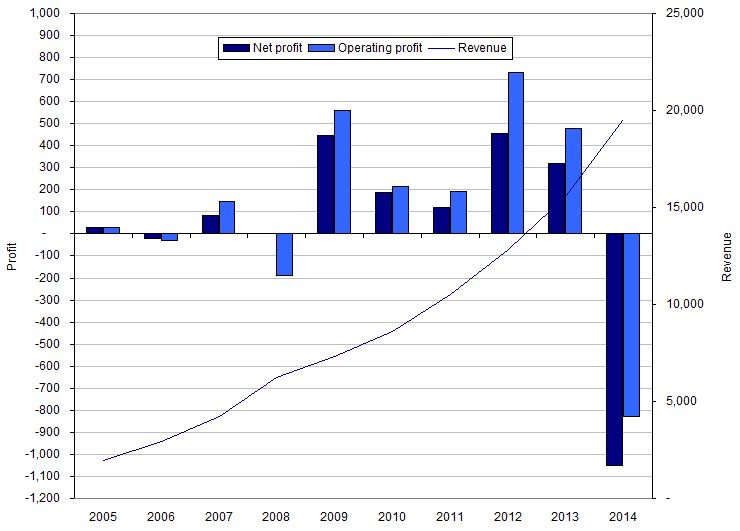 Operating loss in three out of four quarters; fall in profit in 3Q

Looking at the quarterly performance in 2014, Norwegian's operating result adjusted to exclude 'other gains and losses' was a loss in three out of four quarters. Only the seasonally strong 3Q2014 recorded a positive result, but this was still 3% below 3Q2013 in spite of revenue growth of 30%. The winter quarters (1Q and 4Q) are typically loss-making as a result of lower seasonal demand, but Norwegian reported particularly heavy losses in these quarters of 2014.

Accounting profits/losses can be affected by a multitude of non-cash items. Ultimately, airlines (as with all businesses) rely on cashflow in order to pay for their operating expenses and their capital investments. In this area, too, Norwegian had a bad year in 2014.

In order to fund this investment (mainly in new aircraft and pre-delivery payments) and to service its debt, Norwegian's borrowings increased significantly during the year. 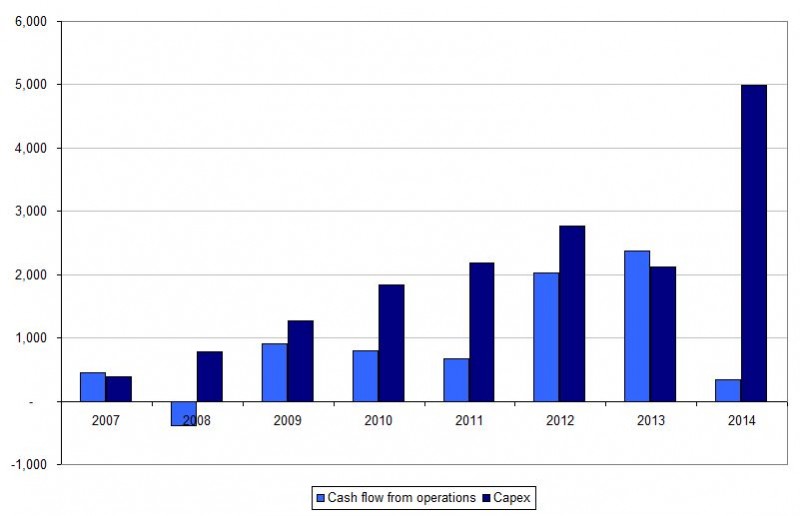 Norwegian's year end net debt ballooned by more than two and a half times from NOK4.3 billion at the end of 2013 to NOK11.3 billion at the end of 2014, with gross debt doubling to more than NOK13 billion. Its gross cash balance was down 7% to NOK2.0 billion, equivalent to only 38 days of revenues. The ratio of net debt to equity at the year end increased from 158% to 530%.

Norwegian has financing facilities in place to cover its capital commitments through to mid 2016, meaning that debt is expected to increase by USD345 million (NOK2.6 billion) at the end of 2015. It may have some flexibility to realise some cash through sale and leasebacks, but clearly this level of indebtedness is unsustainable.

Norwegian says that its debt contains no covenants restricting its activity in the event of debt levels reaching certain pre-determined levels. The absence of such covenants gives airlines flexibility in deciding their capacity and financing strategies, but can also lead to a lack of capital and financial discipline. 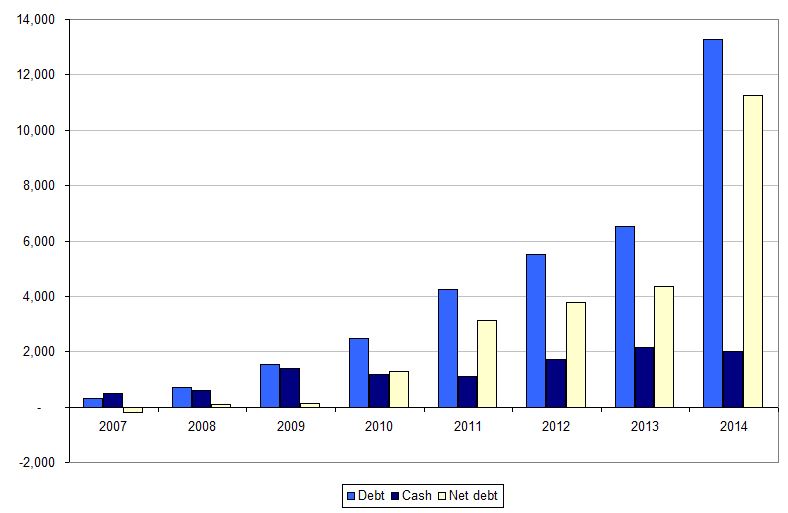 In 2014, Norwegian increased its ASKs by 35%, with RPKs up 40% and load factor gaining 2.6 ppts to 80.9%. Passenger numbers grew at the lower rate of 16%, to 24 million. The superior growth of ASKs and RPKs reflects 12% longer average stage lengths resulting form Norwegian's long-haul expansion. The airline does not separately report traffic data by region, but its FY2015 results presentation says that 5% of its passengers were on long-haul routes in 2014. 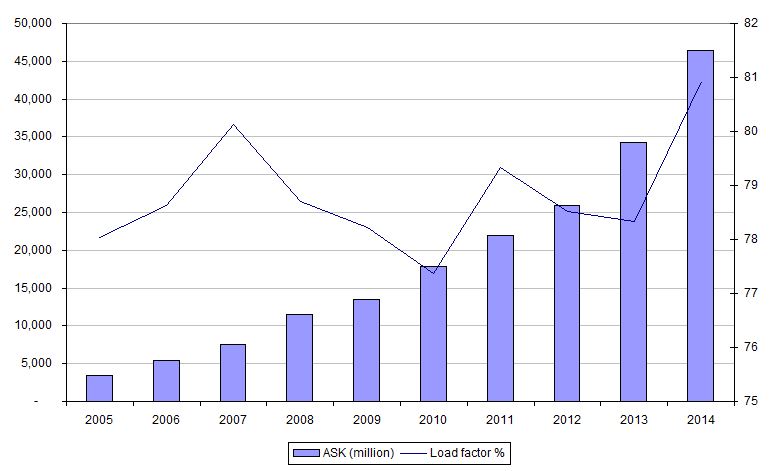 Focusing on Norwegian's leading airports, it reversed its market share gains of recent years in its home base of Oslo, where its share of traffic fell by 2ppts to 39% and its absolute number of passengers fell by 24,000 in 4Q2014. In other major Nordic airports, Norwegian increased passenger numbers, but saw little change in market share in 4Q2014. At Stockholm and Helsinki, its share was stable at 23% and 12% respectively and in Copenhagen it increased by just 1ppt to 17%.

The two big growth markets for the airline were its relatively new bases in Spain and London Gatwick. Passenger numbers at its six Spanish bases increased by 279,000, although its market share gained only 1ppt to 4% in 4Q2014. At Gatwick, passenger numbers were up by more than half a million and Norwegian's market share jumped from 7% in 4Q2013 to 13% in 4Q2014. Norwegian added long-haul destinations (New York, Fort Lauderdale and Los Angeles) to Gatwick, currently its only long-haul base outside Scandinavia during 2014 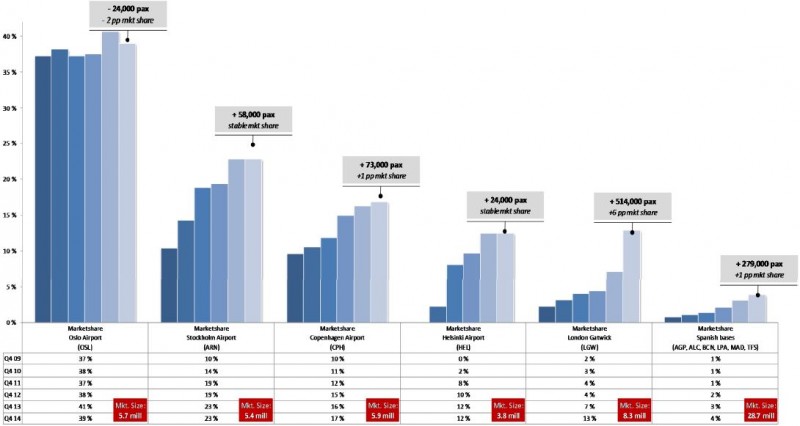 We cannot determine from the reported data whether there is underlying like for like RASK weakness in each geographic segment, but competitive dynamics suggest that it is likely to be weaker on international Europe routes than in the domestic market. New bases and routes in Spain and London have experienced yield pressure as they build up their traffic levels. 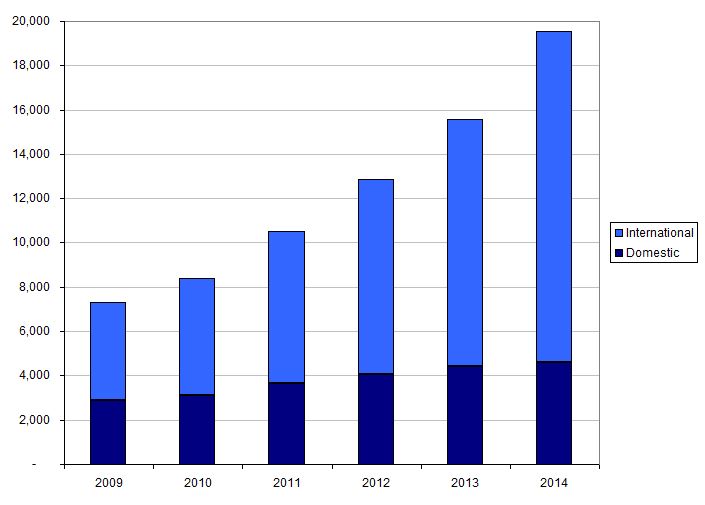 Norwegian's 2014 operating costs (excluding other gains and losses) increased by 35%, fractionally less than the growth in ASKs, but higher than the increase in revenue. Cost performance was adversely affected by the weakening of NOK versus USD through the year. Both fuel and ex fuel costs were up by 35%. Fuel costs grew at a similar rate to capacity growth, as lower fuel prices were offset by USD appreciation against NOK. Norwegian has now hedged 30% of its 2015 jet fuel anticipated consumption at an average price of USD815 per tonne.

Labour costs increased by 29%, more than the roughly 25% increase in average headcount. However, the year on year cost comparison was distorted by the reversal of a pension-related provision in 4Q2013. Without this, the annual increase in labour cost in 2014 was 21%, less than the increase in headcount and much less than ASK growth. Longer average sector lengths are positive for labour productivity measures.

CASK, or total operating cost per ASK (excluding other gains and losses) was just below flat (-0.4%) in 2014, a similar performance to ex fuel CASK. Cost was adversely affected by currency movements and by additional unexpected costs related to delays in the launch of long-haul operations (late 787 deliveries and delayed US permit approval).

Nevertheless, this CASK performance will need to improve, particularly given that CASK should automatically decrease as average sector length grows. Norwegian has a CASK target for 2014 between 5% and 7% lower than in 2014.

Our calculations show that Norwegian's RASK has fallen by 15% since 2012, the last year before it entered long-haul markets. As noted previously, RASK typically falls as average trip length increases, but so too should CASK.

In Norwegian's case, however, CASK fell by only 6% from 2012 to 2014. This failure to match the fall in RASK with a similar or greater cut in CASK has plunged the company into loss. 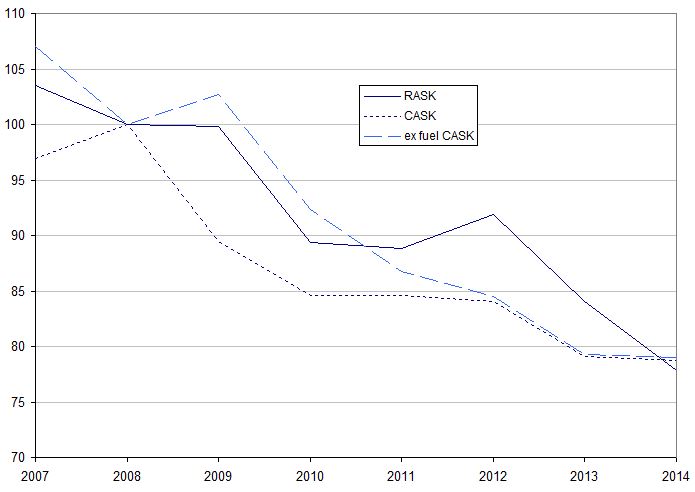 *cost per ASK, based on reported costs at the EBIT level, excluding other gains/(losses)
Source: CAPA – Centre for Aviation, Norwegian Air Shuttle 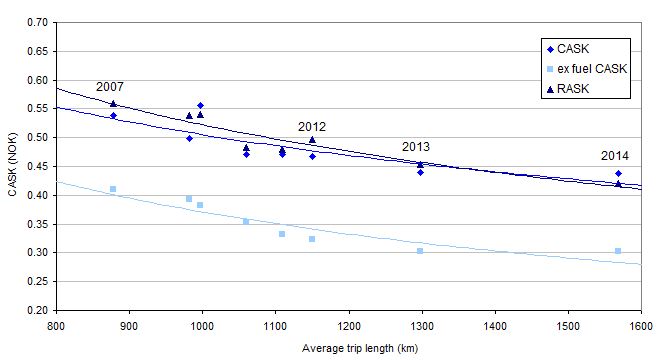 Norwegian's misfortune with unanticipated delays in its long-haul strategy have certainly hindered its CASK performance, but account for less than 2% of operating costs in each of 2013 and 2014. Currency movements have also hurt Norwegian's CASK performance, but all airlines need to face such challenges, not only through cost efficiency measures, but also through commercial initiatives on the revenue side.

Moreover, the weaker NOK versus international currencies should also be positive for RASK, at least on international routes, since internationally priced fares translate into more kroner.

Viewing RASK and CASK across the quarters of 2014, it managed to reduce the percentage decline in RASK as the year progressed. In 4Q2014, RASK was even level with the same quarter a year earlier, thanks to slower ASK growth (21% compared with 35% for FY2014), strong ancillary revenue performance and currency movements. The trouble was that CASK declines also narrowed through the year and turned to positive growth in 4Q2014 (partly due to currency movements).

2014 was a year that Norwegian's CEO Bjorn Kjos must be glad to put behind him. "There is no denying that 2014 has been a weak year", he said in the company's 4Q results statement. The outlook into 2015 contains a number of more positive factors.

Norwegian plans ASK growth of only 5% in 2015, much slower than in recent years. Much of this capacity increase will come from the long-haul network, rather than the short-haul. Moreover, the capacity plans of its main Nordic competitors in 2015 are also modest. SAS plans to cut ASKs by between 1% and 2%, while Finnair plans to grow by 3%.

This more cautious capacity growth should be positive for RASK, which should also benefit from the maturing of Norwegian's new bases and routes. RASK has fallen by 8% and 7% in each of the past two years and Norwegian will need to do better than this if it is to improve its profitability in 2015, given its in 2015 overall CASK reduction target of between 5% and 7% (based on current fuel prices and exchange rates).

Norwegian will be hoping for a definitive decision in 2015 regarding Norwegian Air International's US foreign carrier permit application, a factor that would be positive for labour productivity on its long-haul network. Lower fuel prices should certainly be positive for Norwegian for the 70% of its fuel needs that are not hedged and it expects as saving of NOK2 billion in 2015. However, its 2015 CASK target implies that ex fuel CASK will be little changed, in spite of what should be another increase in average trip length due to the increased mix of long-haul routes.

As Mr Kjos also said, "there is no doubt that we need to further reduce our cost level in order to stay competitive in a very challenging market".

In addition, in 2015, Norwegian must demonstrate that its global expansion will not be a permanent drain on its profitability. Now in its third financial year of long-haul operation, the time for excuses is over.