United’s plans to launch new flights from its Denver hub to Tokyo Narita Airport in Mar-2013 with its 219-seat Boeing 787 comes at fortuitous timing. While North Asia-North America traffic has been growing, primarily at the behest of Asian carriers, United is the best positioned of US carriers to take part in this growth since it achieves the highest trans-Pacific yields. Combined with anti-trust immunity with Japan's All Nippon Airways (ANA), which is already showing benefits, and United's market leading position in the US, United will be able to grow the market.

Yet trans-Pacific yields are the lowest international ones for United, as it is with other US carriers. The trans-Pacific market does not have the strong corporate and leisure base of Europe or the VFR traffic of Latin America. With yield growth being more limited, the 787 will help the bottom line with its step change in efficiency, reducing costs. United will certainly not be the last carrier to take advantage of changing competitive dynamics.

The route is also a boost for United's presence in Japan. Despite the merged United over-taking Delta Air Lines as the world's largest carrier, Delta still has a larger presence in Japan than United.

Delta is currently the fifth largest carrier in Japan by system seats and is the only non-North Asian carrier to rank in the top nine largest carriers serving the country. Looking only at international seats to/from Japan, Delta is the fourth largest carrier and United seventh. United has approximately half of Delta's capacity to Japan, although it has a wider reach elsewhere in Asia with 38% of its Asian capacity placed in Japan versus Delta's 78%, as United remarked during its 1Q2012 results briefing. 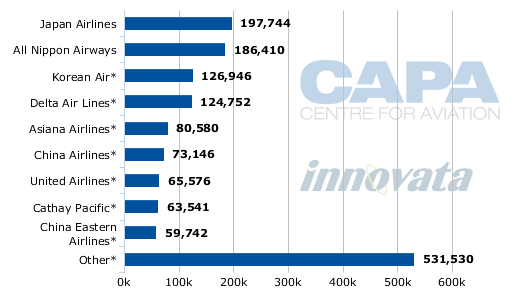 Long and thin route, but with network and costs benefits

The route also shows the 787's potential in opening up long, thin routes. Many such routes have already been announced for the US and Japan, with Japan Airlines (JAL) in Apr-2012 launching Tokyo-Boston service and planning for Tokyo-San Diego service while ANA plans to launch services from Tokyo to San Jose and Seattle, both which will eventually operate with the 787.

Boston-Narita has the longest distance of any of the announced US-Asia 787 routes at 6702 miles. The new point-to-point markets allow both ANA and JAL to expand their North American footprint by matching capacity more closely to demand in the thinner markets where they are deploying the aircraft.

While Delta's trans-Pacific yields outpaced those of pre-merger United for the first three quarters of 2011, the latest data available, the merged United-Continental entity has yields stronger than Delta's. (Continental and United reported operational details separately.) The yields do not separate traffic from Asia and Australia, but both Delta and United deploy a far majority of their trans-Pacific capacity to Asia. In a distant last place is American Airlines, whose reliance on the Japanese market hurt itself following the Mar-2011 earthquake and tsunami in Japan. Japan's rebound, as well as American's ATI with Japan Airlines, should see American's yields recover. 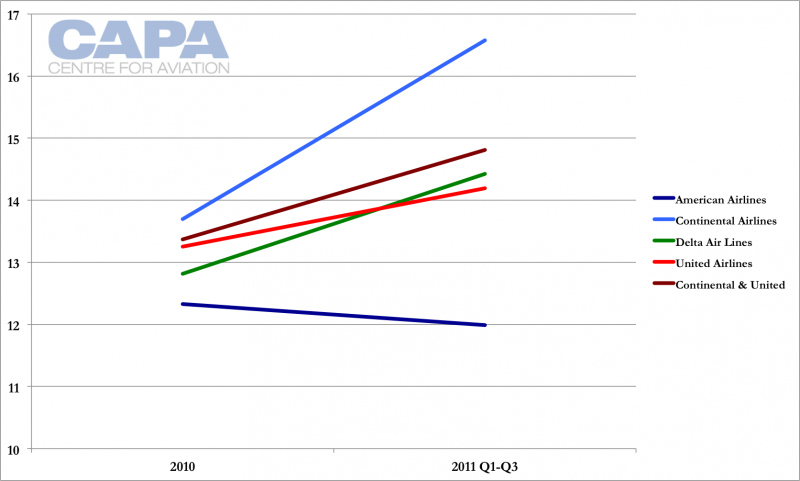 Source:CAPA – Centre for Aviation & US DoT

While United has strength across the Pacific relative to its peers, the trans-Pacific market has the weakest international yields for United, as is the case with American Airlines and pre-merger Continental. The situation is further exasperated by higher operating costs across the Pacific where fuel accounts for a larger portion of costs and fuel surcharges do not necessarily offer full recovery. 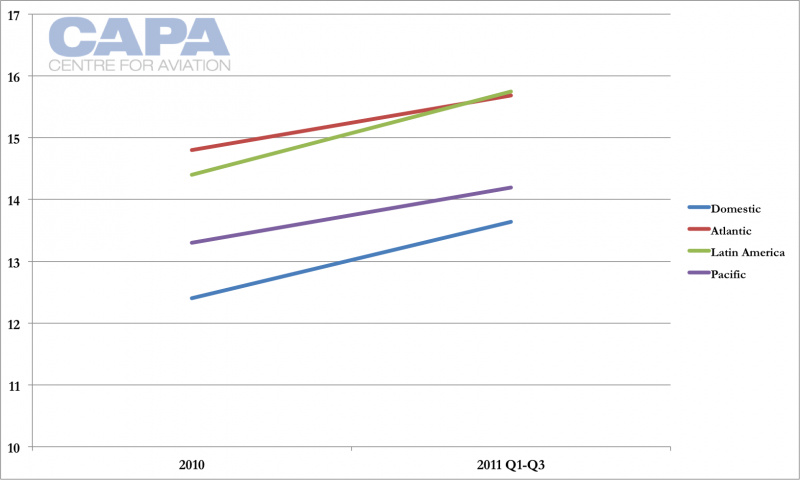 Opening a Denver-Tokyo route also gives United another connecting point for services to Tokyo and beyond, allowing it to reduce reliance on its other hubs, which in turn frees them to allow for high-yielding O&D traffic rather than have to accommodate lower-yielding connecting traffic. For example, in the Australian market, itineraries to the east coast of the US via Los Angeles/San Francisco can be only USD100-200 more than Australia-Los Angeles/San Francisco despite the additional West Coast-East Coast return flight, which could be sold on its own for USD300 or more. Domestic traffic boosts at Denver will be appreciated as United faces further competition in the Colorado city from Frontier and Southwest.

After Denver-Tokyo, United eyes 787 service to India and Australia/NZ

The Denver-Tokyo mission appears just the type of pairing the 787 was built for. At a distance of 5,787 miles, today the route would require a larger-gauge 777 to complete the mission. But the nature of the Tokyo-Denver market lends itself to a much smaller seating capacity, which has been one of the key selling points of the 787, despite the numerous delays that prolonged the aircraft's service-entry.

Earlier in May-2012 United CFO John Rainey touted the flexibility the 50 787s United has on order offered the carrier, especially in allowing the carrier greater flexibility in seasonal aircraft deployment, noting the 787 allows United to effectively manage capacity in counter-seasonal markets like the South Pacific. The 7650-8200nm range of the 787-8 allows carriers to fly similar distances to the 777, while having a seating capacity closer the 767, Mr Rainey said. United may be interested in deploying the 787 to Australia during the off-season, greatly improving its performance as currently United is largely restricted to operating 747-400s and consequently engages in significant fare stimulation.

Likewise United could deploy the 787 to India, a market with significantly less traffic in the Northern Summer and which experiences over-capacity. Like Denver-Tokyo, the 777-200s United uses to reach India are the lowest gauge aircraft it can deploy that are capable of reaching India non-stop. Deploying the 787 in off-peak periods will alleviate capacity problems, allowing United to potentially boost unit revenues. American Airlines found the over-capacity situation too great as it depressed yields and made its Chicago-Delhi service with 777-200s unprofitable.

The 787, despite the public interest in it, may ironically be featured on low-demand routes, but this of course is a reality of the air transport business.

Seasonal markets United could serve with its 787s: May-2012 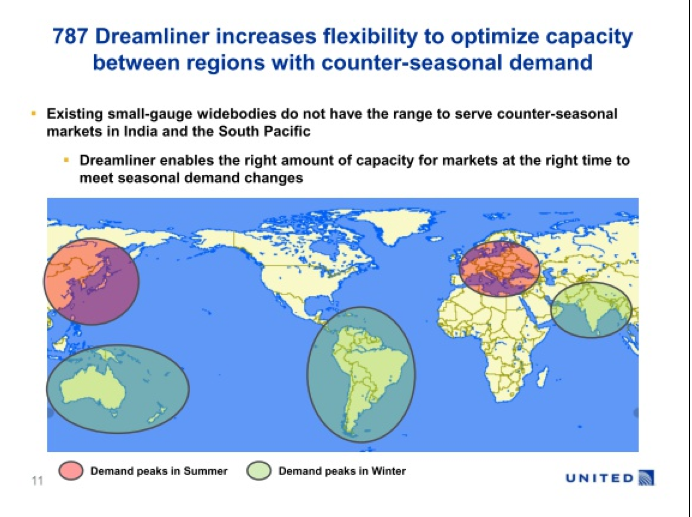 The 787s could also allow United to better manage capacity on its intra-Asia flights from its Tokyo Narita hub. The carrier has alternated using 777s and 747s in recent years on flights from Tokyo-Singapore and in the last year has even downgauged from 747s to 737s from Hong Kong to Ho Chi Minh and Singapore. The 787 offers a more optimally-sized aircraft for United’s intra-Asian flights without significant sacrifies on cargo, although United will have to weigh the benefit of using the 787 on shorter intra-Asian services as opposed to immediately turning the aircraft around for a long-haul flight where its economic advantages will be felt more.

United is due to take delivery of five 787s this year but has not specified delivery dates as it awaits a firm schedule from Boeing. Programme delays forced United to delay inaugurating its first announced 787 route, Houston-Auckland, which was announced by merger partner Continental in 2010. United is holding the route launch hostage to Houston not permitting international services from Houston Hobby, which Southwest is lobbying for as it has a significant operation at Hobby but no flights at United's hub at Houston Intercontinental.

A United spokesperson told the Associated Press that United planned to launch the Auckland route on the assumption Intercontinental would serve as the city’s sole international airport, which would help maximise connecting traffic. “If that isn’t the case, the flight won’t work,” the spokesperson said.

The situation is more complex than that, however. It would not be in United's interest to see its competitor operate international services from Hobby, which would offer lower costs than Intercontinental and allow Southwest to maintain its domestic feed at Hobby. If Southwest operated international services from Intercontinental, it would need domestic feed and would have to partially replicate its Hobby network – a prohibitive endeavour. Southwest argues allowing international flights from Hobby will benefit the region while United counter-argues that is not the case at all.

Further, whether or not Southwest can operate international routes has no bearing on United's connecting traffic, despite the United spokesperson's claims otherwise. While United may be using the route as a political ploy, there is also a chance post-merger United has fallen out of favour with the service.

When Houston-Auckland was announced, Continental had no service to the Pacific region from the continental US. The Australian market was experiencing enough capacity growth and an Auckland route from the west coast of the US would have competed with Air New Zealand's services, and possibly risk ANZ's willingness to give United favorable access to onward flights from Auckland.

United in the past has operated services to Auckland from the west coast of the US and may consider that option to be more viable as west coast hubs allow United to pull traffic from across the US whereas the Houston-Auckland service would involve circuitous journeys for those west of Houston. (While Qantas has a Sydney-Dallas service, it also has services to Los Angeles and so preservers convenient connections across the west coast. Qantas partner American also has a smaller presence in Los Angeles than United does in Los Angeles and San Francisco, necessitating Qantas access American's larger hub in Dallas.)

Denver for years has been lobbying for years for a direct connection to Asia. Cananda, Mexico and Europe now account for the aiport's main international markets. United CEO Jeff Smisek boasts the carrier’s new daily service Tokyo would generate more than USD130 million in economic benefit for the state of Colorado. 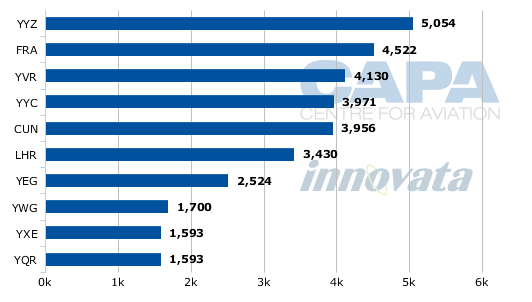