Major component and aerospace manufacturers were down in trading at the beginning of the week, with aircraft manufacturers Boeing and EADS dropping 0.3% and 2.1% respectively, while Rolls-Royce (-1.1%) and MTU Aero Engines (-2.6%) also suffering. Embraer proved the exception, up 0.6% at the close of trading on Monday.

Boeing had its outlook cut from ‘overweight’ to ‘equal weight’ by Barclays Capital yesterday. Its target price was cut from USD60 to USD46 per share. Boeing’s shares closed on Monday at USD42.24.

Barclays expects significant financial overruns from the latest series of delays to the B787 programme. Boeing is “as yet unable to assess either schedule or financial impact” of the delays, but will have to account for the costs of pre-production, implementing the technical fixes to prototype aircraft and into the production line, more penalties to airlines and supplier claims. However, Barclays also foresees that the aircraft could be the most profitable aircraft Boeing has ever had, once it is in full rate production, of around 120 aircraft p/a by 2013.

Aircraft lessors again traded generally stronger, with Babcock & Brown Air the best up 2.6%. However, the market is looking anxiously at the proposed sale of CIT Group’s leasing unit, CIT Aerospace. There are reports emerging that it may be sold at a “distressed price”, as CIT Group tries to stave off a collapse by selling assets, after the US Government refused to support a bail-out for the company. CIT Aerospace leases more than 300 aircraft to 100 different commercial carriers.

The unit’s potential sale price has not been helped by the current level of bidding for International Lease Finance Corp (ILFC), the world’s largest aircraft lessor, which is being sold off by AIG. Bids received for ILFC have reportedly been well below its USD7.8 billion market value, as the lessor struggles with high debt levels and a large degree of uncertainty. 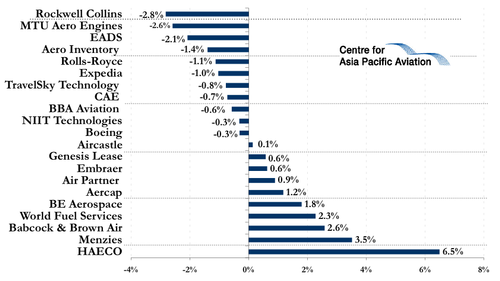