Mitsubishi is confident its new Mitsubishi Regional Jet will find strong support in Europe and North America. The manufacturer expects to sell 1,000 MRJs over the next 20 years, and 30% of those are expected to go to European carriers and 40% to North American customers. Asia Pacific orders are expected to account for just 20% of production.

Airlines are expected to be attracted to larger, more efficient regional jets, allowing them the flexibility to connect more city pairs. Mitsubishi plans to open a regional sales office for the MRJ in Europe, potentially as early as 2010.

Mitsubishi has also confirmed it is considering a 100-seat version of the aircraft to win European customers. There are two basic versions planned, the 70-80 seat MRJ 70 and the 80-96 seat MR 90.

Initial orders for the MRJ have been limited. Fifty aircraft have been ordered by Trans State Airlines, which operates regional feeder services on behalf of United Airlines and US Airways, and 15 aircraft ordered by All Nippon Airways. There are a further 65 options that could be exercised for the aircraft.

Construction of the MRJ is due to commence this year, with first deliveries due in 2014.

In trading on Tuesday, regional jet manufacturers Embraer and Bombardier were down sharply, in line with a general fall in markets on global growth concerns. Bombardier dropped 5%, while Embraer was down 4.7%. EADS dropped 3.4%, while Boeing tumbled 6.3%. 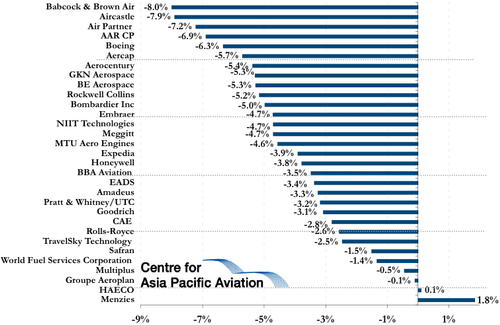