Mexico’s publicly traded airlines are seeing signs of a gradual recovery in the country’s fragile economy, which is fuelling hope that their fortunes will improve in CY2015 after battling weak domestic demand in CY2014.

As a result of sagging domestic yields, both Aeromexico and Volaris have attempted to push the bulk of their capacity into international markets, with varying outcomes as the introduction of five Boeing 787s has continued to pressure Aeromexico's yields in the short term. Volaris’ recent transborder push does appear to be mitigating some of Mexico’s domestic weakness.

Both airlines were profitable in 3Q2014; but Aeromexico’s profits declined while Volaris increased its net income by shoring non-ticket revenue and opting to trade in load factor to boost yields. 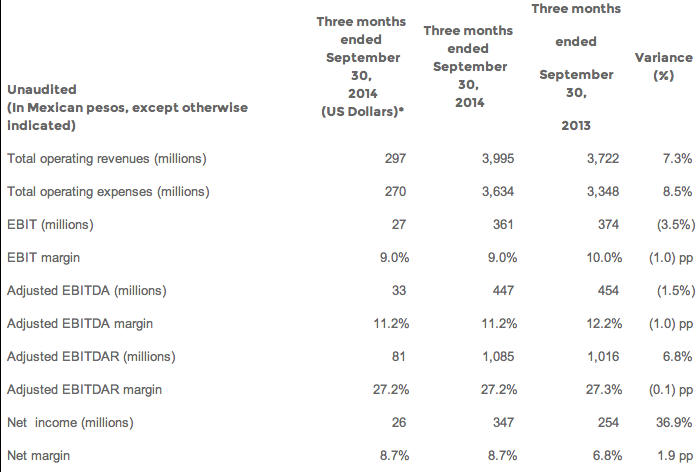 “We consider that in a sluggish economic growth environment and challenging fare market like the one we experienced year-to-date, managing our third quarter load factor to benefit the yield recovery was absolutely important to drive profitability,” he stated.

Aeromexico debuted Contigo in Oct-2013 as a lower fare offering in certain transborder routes from Tijuana and Guadalajara, and from those cities to Culiacan.

In 4Q2013 Volaris estimated that fares in some markets from Guadalajara and Tijuana fell between 30% and 40%, and Volaris opted to shift capacity in Tijuana to markets where it faced less competitive pressure – Cancun, Chihuahua, Tuxtla Gutierrez and Veracruz.

Volaris’ available seat miles (ASMs) increased 6.5% in 3Q2014, of which 17.6% was deployed into US transborder markets. Volaris in Jul-2014 launched service from Guadalajara and Chihuahua to Denver, and introduced new flights from Guadalajara to Portland in Oct-2014.

Presently, international routes account for roughly 26% of Volaris’ ASMs as the airline believes yields are robust in international markets. Volaris is planning to introduce new service to Reno, Nevada, from Guadalajara in Dec-2014.

During the same month, Volaris is also launching new flights from Guadalajara and Mexico City to Fort Lauderdale. 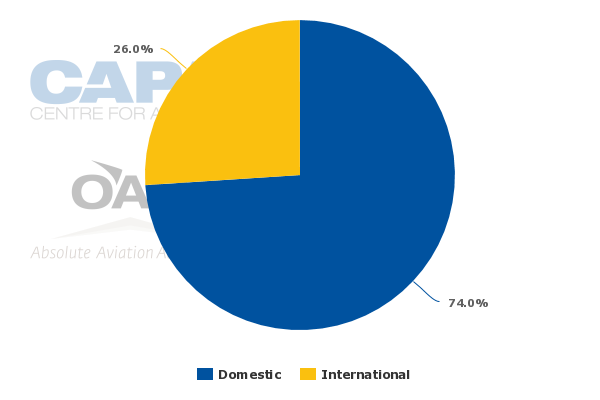 Another important issue in Volaris’ 3Q2014 profitability was non-ticket revenue, which on a per passenger basis grew 44% year-on-year to USD21. The robust non-ticket sales helped drive Volaris’ total unit revenues up 1% in 3Q2014, while passenger unit revenues declined by 5.2%.

In late 2013 after moving to a new reservations system Volaris introduced carry-on baggage fees and began selling various items on board. Airline chief commercial officer Holger Blakenstein remarked that Volaris’ strong performance in non-ticket revenue during 3Q2014 was a good uptick in the high travel season for the airline’s onboard retail sales. Mr Blakenstein also explained that during the quarter Volaris “also optimised pricing of selected products for the high season and low season, time of day and type of route”. 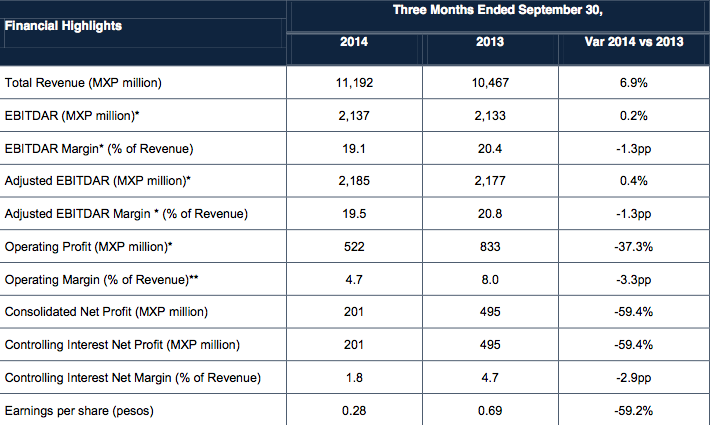 During most of CY2014 Aeromexico has opted to trade yields in for load factor to preserve its leading market share position within Mexico. Its yields fell 5.8% in 3Q2014 while load factor grew 1.6ppt to 81.9%. The decline in yields at Aeromexico also slowed during 3Q2014 after falling 12.8% year-on-year during 1H2014.

The airline estimates that its domestic market share for the first eight months of 2014 was approximately 36%. 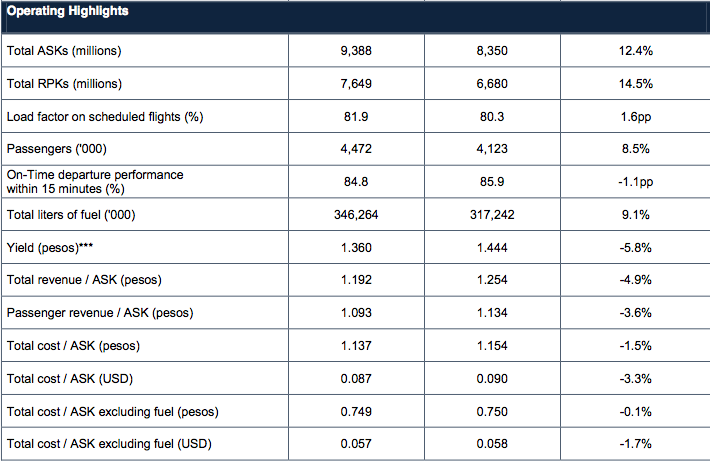 Aeromexico has added five Boeing 787-8 widebody aircraft to its fleet during the past year, which have also contributed to its decline in yields. The airline estimates that the 787s have 42% more seats than the 767-200s they are replacing, which is creating some short term yield pressure. But the company’s management recently stated that yields on 787 routes have been improving, and the additional capacity is starting to be absorbed. During 3Q2014, international flights represented 52% of Aeromexico’s total passenger revenue and domestic operations represented the remaining 48%.

Both Aeromexico and Volaris are seeing some positive improvement in the Mexican economy. Aeromexico remarked that Mexico’s general economic indicator grew 2.2% in the Jun-2014 to Aug-2014 time period, compared with a 1.5% rise from Jan-2014 to May-2014.

Using data from the Mexican government, Aeromexico stated that passenger traffic growth in the Mexican domestic market is slowing. From Jun-2014 to Aug-2014 passengers travelling on domestic routes increased 5%, and 7.9% from Jan-2014 to Aug-2014. Since the demise of Mexicana in 2010, the Mexican domestic market has regularly been growing at a double-digit clip. “This slowdown in the passenger traffic growth reflects a more rational capacity growth in the industry,” Aeromexico concluded.

Aeromexico and Volaris appear to continue to focus on international markets

Aeromexico believes there will be some pick-up in Mexican economic activity in CY2015 as GDP is projected at 3% to 3.5% versus 2% to 2.5% growth in CY2014. The airline aims to keep its domestic supply growth in check during CY2015 after recording total ASK growth of 12% in CY2014, which is at the lower end of its initial guidance. It projects 5% to 6% capacity growth in 4Q2014, all geared towards international markets.

As it starts to see some signs of economic recovery, Volaris is planning 10% to 12% capacity growth in CY2015, some of which is driven by the delivery of two 218-seat Airbus A321s in 2Q2015 and the completion of reconfigurations to 24 A320s with five additional seats for a total of 179. The airline has not indicated how much of its capacity will be deployed into international markets, but given the performance of those markets it is likely a good portion of Volaris’ CY2015 supply should be allotted to transborder routes.

Mexico and its airlines face a long road to economic recovery

Both Aeromexico and Volaris are working under the assumption that Mexico’s economic recovery is in its infancy.

After more than a year of battling weak pricing traction in the domestic market, both airlines are seeing some improvement in their performance, but each company still faces an uphill climb in overcoming the challenges in Mexico’s domestic market.

Rational capacity growth is key for the full recovery of Mexico’s domestic market. The country’s low-cost airlines have grown rapidly during the past few years, and were basing their future growth on traffic stimulation in Mexico’s still under-developed domestic market.

But for the short term those airlines will need to temper their expectations in order to remain viable to reap the benefits of Mexico’s full economic recovery.