Mexicana de Aviacion: A turbulent life. Is this the end of the road?

“Reservation and issuing of tickets for flights operated by Mexicana Airlines (CMA) have been suspended indefinitely. However, Mexicana Airlines (CMA) will continue flying in the interest of protecting passengers who already have tickets and flight itineraries.” The announcement appeared on the airline’s website at 1800h on 04-Aug-2010. On 02-Aug-2010, management had filed for Mexico’s equivalent of Chapter 11 bankruptcy protection and for Chapter 15 protection from seizure of its assets in the US, after failing to persuade unions to reduce staff and salaries. The airline is now struggling to maintain service and appears to be in its death throes.

The long, not always happy life of Mexicana

This unhappy epitaph comes to an airline which was just a few weeks past its 89th birthday, having started operations in Jul-1921; the Mexicana de Aviacion brand was formally established three years later.

The flag carrier has lived in a highly competitive marketplace for all of its existence, flirting with bankruptcy in the 1960s, but narrowly escaping. It has enjoyed a turbulent life, in which the airline was briefly nationalised in the 1990s, merged with Aeromexico and de-merged, privatised, joined and left the Star Alliance and joined oneworld last year.

Grupo Posadas, a large hotel group, bought the airline in an open bidding process in 2005 and has subsequently sold down substantial parts of its holdings. As a privately held company, Mexicana is not rich with information, but a proposed USD250 bond raising (to enhance the carrier’s balance sheet) was dropped in Jun-2010. An IPO had also been on the books for 2011.

While Mexicana awaits formal court protection, and "in order for CMA to continue operations and to protect the company, passengers and its creditors, a series of temporary injunction relief measures have been granted to prevent creditors from exercising their rights over the CMA’s outstanding debt obligations. Such measures are subject to negotiations with CMA’s creditors and unions." This was the airline’s position last week, but things have moved quickly since then.

Pilots and flight attendants being asked for deep cuts

The changes being sought of staff are more than incremental – 40% salary cuts for pilots and flight attendants, as well as a 40% reduction in their numbers. To date, this has not been acceptable.

A bargain at one peso?

One alternative being offered by the airline’s shareholders was a buyout by staff for one peso. That apparently good deal must be measured against the USD1 billion in debt that the airline is carrying. Partly a measure to introduce flight crew to the reality of the situation, this offer is unlikely to be accepted, leaving Mexicana to find its own way through a difficult bankruptcy process.

The end is nigh, apparently. MexicanaClick and Link also at risk

The unlikely scenario, where the airline continues to operate, but without selling tickets, was always going to be fragile. So it is not surprising that in just the past few hours, the airline has announced the cancellation of a number of longer haul flights and “that its financial situation has deteriorated substantially in the last week due to a series of events that have strangled the cash flows the airline needs to finance its day-to-day operations. One such event was IATA’s decision to suspend the carrier’s BSP sales channel, forcing it to suspend the sale and issuing of tickets indefinitely.”

This also has had “serious repercussions for MexicanaClick and MexicanaLink sales. Other sources of revenue have either dried up or are being retained by financial institutions following the company’s recent decision to file bankruptcy proceedings.

“Consequently,” reads the announcement, “Mexicana Airlines will be forced to cancel certain flights over coming days to optimize available resources and ensure that priority is given to homebound passengers.”

Once an airline ceases operations, recovery is rarely possible. A broadly similar situation was reached with Alitalia in 2008, and the airline did recover, thanks partly to foreign airline interest in acquiring a share in it – but predominantly because Prime Minister Berlusconi put the full force of the government behind efforts to retrieve the situation. In the case of Mexican however, the Mexican government has been explicit: it will not assist in any bailout.

There may be some interest from other oneworld alliance partners, or even from chief full service competitor, Aeromexico, but no white knight has made an appearance yet. Nor is there any obvious partner which would be willing to absorb the host of legacy issues that come with Mexicana.

So this latest news, of cancellations and the apparent drying up of the carrier’s access to cash, means that if Mexicana has not actually gone over the brink, it is teetering.

For most of the current year Mexicana has been seeking hurriedly to reduce costs, as the combination of uncertain times and stiff competition from Mexican and US airlines vividly exposed its weaknesses. But the owners had previously tried to keep both MexicanaClick and MexicanaLink, the carrier’s independent low cost regional operations, separate from the crisis. The latest announcement would appear to make that prospect unlikely too.

Flow on impacts – for Airbus, airport operators, one world and Aeromexico

Mexicana took delivery of its most recent A319 in Jun-2010, from ILFC. The carrier has only three more aircraft on order, two A319s and an A320, but the almost inevitable downsizing which would follow a potential recovery from bankruptcy protection, implies an airline some 40% smaller.

The US filing for Chapter 15 protection from creditors is to protect the airline from entities such as lessors or airport operators, from seizing aircraft to secure their debts. Three aircraft have already reportedly been seized by lessors. As the carrier plans to keep operating – and presumably recommencing to sell tickets once the situation stabilises – keeping its assets free to operate is a key consideration.

In its Chapter 15 filing, Mexicana last week asserted that "The seizure of even one aircraft, for example, could disrupt Mexicana's global operations and potentially trigger or encourage the subsequent exercise of remedies by other parties.”

Airbus the backbone of the fleet

A substantial downgrading of Mexicana’s services, as now seems likely, will most likely require substantial fleet reduction. With an average age of over 11 years, several of these aircraft will be becoming elderly, so not all will be easy to reposition.

Likewise, a downgrading or even closure of Mexicana will have some flow on to the main airports where it operates.

Most of the country’s airports are run by private operators. These include:

Mexicana and its regional subsidiaries are sizeable operators at most of these airports. So the pain will be spread widely at first. But many of the domestic operations at least would probably lend themselves to being picked up by an opportunist investor. 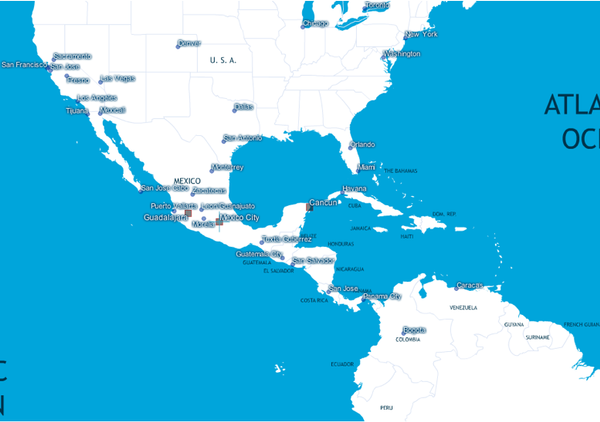 The same applies to many of the airline’s north American routes into Canada and the US. There will be several LCCs and others willing and eager to mop up any unmet demand that may occur as Mexicana contracts or disappears.

oneworld to lose a valuable partner

Even if Mexicana is able to extricate itself from this difficult condition, it will certainly emerge much weaker. Gaining Mexicana was something of a coup, after the carrier had quickly exited Star a year or so earlier – and prevented Sky Team from getting a look in. Nonetheless oneworld remains strong; although American Airlines is a major operator into Latin America, most of its activity is through its Miami hub.

An opportunity for Aeromexico

One point of comfort for all stakeholders may arise from a finding in May-2010 by Mexico’s Federal Competition Commission that a merger between Mexicana and Aeromexico would not substantially reduce competition and would therefore be permissible.

If in fact Mexicana were now to be reduced to a pile of assets rather than a going concern, this would offer a substantial opportunity for Aeromexico – and with no obstruction likely to be in its way.

A notable event and, in many ways to be mourned

But, for more than aviation historians, the passing of a famous old name like Mexicana would be an event not to be celebrated. There are too many octogenarian – and older – airlines flying today, baggage and all, to allow the industry yet to be productive.

Nonetheless, the loss of Mexico’s and north America’s first airline is a less than joyous event and will/would create some large holes that are not quickly mended. It is important in particular that the less attractive domestic regional routes be quickly picked up, at risk of losing valuable community and economic links. The more popular routes to north American holiday destinations and to Mexico City will soon be compensated for.

It may be a little too soon to say Vale Mexicana, but the Reaper is just around the corner.