Passenger traffic at Australia’s major airports is cooling rapidly as economic activity tapers off. The resources boom states of Western Australia and Queensland had strong momentum entering this downturn, and this is reflected in latest traffic data.

Perth’s international throughput was up 1.1% in the first quarter, to 658,969 passengers, but the March numbers entered negative territory, falling 2.9% year-on-year to 204,963.

Still, it was better than Sydney Airport, which had an 8.7% reduction in international passenger numbers last month, reflecting the slump in demand experienced by Qantas and other major carriers.

Sydney’s domestic throughput also fell, by 3.5%, last month. Major shareholder, Macquarie Airports (MAp), stated traffic was affected by the timing of Easter, but added it was “pleased” Tiger Airways is planning to start serving the airport (from Melbourne) from July. MAp’s shares fell 2.7% yesterday and are down a further 2.5% in morning trade today.

In the first three months of 2009, Sydney Airport’s international and domestic passenger numbers were down 2.6% and 7.1%, respectively.

Over the same period, Melbourne Airport has experienced no change in international traffic and a 3% reduction in domestic throughput.

Melbourne Airport handled 4.9 million domestic passengers in the first three months of 2009 - just 482,000 fewer than Sydney. With a broader cross-section of LCC routes, it would not be surprising if Melbourne made further inroads into Sydney’s leadership over the remainder of 2009.

Melbourne Airport’s international prospects are also reasonably solid. CEO, Chris Woodruff, stated, “new airlines such as AirAsia X and Etihad Airways combined with increased services from existing carriers such as Emirates and Pacific Blue are giving visitors and Victorians more direct routes than ever before”.

The new capacity is however driving down fares significantly, raising pressure on incumbent airlines.

Melbourne Airport’s international terminal expansion continues on schedule and when completed in 2011, T2 will double in size.

Shares in Australian Infrastructure Fund, with an exposure to Melbourne and Perth airports, fell 2.9% yesterday and are down 2.7% in early trade today. 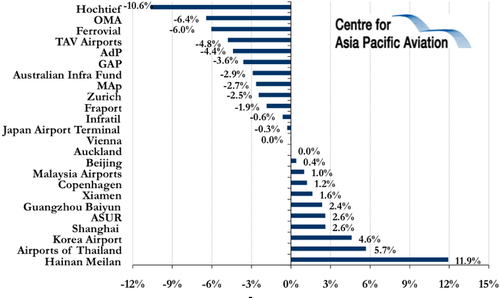