IATA, in its July-August Airlines Financial Monitor, commented that “markets are positive on Asian and US airlines but European airline share prices are lagging”.

Meanwhile, shares in Japanese LCC, Skymark Airlines, slipped 4.7%, after considerable recent share price gains for the LCC. For example, the carrier’s share price increased 9.6% on Friday, preceded by 8.8% growth last Thursday. Skymark is now the only airline other than ANA to be listed on the Tokyo Stock Exchange now that JAL is no longer listed.

The carrier has also performed strongly financially, with a first quarter revenue increase of 19% and full year net profit forecast at USD29 million, with this result partly reflecting the achievement in efficiencies from its fleet restructuring.

The carrier will also benefit from Haneda’s expansion, which give the carrier additional domestic frequencies (eight slots), with the carrier also gaining from JAL’s withdrawal on some domestic routes. For example, Skymark will increase its network with the addition of five new routes out of Kobe airport later this year. The carrier’s crew shortage problems have also now been resolved, with Skymark now recruiting ex-JAL pilots.

The carrier, meanwhile, yesterday announced that the absorption of Shanghai Airlines Co Ltd through a share exchange has been approved by China Securities Regulatory Commission. 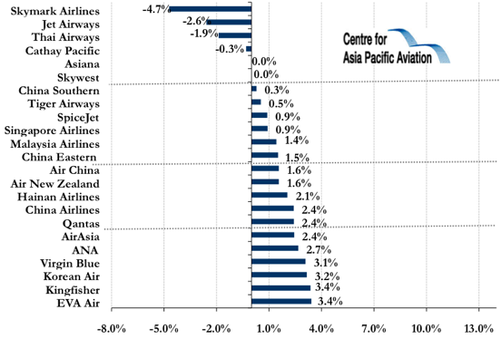