Maldivian is planning to further expand its fledgling international network, with a focus on China, as the carrier adds a second A320 family aircraft and potentially an A330. The expansion could lead to the government-owned carrier competing with privately-owned MEGA Maldives, which operates an expanding fleet of 757s and 767s, as well as several foreign airlines.

Maldivian was predominantly a domestic carrier and only operated one short-haul route to southern India until it added its first jet, an A320, in late 2012. It currently serves nine domestic and four international destinations, including one in China and three in South Asia.

Maldivian continues to expand domestically as it acquires more Bombardier Dash 8 turboprops and adds a new seaplane fleet. But more controversially it is pursuing expansion in the international market, starting with a second Chinese destination.

Maldivian seeks to lease A321 followed potentially by A330

Maldivian tells CAPA that the carrier is now looking at acquiring an A330 as its third jet aircraft. The A330 would open up opportunities for new routes, including northern China. A formal request for proposals for an A330 could be issued later this year.

Maldivian aims to start operating the A321 in Jul-2014 and lease the aircraft for an initial term of five to seven years. The carrier plans to configure its A321 with 185 seats, including 169 in economy and 16 in business. It is only considering aircraft that are less than 10 years old and prefers aircraft that are ETOPS certified with drop down in-flight entertainment monitors already installed.

The carrier’s existing A320, which is powered by CFM56 engines, is in two-class configuration with 138 economy and 14 business class seats. The A320 was manufactured in 2004, was formerly operated by Iberia and was delivered to Maldivian in Oct-2012, according to the CAPA Fleet Database.

International operations began in Jan-2008 with service on the Male-Trivandrum route. In late 2012, after taking delivery of the A320, Maldivian began serving Chennai and Dhaka. In 2013 the A320 was used to launch services to Chongqing in China and Almaty in Kazakhstan in July, followed by the launch of services to Colombo in Sri Lanka in August. The Hanimaadho-Trivandrum route was also launched in 2013 but using Dash 8s.

While Almaty and Colombo are no longer served Maldivian is increasing its focus on China. The carrier says it plans to launch services to Wuhan in Jun-2014 initially with one weeky flight. Also in Jun-2014 Maldivian plans to add a second weekly frequency to Chongqing.

Maldivian is looking at further expanding its network in mainland China in 2H2014 using the A321. The potential A330 would be used to launch services to northern China, which is not within range of the A320. Beijing is Maldivian’s most likely initial A330 route.

China represents a logical target market for Maldivian as it is the largest and fastest-growing source market for the Maldives tourist sector. As CAPA reported in the first instalment in this two-part series of analysis reports on the Maldivian market, tourist arrivals from China including Hong Kong have increased more than five-fold over the last four years from about 60,000 in 2009 to 332,000 in 2013.  Chinese arrivals were up 45% in 2013 and a further 21% in the first two months of 2014.

Maldivian will face significant competition as expansion in China is pursued

MEGA Maldives, which launched services in early 2011 and currently serves Beijing, Hong Kong and Shanghai, currently has about a third of the Maldives-greater China market. Chinese and Hong Kong-based carriers account for roughly another third. Other Asian carriers account for the remaining third, primarily Singapore Airlines (SIA) and SriLankan Airlines.

MEGA and Hainan Airlines are currently the only non-stop operators on the Male-Beijing route. But a one-stop product is offered by several carriers including Cathay Pacific and Hong Kong Airlines via Hong Kong, China Southern via Guangzhou, Sichuan Airlines via Chengdu, SIA via Singapore, SriLankan Airlines via Colombo and Malaysia Airlines via Kuala Lumpur. (China Eastern offers a two-stop product as it serves Male from Kunming with a stop in Colombo.)

Chongqing and Wuhan are among several secondary Chinese cities with relatively large demand for services to Male but with large seasonal fluctuations. MEGA served Chongqing with seasonal low frequency charter flights until 2013. Narrowbody aircraft could potentially be a better fit for services to secondary Chinese cities. But payload limitations are necessary on several routes, making one-stop connecting products from hub carriers more economic, particularly given the large seasonal fluctuations on most routes. Male-Chongqing is about 4300km while Male-Wuhan is about 5000km, close to the range limit of the A320 and A321.

All the mainland Chinese and Hong Kong carriers serving Male offer connections throughout China. SIA also is able to offer connections to some secondary Chinese destinations using its full-service regional subsidiary SilkAir. A smaller number of city pairs between Male and secondary cities in China are also available on MAS and Tigerair.

The launch and expansion of services to China represents a significant strategic change for Maldivian, which has always focused on the domestic and regional international markets. As China is already well served by privately-owned MEGA and foreign carriers, the expansion of Maldivian into China is also controversial. Given that Maldivian has government backing, private carriers prefer to see Maldivian focus on the domestic market and develop niche regional routes which are un-served or under-served.

Expanding into widebody aircraft and long-haul operations is a particularly risky proposition that the government will need to finance as Maldivian’s cost base will increase significantly. While the government is keen to develop new source markets and promote further expansion of the existing large source markets this can also be pursued by incentivising more air service from private and foreign carriers.

Maldivian has an important domestic mission as the government tries to boost connectivity within the country by opening more airports. Maldivian now serves nine airports in the Maldives, including one which opened in 2013, and plans to add another domestic airport after it opens later this year.

Maldivian is the main domestic player in the Maldives

As Maldivian is the only carrier on most of its domestic routes it has a crucial role in the Maldivian community. Maldivian also provides an important role in providing access to resorts for tourists arriving in Male.

As the main domestic carrier, there is a need for Maldivian and the seaplane operators to partner with MEGA and the foreign carriers serving Male. Maldivian’s expansion in the international market could make such partnerships more complicated.

Maldivian is also preparing to launch a seaplane operation in 2Q2014 using an initial fleet of two De Havilland Dash 6-300 Twin Otter aircraft. This move is similarly controversial as there is already a private company in the Maldives operating seaplanes. While about half of tourists arriving in Male still use seaplanes to access their resort islands, the reliance on seaplanes is being reduced as more domestic airports open.

More domestic - and international airports - open throughout the Maldives

Traditionally Male to Gan has been the main domestic route as Gan is in the far south of the country and about 500km from Male, putting it out of the range of seaplanes. From the Gan airport tourists are able to take boats to resort islands in the country’s southern atolls.

Currently Maldivian operates the only international route at Hanimaadhoo, to Trivandrum, which is a popular destination for Maldivians for education and medical treatment given its proximity to the Maldives. Hanimaadhoo and Trivandrum are only about 450km apart. Hanimaadhoo is further from Gan, about 800km, and is about 300km from Male.

Maamigili, which is located in central Maldives only about 100km southwest of Male, is currently only served from Male by Flyme, a privately-owned domestic carrier operating ATR 42s. Flyme launched operations in 2011 and currently operates a fleet of two ATR 42s from Male to Maamigili, Gan, Fuvahmulak and Dharavandhoo.

The other five airports in the Maldives are currently only served by Maldivian. As a result, Maldivian clearly has an important social role in providing connectivity for locals and tourists.

Maldivian’s role in providing regional international connections also has social and economic benefit, particularly its services to nearby India. Given the very small population and isolated location of the Maldives, southern India offers a wide array of important services for Maldivians including advanced medical facilities and universities.

While Air India also serves the Male-Trivandrum route, Maldivian is the only carrier operating from Male to Chennai and Hanimaadhoo to Trivandrum. Maldivian is the market leader between the Maldives and India, accounting for approximately half of total seat capacity. 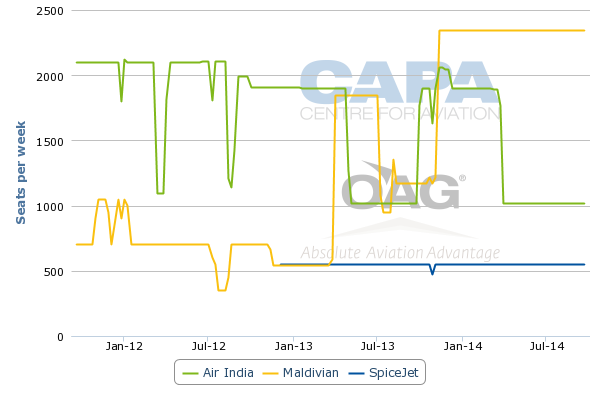 Dhaka is a very small market from the Maldives and is served as Maldivian was able to secure fifth freedom rights allowing it to pick up passengers between Chennai and Dhaka. 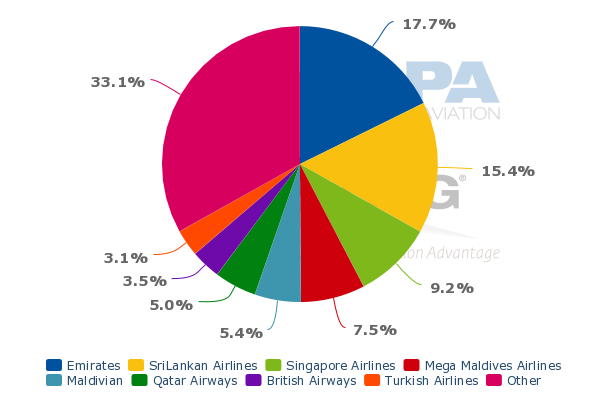 China has been pursued by Maldivian partially because there is insufficient demand on regional routes and the carrier needed to increase utilisation of its initial A320. China is also certainly needed to fill up the second A320 family aircraft. With just one A320 Maldivian has been in an awkward position as it is hard to maintain reliable service or achieve even limited scale with a single narrowbody jet.

But Maldivian could instead have decided to revert back to an all-turboprop fleet as the Dash 8 has the range for Trivandrum and other potential destinations in southern India. Kochi, for example, is currently linked with Male by Indian LCC SpiceJet using Dash 8 Q400s.

Upgrading to the 70-seat Dash 8 Q400 would be an option for Maldivian’s short-haul international routes as well as adding capacity in some domestic markets. The carrier has been expanding its turboprop fleet, taking delivery of its fourth Q300 in Oct-2013. It is also up-gauging as it is now looking to acquire a fifth Q300 while seeking to sell one Q200.

Maldivian has an opportunity to further expand its turboprop operation as more airports in the Maldives open, giving new options for tourists as the Maldives tourism sector continues to grow rapidly. But its expansion into markets outside South Asia with A320s and potentially A330s comes with risk and controversy.