Europe’s two largest LCCs have both stated they are considering adding capacity in Central Europe to capitalise on the collapse of SkyEurope, with easyJet forecasting an increase in passenger loads on its local operations due to the carrier’s demise and Ryanair stating it will look at the “gaps” opened up by the departure.

Shares in Ryanair and easyJet were both weaker yesterday, down 0.5% and 0.7%, respectively.

Wizz Air has already announced plans to add services from Prague and is looking at expanding in Slovakia and commencing services from Vienna.

In the US, non-listed Frontier Airlines Holdings stated its Plan of Reorganisation has been approved by the necessary majority of creditors, with 92.58% of the voting creditors approving the plan.

According to Frontier President and CEO, Sean Menke, “we have been able to completely restructure our business and reduce our costs to among the lowest in the industry. We have also developed alternative revenue streams through our branded AirFairs program, the introduction of ancillary revenues and the expansion of our network. We were able to do all of this in a cooperative manner with the constituents in our bankruptcy case, and we expect that to continue as we enter the final stage of our bankruptcy proceedings.” Frontier’s Confirmation Hearing is scheduled for 10-Sep-2009.

In South Africa, Comair, the operator of Kulula.com, stated it expects to report improved earnings when it releases its FY2009 financial results on 15-Sep-2009. The carrier is expecting headline earnings per share to increase by 25-30% in the year, marking an improvement of 15-20% from 2008 levels.

Virgin Blue's shares fell 2.7% yesterday, but have gained in early morning trading, as the carrier stated it has raised AUD98.3 million through the retail component of its new share issue, enabling the carrier to be “better positioned to withstand the current difficult operating environment and to take advantage of growth opportunities in the sector as they arise”, according to CEO, Brett Godfrey. 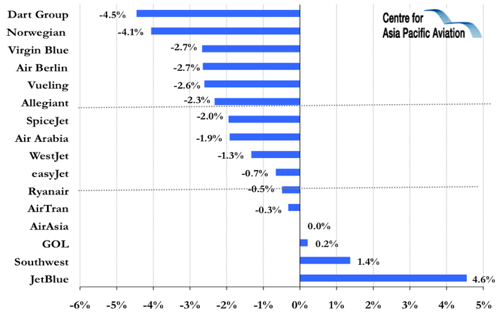