Virgin Blue and Spicejet led the way, with shares up 6.9% and 6.4% respectively, followed by Kingfisher, whose shares also improved 6.3%.

Qantas, Japan Airlines and Singapore Airlines also gained yesterday, up 4.6%, 1.2% and 0.6%, respectively. Cathay Pacific shares also gained, up 4.4%, after slipping 5.1% on Monday, on news of continued weak passenger and freight demand and depressed yields in Jun-2009.

On 12-Jul-09, the KOSPI fell by 3.53%, the largest daily loss since 15-Jan-09, although the South Korean market since gained 2.2% yesterday. According to Morgan Stanley, the South Korean market is expected to remain bearish in the near future, with the investment bank stating, “the near-term market weakness is expected in Korea on the back of recent out-performance and less favourable domestic and global liquidity going into the second half of 2009”. This is hurting the airline sector. 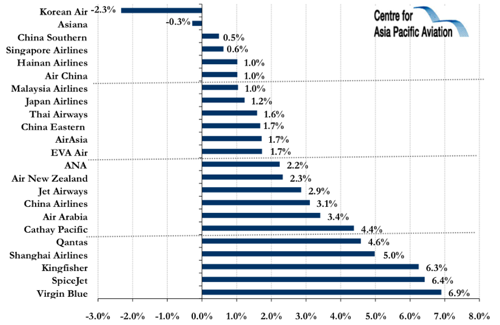 Earlier this week, the Indian Ministry of Civil Aviation reported that domestic passenger numbers rose 5.7% year-on-year in Jun-2009 to 3.7 million, indicating that the market, which contracted for 12 consecutive months from Jun-2008, may finally be on the road to recovery. In the month, Kingfisher Airlines and SpiceJet reported passenger traffic growth of 79.5% (including Deccan figures) and 29.5%, respectively, with Kingfisher remaining the market leader, capturing 24.5% of market share in Jun-2009.