Korean LCCs are increasing their market share, accounting for 10% of the international market and just under 50% in the much smaller domestic arena. But they are still passing up numerous opportunities, and these are becoming more apparent and with greater impact as LCCs increase in North Asia, notably Japan.

Two – Air Busan and Jin Air – are tethered to their full-service parents while independent Jeju Air has done comparatively well and preparing for an IPO to advance growth. But smaller independent LCCs Eastar Jet and t'way are still moving up. They straddle the low-cost and full-service spectrum, being closer to low fare than low-cost airlines. While they argue the Korean market is not ready for LCCs, they know they must move as international competition intensifies. They only need to look at Japan's Peach, which is finding success in another market once thought to be too sensitive for LCCs. AirAsia Japan's failure is a reminder that finding the nuances and achieving balance between management style, market demand and the balance sheet is not easy.

Korean LCCs have twice as much international capacity as foreign LCCs 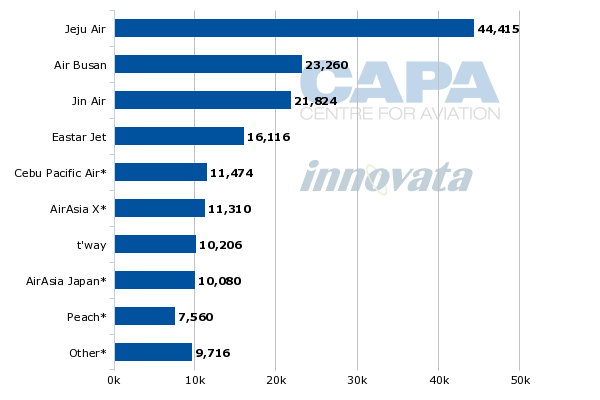 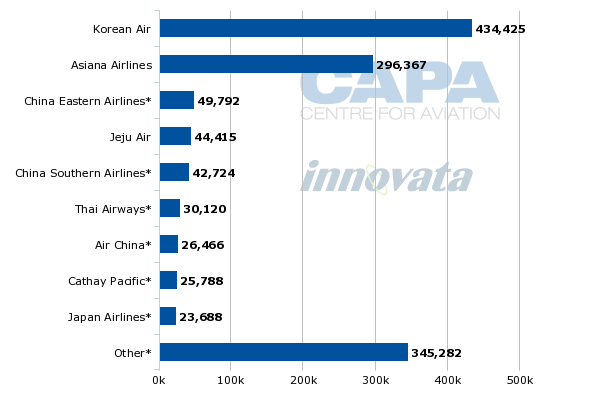 According to Korea's Ministry of Land, Transport and Maritime Affairs, international LCCs comprised 9.2% of Korea's international market in 1H2013, up 2.5ppts. While the data did not give a breakdown between foreign and local carriers, Korean carriers accounted for two-thirds and foreign carriers one-third, according to OAG.

In a regional comparison, LCCs in the Philippines account for 30% of international capacity, of which Filipino LCCs account for 74%.

Those are developed LCC markets whereas Korea is still growing. Its LCCs have been relatively timid, which could see them lose market share in the future. Their international presence has ramped up in recent times, with Peach and Scoot having launched just over a year ago. AirAsia X, which initially served Seoul Incheon from Kuala Lumpur, in Jul-2013 added a Kuala Lumpur-Busan service.

In Sep-2013 Peach will add an Osaka Kansai-Busan daily service. Peach could add Kansai-Busan services as well as more flights from other Japanese cities. Jetstar Japan is still serving only the domestic market but has flagged that Korea will be a large part of its international network which has been delayed. Additionally, Seoul could see a link from AirAsia X's forthcoming Bangkok base.

Hong Kong Express had limited capacity in 1H2013 according to OAG. Hong Kong Express later in 2013 will be transformed into a LCC. If Hong Kong Express returns to Korea, its capacity will be counted as LCC. Additionally, its adoption of the LCC model could see it more sustainably serve the Korean market, leading to higher capacity.

Korea had prohibited new Filipino carriers from serving Korea while the Philippines did not pass its ICAO audit. Now that the Philippines has passed the audit, carriers like AirAsia Philippines could enter. This could prove problematic as the Korea-Philippines market already experiences over-capacity during certain times of the year.

Korean LCCs increased their share of the international market in 1H2013 by 2.5ppts to 9.3%, according to government data. Korean carriers are strongest on routes to Bangkok, Japan, Cebu, Guam and Hong Kong.

Bangkok is a popular tourist destination, but from the Thai side only Thai Airways and Business Air have capacity. Thai AirAsia is Thailand's only scheduled international LCC (Nok has unscheduled international services) but prefers to keep its flights under four hours; Bangkok-Seoul is about 5.5 hours. Korean LCCs have not imposed a perimeter shorter than the natural range of their all-narrowbody aircraft. Despite this advantage to Korean LCCs, they comprise about 20% of the market, their fourth strongest by market share.

Market share between Seoul and Bangkok could decrease with AirAsia X's entry, which would also pressure Korean LCCs as their cost base is higher and they are not as efficient, even without considering AirAsia X only operates widebodies, which reduce unit costs. 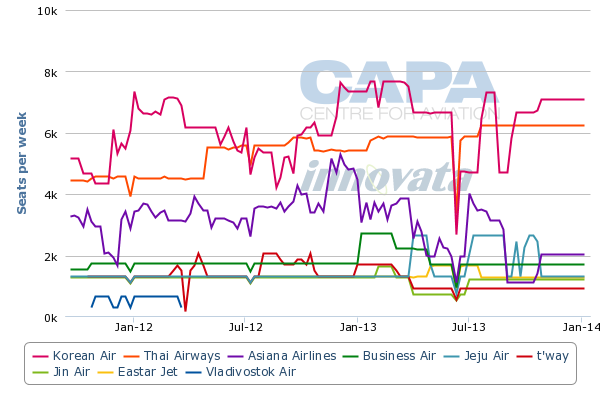 Eastar Jet and Jeju Air operate on this segment. In Jul-2013 their combined share is about 19%, and are surpassed by Peach, which accounts for 24% by itself. 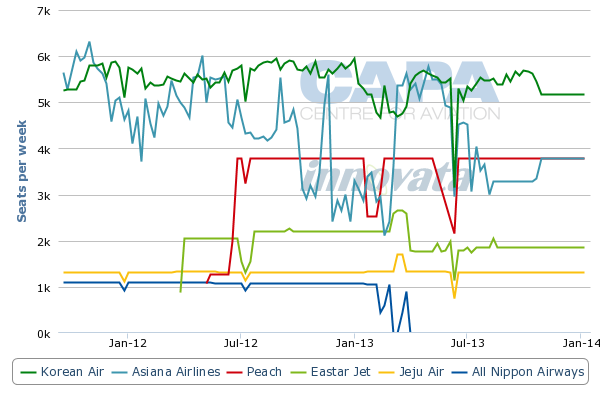 Japanese LCCs serve Fukuoka but for now only as a domestic destination. There is a strong chance that if they opened international routes from a new Japanese base, Korea would be a primary destination. Korea is Japan's single largest destination of international seats. 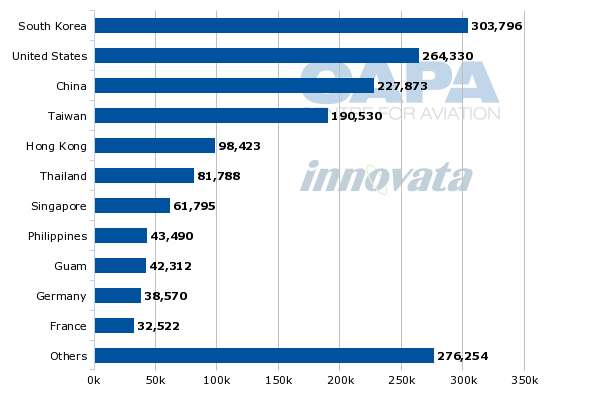 Given the roles of Korea and Japan's four major airlines in owning part or all of the main national LCCs, it is unsurprising that they are not keen to see LCC competition on their plum inter-capital cities.

AirAsia Japan is the sole Japanese LCC to serve Seoul-Tokyo. Air Busan and Jin Air are noticeably absent from the Seoul-Tokyo market. This is largely due to their parent airlines being cautious about cannibalisation of their traffic. This may change if other LCCs enter the market. 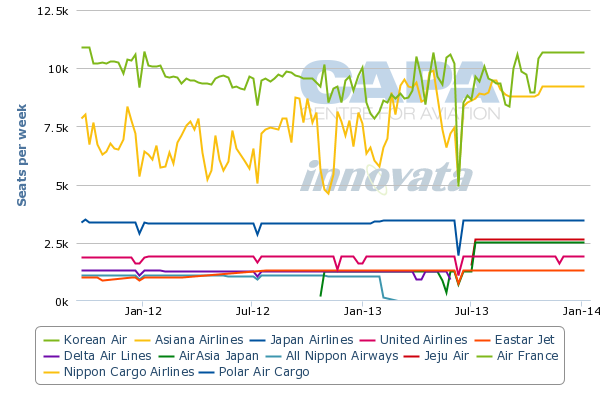 Seoul-Guam is another example of Korean LCCs not meeting their potential. Only three carriers, all Korean, operate the route: Korean Air and its Jin Air subsidiary, and Jeju Air, effectively making it a duopoly route.

There is unlikely to be major movement in this market, with the exception perhaps of other Korean LCCs entering, subject to government approval. There is a tidy arrangement with flag carrier Korean Air and Jin Air having access to Guam but not Saipan, a lesser beach market from Korea.

However, Asiana, Korea's smaller carrier, serves Saipan while Korean Air and Jin Air do not. Asiana's LCC subsidiary Air Busan does not serve Guam or Saipan. 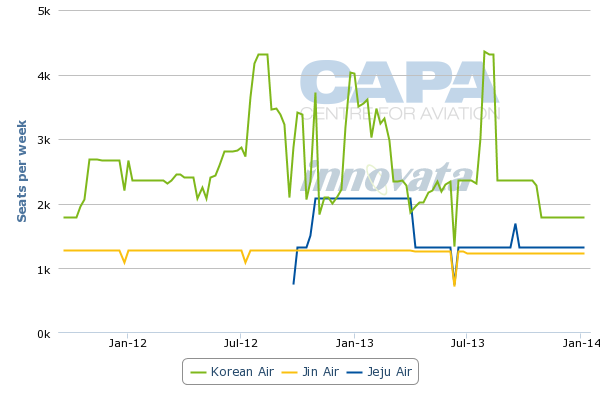 The curtailing of subsidiary LCCs is on show also in the Incheon-Cebu market, of which Korean LCCs captured about 20%, making it their fifth largest by market share. Jeju Air has about twice the capacity of Jin Air but Jin Air does increase capacity to almost the level of Jeju Air in limited peak seasons. Jin Air should theoretically, with the backing of the mighty parent Korean Air, be able to do better than Jeju Air, but once again it is on a leash. Cebu Pacific has about the level of capacity as Jeju Air. The presence of Asiana as well as larger capacity from Korean Air dilute the LCCs' market share.

Even though Cebu is as leisure-oriented as Guam, Asiana and Korean Air likely make more of an effort as Cebu is better known internationally than Guam. This allows sixth freedom traffic whereas Guam is primarily a Korean and Japanese destination. There is very little cooperation between Air Busan/Jin Air and their respective parents Asiana/Korean Air. As noted above, the Korean share of the market will likely decrease as Filipino carriers make further inroads. 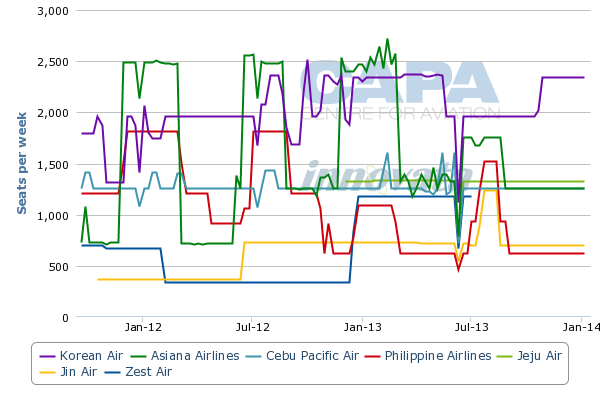 Korean LCCs have a tiny share of the Seoul-Hong Kong market, reflective of the large full-service capacity and lower competition: from the Hong Kong side there is only Cathay Pacific. The market is un-stimulated with fares attracting a yield premium. No doubt LCCs could make inroads but so far only independent Jeju Air has made gains in the market. There are other independent Korean LCCs, but they have not seen nearly as much success as Jeju Air. Jin Air once again has less capacity than Jeju Air.

Later in 2013 Jin Air plans to increase Hong Kong capacity, but only by bringing it five weekly flights; Jeju is daily. A recent open skies agreement between Hong Kong and Korea clears any regulatory hurdles, but Hong Kong slots are now becoming difficult to obtain. Growth is most likely from the emerging Hong Kong low-cost scene. 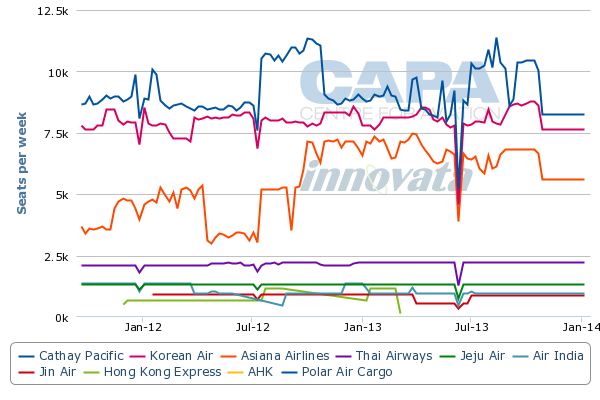 Korean LCCs account for nearly half of the domestic market

According to Korean government data, Korean LCCs accounted for 47.8% of the domestic market in 1H2013, up 4.7ppts. But this is a relatively small amount of capacity. Domestic seats comprise about one quarter of the Korean market. The Korean domestic market is small, a result of the high-speed KTX train efficiently linking most parts of the country. Unlike Japan, high-speed rail is also affordable, and Asiana and Korean Air have reduced capacity and fares.

The largest domestic routes are almost exclusively to Jeju, a tourist getaway on an island not served by KTX. Domestic routes are ideal for LCCs as they are heavily leisure and Korea's small geography means full-service carrier comforts are not in great supply. Reflecting Jeju's strength, there are more domestic seats to/from Jeju than any other city in Korea, including Seoul. 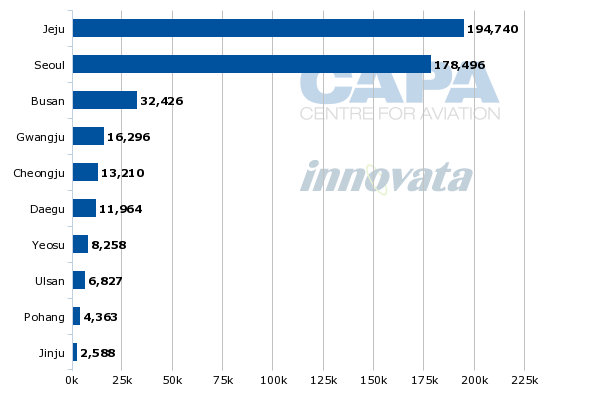 Korean LCCs have amassed a 50% market share or greater on four routes, three to Jeju. The government's ranking of the six routes LCCs perform best on includes only one non-Jeju service, Seoul Gimpo to Busan.

There are 20 domestic routes in Jul-2013 according to Innovata. LCCs have a large market share on many of the top routes, including the link from Seoul to Korea's second main city, Busan. Seoul-Busan is a trunk route and considered the most corporate route given business ties between the cities and the need to access Seoul from Busan for international services.

Asiana has elected to serve the market by deploying Air Busan, hence the notable LCC capacity. Air Busan loses money because of competition with KTX, but loses less than if Asiana were still on the market. Asiana codeshares on Air Busan. Korean Air, however, maintains its own capacity. Jin Air does not serve Seoul-Busan.

Overall Korean LCCs in 1H2013 accounted for just under 50% of the market. In comparison LCCs account for 53% percent of the Malaysian market, 86% in the Philippines and 57% in Thailand, according to Innovata.

At current growth levels, Korea's LCCs should break the 50% market share barrier in a year. This stronghold is commendable but the real pot of gold in Korea is in its international market, and here the LCCs' performance is still wanting.

Outlook: Korean LCCs could be capable of much more

There is no doubting the potential for Korean LCCs, which theoretically should be able to have a strong cost base advantage to Japanese LCCs owing to lower costs in Korea. And although the yen is depreciating, Korea is still a more affordable destination.

These are the right ingredients for LCC growth. Jeju Air has shown success, but it admits there is still much to be done, both in terms of growth and business models. Korean LCCs are straddling the low-cost and full-service spectrum, offering frills and not being as efficient as peers. This weakens demand potential as well as competitive ability.

There are positive steps to be found in Jeju Air being mindful of excess baggage charges and looking for other ancillary revenue opportunities. Jin Air is also charging for snacks now, but doing so almost at cost, suggesting it would rather not offend than make money. This could be seen as stereotypical of service and face-oriented Korea. But there is a balance to be found between this and the ruthlessness of some LCCs.

At the Korean LCCs that are subservient to their parent companies, the tight leash needs to be relaxed. As Japanese LCCs and independent Korean LCCs ramp up Seoul-Tokyo services, the temptation to enter will be greater for Air Busan and Jin Air. Their respective owners Asiana and Korean Air are still finding their way with a complementary dual-brand strategy.

They have the brands and strength to achieve synergy and maximise profits. For now, there is a high degree of isolation between the full-service carriers and LCCs. This is opportunistic for the independent LCCs, notably Jeju, which is preparing for an IPO to fund future growth. But the Korean market is by no means close to maturing. The race is still on for whoever chooses to take the lead.