Lion Air Group’s pace of expansion is about to accelerate as it takes delivery of its first A320 and increases its 737 delivery rate. The group plans to add over 30 aircraft in 2H2014 as it increases its overall average monthly intake from three to five aircraft – a rate it will maintain in 2015, resulting in a staggering 60 deliveries next year.

At the same time AirAsia Group is slowing its fleet expansion, particularly in the Southeast Asia market. AirAsia is growing its Southeast Asian fleet by only six aircraft in 2H2014 and may not add any aircraft in 2015 as the focus will be on spooling up new affiliates in India and Japan.

If Lion does not follow AirAsia in slowing down growth in Southeast Asia it will quickly shoot past AirAsia. There is a risk market share gains will come at the expense of yields and profitability as several Southeast Asian markets are already suffering from overcapacity - but there is a larger strategic game being played out now.

The rapid growth of AirAsia and Lion over the last decade have driven up the LCC penetration rate within Southeast Asia from about 4% in 2003 to almost 60% in 1H2014. 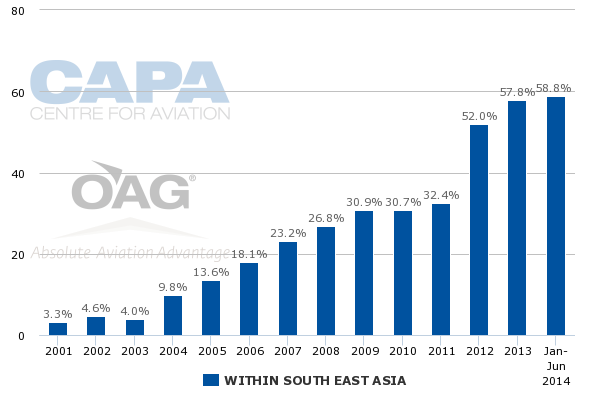 Note: Jump from 2011 to 2012 driven by reclassification of Lion Air as low-cost carrier
Source: CAPA – Centre for Aviation & OAG

AirAsia currently operates 159 single-aisle aircraft in Southeast Asia while Lion has 150 aircraft in its single-aisle fleet (including 144 at LCC subsidiaries or affiliates and six at full-service subsidiary Batik Air). These tallies exclude widebody aircraft – Lion has two 747s while AirAsia’s sister long-haul LCC group AirAsia X has a fleet of 20 A330s.

Southeast Asia’s widebody LCC segment is growing rapidly but from a small base and competes in a market which is relatively unpenetrated. The LCC penetration rate to and from Southeast Asia is still less than 20%. This report specifically analyses Southeast Asia’s short-haul sector and the planned growth rates of AirAsia and Lion.

The AirAsia-Lion battle is now approaching a major fork in the road as the two groups adopt radically different growth strategies.

Assuming Lion takes all the aircraft it is slated to receive in 2H2014 and 2015 and assuming AirAsia does not reverse any of its recent decisions to sell and defer aircraft, Lion will quickly overtake AirAsia as a larger group. Even when removing Batik aircraft from consideration (as Batik follows the full-service model), Lion will soon overtake AirAsia.

Lion’s LCC fleet is expected to reach 166 to 168 aircraft at the end of 2014, putting it above the AirAsia figure of 165. (The group has said Batik will have a fleet of 16 aircraft by the end of 2014; it has not provided breakdowns for its other subsidiaries/affiliates but as all its other subsidiaries/affiliates are LCCs the total LCC figure will be 166 to 168 aircraft.)

AirAsia Group plans to add only 10 aircraft in 2015, but have the ability to adjust

The gap will widen further in 2015 as AirAsia has deferred 19 of its 29 deliveries originally slated for 2015 and will need to allocate its remaining deliveries to its new affiliates outside Southeast Asia. In fact AirAsia may need to reduce the size of its Southeast Asian fleet in 2015 in order to free up more aircraft for start-ups AirAsia India and AirAsia Japan.

AirAsia India launched services in June-2014 while AirAsia Japan plans to launch services in mid-2015. AirAsia is clearly focusing on short to medium term growth in India and Japan as it seeks to diversify its portfolio and reduce its reliance on Southeast Asia.

AirAsia could potentially keep about half of the aircraft it was planning to sell in 2H2014 and instead move them to India as the group’s current fleet plan has only one aircraft allocated to AirAsia India for all of 2014. But such an adjustment will not impact the numbers for any of the Southeast Asian affiliates, which include two additional aircraft in 2H2014 for Malaysia and four additional aircraft for Thailand. The Indonesian and Philippine fleets are expected to be maintained at 30 and 18 aircraft respectively in 2H2014. (The Malaysia figure is a net figure as all 12 aircraft slated to be sold are coming from Malaysia while the Malaysian unit takes most of the new deliveries.)

These changes are relatively insignificant compared to the adjustments for 2014 and 2015 as the group is still planning to add at least 20 aircraft per annum in 2016 through to 2018 - compared to the much more conservative figure of 10 in 2015. There is also plenty of time for AirAsia again to adjust its 2016 to 2018 delivery totals should market conditions warrant.

AirAsia may also still have some flexibility with its 2015 figures. An adjustment would be logical given that since the deferrals were announced the group has decided to launch a joint venture in Japan in 2015.

Even with an adjustment, the extra aircraft will entirely or almost entirely be allocated to Japan and India. The group’s Southeast Asian affiliates are not expected to see much if any fleet growth in 2015.

AirAsia slowdown is sensible but gives Lion an opening

Some investors have challenged AirAsia for expanding too rapidly in Southeast Asia. There are still opportunities for further LCC growth in Southeast Asia as the region’s long-term economic outlook remains strong and the region’s middle class continues to grow rapidly. But the capacity growth has exceeded the growth in demand over the last year, resulting in overcapacity. Virtually all carriers in the region have been impacted as yields and load factors have been reduced.

Slowing down the pace of growth in Southeast Asia is sensible given the current challenging market conditions. Deferring A320s in 2014 to 2017 also has enabled AirAsia to transition 26 of its A320ceo orders into A320neos. This is also a sound move given the significantly improved operating costs of the A320neo and the potential challenges of owning late model A320ceos, which many sources suggest could see a drop in values after the A320neo enters service.

But, on a strategic level, slower expansion in Southeast Asia will give an opportunity for rival Lion to overtake AirAsia and quickly widen the gap.

Meanwhile the Lion Air Group plans to take delivery at the end of Jul-2014 of the first A320 from its landmark 234-aircraft order that it placed with Airbus in early 2013. Lion’s initial delivery rate from Airbus is one aircraft per month. This is expected to increase to two aircraft per month in a few years as Lion starts to take the A320neo.

As CAPA previously outlined, the group has allocated the six A320s which will be delivered in 2H2014 to Batik. The first aircraft rolled out of the paint hangar at Airbus’ Toulouse facility in mid-Jun-2014 and is currently waiting for the cabin to be installed. (Batik is outfitting its A320s with the Lumexis in-flight entertainment system.)

The Lion Group is also continuing to add ATR 72-600s at a relatively (although not quite as rapid) pace. In recent years the group has been taking an average of one ATR turboprop per month. The group has said it plans to take a total of 14 ATR 72-600s in 2014.

The group took six ATR 72-600s in 1H2014, five for Malindo and one for Thai Lion, leaving it with eight deliveries in 2H2014. This includes the normal one aircraft per month plus two additional aircraft.

So far the group shows no signs of even considering deferrals. As Lion has already phased out its 737 Classics and MD-80s, there is little flexibility left in its fleet.

Aircraft sales are also not likely for another couple of years as its oldest 737NGs were manufactured in 2007. (In comparison, AirAsia began taking A320s in 2005, giving the group an opportunity to start replacing some of its older A320s.)

The next one to two years will continue to be defining times for Southeast Asia’s dynamic LCC sector as Lion continues to expand at a breakneck pace while AirAsia slows down. While there are several other LCC players in Southeast Asia, Lion and AirAsia have undoubtedly emerged as the trendsetters.

Southeast Asia’s other LCCs are all now much smaller and combined operate about 100 aircraft less than the Lion and AirAsia combination. The two other main LCC groups in the region, Jetstar and Tigerair, are each subsidiaries or affiliates of full service airlines and part of more complex strategies. They each currently only have 25 aircraft based in Southeast Asia. Cebu Pacific, which is Southeast Asia’s biggest independent LCC, is larger and currently has a fleet of about 50 aircraft.

Jetstar and Tigerair previously were angling to develop large groups in the Southeast Asian market but have essentially given up that fight. By closing down its Indonesian affiliate and selling its Philippine affiliate to Cebu Pacific, Tigerair now only has one base in Southeast Asia, Singapore, where it is significantly slowing down expansion in response to overcapacity. (Tigerair still has an affiliate in Australia and is planning to launch an affiliate in Taiwan in 2H2014.)

Jetstar also has halted expansion in Singapore and is very small with tepid expansion in Vietnam, where VietJet has emerged as the largest LCC. Jetstar is now focusing more on North Asia; it has a fast expanding and successful affiliate in Japan and a planned affiliate for Hong Kong. Reports even suggest that Jetstar has been approached by Lion to sell its stake in Singapore-based Jetstar Asia, an unlikely move as Singapore is central to Jetstar's Asian strategy. Nonetheless the prospect of a closer relationship between Lion and Jetstar is intriguing and would potentially swing the balance of power in the Southeast Asian LCC sector.

Tigerair will for now remain the largest LCC in Singapore, Cebu Pacific in the Philippines and VietJet the market leader in Vietnam. VietJet also still has ambitions to build a group in Southeast Asia, starting with Thailand. But VietJet and any other group looking to take on AirAsia and Lion will need deep pockets - and probably some good friends in the business.

The first chapter in the battle for Southeast’s Asia short-haul LCC sector has already been written, with AirAsia and Lion the main victors. As Lion puts the foot on the accelerator despite indications of overcapacity, everyone could be in for a bumpy ride. One thing is clear: the Southeast Asian LCC book will have many more chapters and more twists than a bag of pretzels.