Lion Air could make significant progress in 2014 in its quest to further increase its already leading share of the Indonesian domestic market. The group plans to add nearly 30 aircraft under its three Indonesian operating certificates in 2014, most of which will be used to expand in Indonesia’s huge and rapidly growing domestic market.

The Lion group’s expansion in Indonesia slowed in 2013 as it focused on spooling up its new affiliates in Malaysia and Thailand. There will be more growth for Malindo Air and Thai Lion Air in 2014 but, as the group will take significantly more aircraft compared to 2013, there will be an opportunity to pursue faster growth in Indonesia.

Lion has a medium to long-term goal of capturing a 60% share of the domestic market, up from a 45% share in 2011 and 2012. A 60% share seems unrealistic given the expansion plans of some of its competitors but further gains are likely, starting in 2014.

The Lion group says it transported an estimated 36 million passengers in 2013 across its three Indonesian subsidiaries – LCC Lion Air, regional LCC Wings Air and full-service carrier Batik Air. This includes approximately 35 million domestic passengers as Lion and Wings are predominately domestic operators with only eight scheduled international routes. Batik, which launched services in May-2013, currently only operates domestically but is planning to expand into the international market in 2H2014.

Lion group Indonesia passenger growth slows to about 10% in 2013

The 9% increase represents a significant slowdown compared to the 17% growth in passenger traffic the group recorded in 2012 and the 31% growth from 2011. The group has seen its growth rate slow every year since 2010, when it grew passenger traffic by 42%. 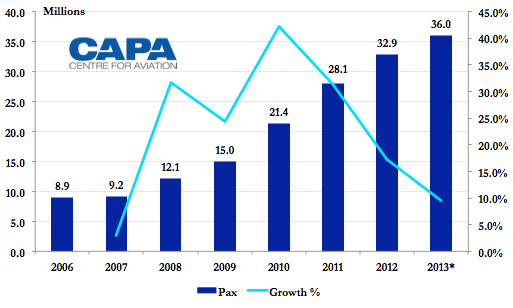 But a large chunk of the 21 deliveries for the group’s Indonesian subsidiaries were used as replacement rather than growth aircraft. In 2013 the group phased out its fleet of MD80 family aircraft, which were operated by both Lion and Wings. Bombardier Dash 8s, which were operated by Wings, were also phased out in 2013. In addition Lion Air lost one of its 737-800s in the May-2013 accident in Bali.

Source: CAPA Fleet Database
Note: orders listed are for the group and will be divided between Lion Air, Batik Air, Malindo Air and Thai Lion Air. Some aircraft could also potentially be leased to carriers outside the group by leasing subsidiary Transportation Partners.

Source: CAPA Fleet Database
Note: orders listed are for the group and will be divided between Wings Air and Malindo Air. Some aircraft could also potentially be leased to carriers outside the group by leasing subsidiary Transportation Partners.

Source: CAPA Fleet Database
Note: no orders are listed as Batik sources its aircraft from the order book of Lion Air

The group’s growth in Indonesia will accelerate in 2014 as the group expects to take 48 aircraft this year and there are no retirements planned.

Lion at least for now plans to continue operating 737 Classics, which it uses on thinner routes and as back-up aircraft. In addition to its four active 737-300/400s, Lion Air has another five 737-400s which it claims are still part of its fleet but are listed as stored aircraft by the CAPA Fleet Database as they have not flown for several months. It is possible for these aircraft to be returned to active service, which could result in even faster capacity growth.

Of the 48 additional aircraft for the group, about 28 are expected to end up in the Indonesian market. Thai Lion has been tentatively allocated eight 737s while Malaysian affiliate Malindo will most likely receive 12 aircraft (a combination of 737s and ATR 72s).

The Thai Lion and Malindo figures are subject to change as the group often adjusts allocations a couple of months prior to delivery depending on market conditions. But the most likely scenario will see the Indonesian fleet grow by 22% from 127 aircraft to 155 aircraft.

The six A320s represent the first batch of aircraft from the 234-aircraft order the group placed with Airbus in Mar-2013. Batik will be the only Lion group carrier to operate the new type in 2014.

The most likely breakdown will see Lion Air take nine 737s in 2014, Thai Lion eight aircraft, Malindo seven aircraft and Batik six aircraft. But again this is subject to change as the year unfolds because Lion is a nimble group.

ATR 72-600 deliveries are slated to continue at a rate of one per month. The most likely breakdown would see five aircraft end up at Malindo and seven aircraft at Wings.

Garuda has grown faster than Lion for three consecutive years

The anticipated 22% fleet growth at Lion's Indonesian subsidiaries would surpass the planned expansion at rival airline group Garuda Indonesia, which plans to grow its fleet by 19% in 2014 from 134 to 160 aircraft. The Garuda figures include 33% growth at its budget subsidiary Citilink from 24 to 32 aircraft and 16% growth at Garuda mainline from 110 to 128 aircraft. Citilink only operates domestically while Garuda mainline is planning double-digit capacity expansion for 2014 in both the domestic and international markets.

In the years prior to 2011, Lion shot past a struggling Garuda, becoming the largest Indonesian carrier in 2009 and widening the gap in 2010. Regaining the distinction of being Indonesia’s fastest growing carrier is imperative if Lion is to achieve its goal of further growing its share of the market and come even close to its goal of securing a 60% slice of Indonesia’s huge domestic market. 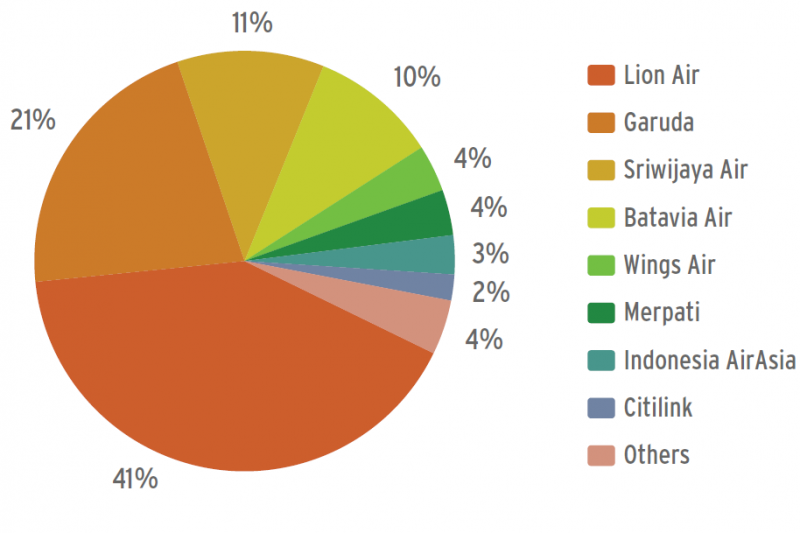 While it will be several months before official Indonesian government data is available for 2013, Garuda again clearly gained more domestic market share than Lion in 2013 as Garuda domestic passenger growth exceeded 20% while Lion’s domestic traffic increased by approximately 10%. Lion was likely still able to grow its share slightly in 2013 as Batavia Air, which captured a 10% share of the Indonesian domestic market in 2012, suspended operations in early 2013. But the Garuda group likely ended up capturing a bigger share of the slice vacated by Batavia Air.

Indonesia AirAsia and Tigerair Mandala also saw their shares grow significantly in 2013 but from much smaller bases. Tigerair Mandala, which launched operations in May-2012, transported 1.9 million passengers in 2013, up from less than 400,000 passengers in 2012. Tigerair does not provide a domestic/international breakdown for its traffic but its Indonesian affiliate operated a relatively even mix of domestic and international services in 2013.

Indonesia AirAsia reported 35% total passenger growth for the first nine months of 2013 to 5.7 million. The AirAsia Group has not yet reported operating figures for the full year. Indonesia AirAsia is Indonesia’s largest international carrier and is a relatively small player in the domestic market with only a 3% share in 2012, but over the past year the carrier has roughly doubled its domestic capacity.

Sriwijaya is the third largest domestic carrier in Indonesia, capturing an 11% share of the market in 2012. Sriwijaya did not grow as fast as any of its main competitors in 2013 but is looking to accelerate growth in 2014 using its new regional subsidiary Nam Air, which launched services in Dec-2013.

The launch of Nam, the continued rapid growth at the Garuda group, including Citilink, and more rapid expansion at Indonesia AirAsia will pose challenges for Lion. But Lion is in a strong position as the market leader and is poised to grow faster than any of its competitors in 2014 as it adds nearly 30 aircraft into the Indonesian market.

Lion should be able to capture at least a 50% share of the domestic market in 2014 and make some progress towards its ultimate goal of 60%. Lion has the aircraft on order to potentially meet the 60% goal, depending on the rate of expansion at Malindo and Thai Lion and if new affiliates in other countries are established. But ultimately the group may not be able to capture such a big slice of the market unless its main competitors slow down expansion or there is consolidation – which is a possible outcome as competition intensifies, led by a more aggressive expansion from Lion.