All the major LCC shares were down on Monday (15-Jun-09), with GOL the worst affected, crashing 7.6%. The reduction coincides with the release of GOL's 2008 annual report, in which the LCC concluded that strong demand has been "not enough to maintain airline profitability".

Despite reporting a USD29.6 million consolidated net profit in 1Q2009, GOL is expected to face intensive competition in the domestic market looking forward, due to lower demand and high levels of capacity across the industry, lowering its ability to increase passenger yields. The carrier previously reported it is unlikely it will be able to increase fares in 2009. The LCC has also downgraded its passenger forecast for 2009, from 29 million to 28 million passengers, and the domestic market growth rate is 2-4%, down from 6% previously.

In Europe, Ryanair and easyJet shares both fell by 2.8%, with Air Berlin stock down 5.5%, while in North America, Southwest shares slipped 2.0%, while Allegiant slumped 5.8%. 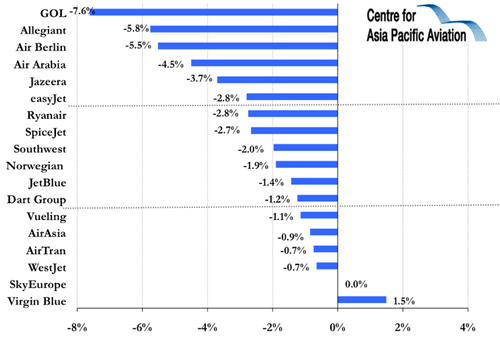