Shares in Norwegian Air Shuttle gained 2.5% yesterday, on a day that saw share price reductions for the majority of listed LCCs around the world.

Earlier this week, Norwegian Air Shuttle announced plans to lease three new B737-800s from AWAS, the first of which will be delivered in early 2011. The carrier aims to have 70 B737-800 in its fleet by 2014. The initial delivery will be the first of its Boeing Sky Interior B737-800s to enter the market.

Last week the carrier stated it plans to order widebody aircraft from Boeing or Airbus in Oct-2010 as it prepares for the launch of its first long-haul routes.

The company will choose between B787 and A350 equipment, with Mr Kjos commenting: "The Dreamliner is nearest in time with regards to delivery, but Airbus is a very good product ... Of course it’s been worrisome for everybody that we’ve had delays with Boeing, but on the other hand it’s an incredibly complicated aircraft. We don’t know if the A350 will have delays. This is completely different technology, so it would almost be surprising if they didn’t."

Elsewhere in Europe, shares in Air Berlin slumped 3.8%, while Cimber Sterling fell 3%. easyJet and Ryanair were 2.1% and 0.1% weaker, respectively. 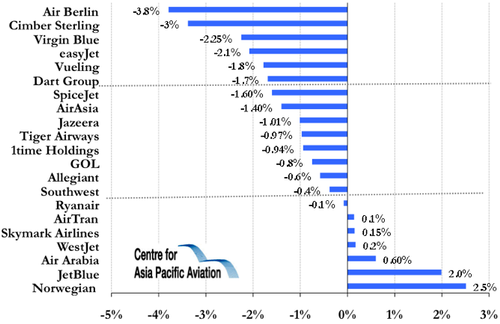