South Korea’s five major LCCs held an aggregate domestic market share of 42.3% in 3Q2011 in the third quarter of 2011, up from the 40.3% in the six months to Jun-2011 (1H2011), which itself was a new record for LCC penetration in the North Asian nation. This penetration, as confirmed by South Korea’s Ministry of Land, Transport and Maritime Affairs, marks a significant rise from a combined market share of just 9.7% three years ago.

Jeju Air, Air Busan and Eastar Jet reported combined revenues of approximately USD180 million in the 12-month period for an operating margin of -26% for the three carriers, according to the MLTM. The financial picture has improved in 2011, with the same four LCCs reporting combined revenues of KRW512.6 billion (USD457.2 million) in 1H2011 and a combined operating profit of KRW21 billion (USD18.8 million) for an operating profit margin of 4.1%. However, the future of T'way remains uncertain, with the carrier reportedly up for sale again, with Jeju Air named as a potential new owner.

LCC penetration in South Korea slightly above Asian average at 29.5%

The recent growth spurt in LCC capacity in the domestic market has meant that LCC penetration in the country has risen to become slightly above the average in Asia Pacific (and the world), at 29.5% of total domestic capacity (seats) share in the first nine months of 2011 (compared to an average of 19% within Asia Pacific and 24.4% worldwide). LCC penetration in South Korea, while higher than the other North Asian countries, remains lower than a number of the Southeast Asian nations. 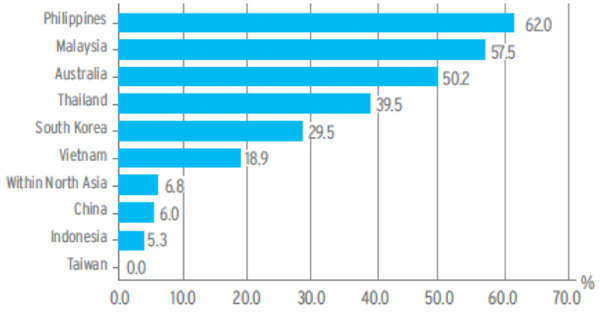 South Korea, like the rest of North Asia, has been slow to adopt the LCC model, especially when compared to its Southeast Asian neighbours, with the main impediment to expansion being conservative regulatory regimes, with protectionism still prevalent in the region. But several South Korean LCCs have established over the last five years (though some have failed). The survivors are in the process of restructuring after heavy losses in 2009, and are increasingly looking for offshore growth opportunities as part of their recovery efforts. Over the pat five years, LCCs have witnessed capacity (seats) growth of around 580% between 2007 and 2011, based on data for the first 10 months of the year. 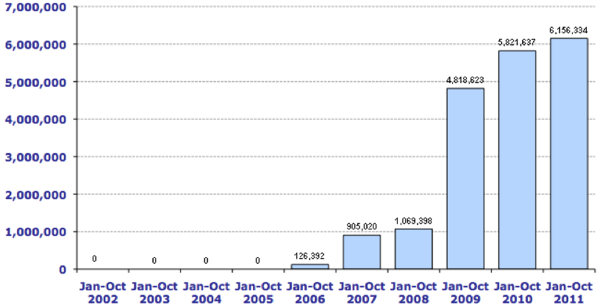 Unlike its neighbours, Korea is inhospitable to foreign LCCs, but has a flourishing low-cost industry. Plans for an Incheon Tiger Airways JV airline were nipped in the bud in Dec-2008, but there are now five LCCs in the market: the independent EastarJet, Jeju Air and T’way Airlines (previously Hansung Airlines), plus two lower-cost units of the flag carriers – Jin Air of Korean Air and Air Busan of Asiana Airlines. In addition to Hansung Airlines, Yeongnam Air suspended services in 2008 due to intense competition and weak demand. In the Korean environment, these airlines are not always typical of the low-cost genre but are at least lower-cost.

However, the influx of new carriers eager to build viable market shares and the presence of an efficient surface transport alternative has made for an awkward pricing environment, translating into low yields, losses and carrier failures.

According to reports in Joongang on 03-Nov-2011, the intensified competition among domestic LCCs is again creating changes in the market. T’Way, formerly Hansung Airlines, is reportedly up for sale, just over a year after bankrupt Hansung acquired new owners in Sep-2010 and was renamed T’Way.

According to Joongang, citing industry sources, Shinbo Investment, T’Way’s major shareholder, decided to sell the airline last month and is currently negotiating with several companies that have shown interest. It has been reported that T’Way has been suffering from financial challenges after Tomato Savings Bank, one of its largest shareholders, was suspended by the Financial Services Commission in Sep-2011.

Jeju Air, owned by Aekyung Group, is reportedly one of the parties considering purchasing it by forming a consortium with a private equity fund. The local newspaper quoted an unidentified official from Jeju Air as saying: “It is true that a PEF has contacted us to see if we are willing to purchase T’Way Air. We are currently examining what benefits acquiring T’Way would bring should we decide to purchase the carrier.”

If Jeju Air opts to acquire T’Way, it will be the first LCC in Korea to own more than 10 aircraft. Jeju operates a fleet of eight B737-800s at present, with a further five on order, with T’Way operating a fleet of four B737-800s.

The effect has been, in search of profits, the previously domestic LCCs have adapted their strategies and are increasingly turning to international routes, although this remains limited. Only 4.9% of international capacity (seats) from South Korea was operated by LCCs in the ten months to Oct-2011, up from 0.2% in FY2006 and 2.3% in FY2010.

Following this change, and as the country’s young LCCs reached their first anniversary of operations, the number of international services offered by LCCs has increased, a trend that should continue, as brand awareness grows and public acceptance of the LCC model builds in North Asia, now that foreign LCCs are entering the Korean market. Local LCCs are likely to continue expanding their geographical scope, to take advantage of South Korea’s growing international air travel market, and diversify away from the loss-making domestic market – and as Korean Air and Asiana Airlines use their LCC units more strategically in future.