Lao Airlines has rapidly expanded its international operation over the past few years with a focus on North Asia, particularly China. Six international destinations have been launched since late 2012, including four in China and two in South Korea.

The new focus on North Asia along with a reduced focus on the domestic market have improved Lao Airlines’ profitability and outlook. However it faces increased competition on international routes within Southeast Asia and will be impacted as Thai AirAsia launches services to Laos, becoming the first LCC in the increasingly popular Lao tourist destination of Luang Prabang.

Changsha, Chengdu and Changzhou were all launched in 2015. Busan, Guangzhou and Seoul were initially launched in late 2012. (Busan was dropped in Mar-2013 but relaunched in Aug-2015.)

In late 2011 Lao Airlines resumed service to Jinghong and upgraded Kunming from ATR 72s to A320s. Jinghong is located in the southern part of Yunnan province less than 100km from the border with Laos, while Kunming is the main city in Yunnan and located approximately 600km from the Laos border. (The journey by road takes several hours as Yunnan is rugged.)

Lao Airlines currently offers almost 8,000 weekly seats to and from North Asia. Its North Asian capacity has steadily expanded since Oct-2011, when it had less than 1,000 return seats. As Laos, particularly Luang Prabang, is a highly seasonal market, capacity levels are typically significantly less during the northern summer months. 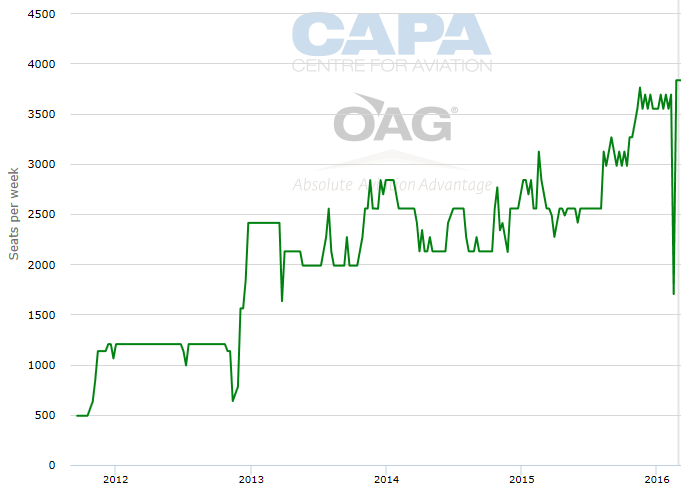 Most of the new destinations under consideration are in China but Lao Airlines is also looking at launching services to Japan and Taiwan. In mainland China, Nanning has been flagged as the next planned destination.

There will also be opportunities to add capacity through new nonstop links from Luang Prabang to North Asia destinations that are only currently served from Vientiane (with domestic connections to Luang Prabang). Lao authorities are planning to expand Luang Prabang’s tiny international terminal, which should open up opportunities for expansion from Lao Airlines and foreign airlines.

As CAPA analysed in a 19-Feb-2016 report, Thai AirAsia, Malaysia AirAsia, HK Express and SilkAir are all planning or aiming to launch services to Luang Prabang by the end of 2016. While Lao Airlines will be impacted by the intensifying competition in its home market, particularly on regional international routes within Southeast Asia, there are still opportunities to expand in less competitive North Asian markets.

Lao Airlines is keen to continue expanding in North Asia as its strategy in recent years of focusing on North Asia has generally been successful. Its North Asian operation is now profitable while its regional international operation within Southeast Asia and its domestic operation remain loss making.

Bangkok has become a challenging market for Lao Airlines

Bangkok, the largest international market for Lao Airlines and Laos overall, has particularly become challenging. It is unlikely Lao Airlines will be able to improve the profitability of its Bangkok operation as competition intensifies with the planned launch of Thai AirAsia on the Bangkok-Luang Prabang and Bangkok-Vientiane routes. 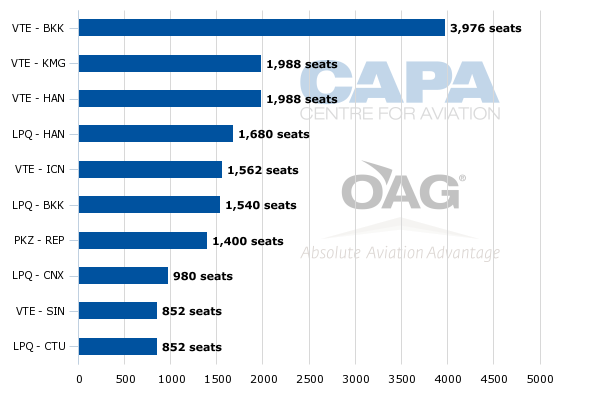 Luang Prabang-Bangkok is still served with ATR 72s and is Lao Airlines’ sixth largest route based on seat capacity but third largest based on frequencies. Lao Airlines also operates four weekly ATR 72 flights to Bangkok from Savannakhet in southern Laos and four weekly ATR 72 flights to Chiang Mai in northern Thailand from Luang Prabang. Neither of these routes are served by other airlines but Bangkok Airways has been looking at launching services from Chiang Mai to Luang Prabang.

Thailand currently accounts for approximately 33% of Lao Airlines’ total international seat capacity. However, its dependence on Thailand is likely to decrease as it continues to expand in North Asia, particularly China, which currently accounts for approximately 22% of its international seat capacity. Capacity reductions to Bangkok are also possible as competition intensifies although strategically Lao Airlines may be reluctant to reduce capacity to its largest market. 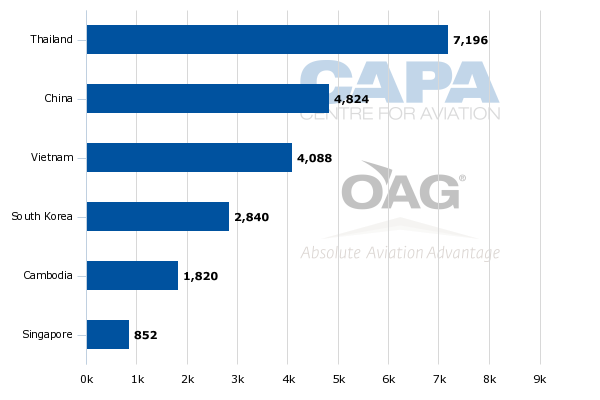 New and enhanced partnerships could potentially improve Lao Airlines’ performance in the Bangkok market as Bangkok remains the main connection point for passengers travelling to Laos from outside Asia including Europe, the Middle East and Australia. Lao Airlines already has a codeshare with Thai Airways covering the Vientiane-Bangkok route and has been working on bolstering its partnership portfolio but has traditionally struggled to attract passengers that are connecting beyond Bangkok.

Lao Airlines also has struggled in the Singapore market, which it entered in late 2011 using its first batch of A320s and currently operates with three weekly flights from Vientiane. Its performance in Singapore has improved as the market has matured and after the Vientiane-Singapore flight was rescheduled to originate in Luang Prabang, providing one stop same aircraft service from Luang Prabang to Singapore.

However, the anticipated launch of flights to Laos by SilkAir on a circle routing combining Singapore with Vientiane and Luang Prabang could make it difficult for Lao Airlines. SilkAir will particularly have an advantage in offering services beyond Singapore through its parent Singapore Airlines. The local Laos-Singapore market is very small and may not be able to support two airlines over the long run.

Lao Airlines also serves Cambodia and Vietnam, two Southeast Asian markets which have closer ties to Laos and historically have been served with turboprops. Vietnam currently accounts for approximately 19% of Lao Airlines’ international seat capacity and Cambodia another 8%.

Southeast Asia overall accounts for approximately 65% although the North Asia component has expanded rapidly in recent years while its Southeast Asia capacity has been relatively flat since 2012. (There was a surge in late 2011 as Bangkok and Hanoi were upgauged to A320s and Singapore was launched.) 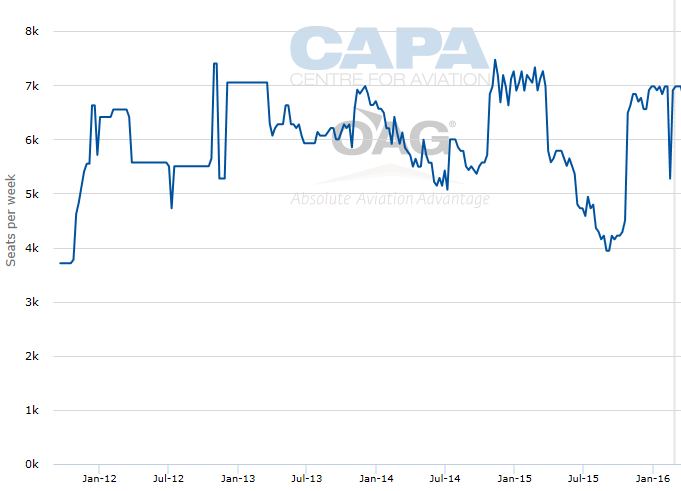 Vietnam Airlines is a major competitor but also a partner

Lao Airlines upgraded Vientiane-Hanoi services to A320s in late 2011 but continues to operate ATR 72s from Luang Prabang to Hanoi and on the Vientiane-Pakse-Ho Chi Minh route. Hanoi is currently served with 19 weekly flights, including 12 from Luang Prabang and seven from Vientiane, while Ho Chi Minh is served with only three weekly flights. Vietnam Airlines also currently operates both Hanoi routes but the two airlines have a reciprocal codeshare on their Laos-Vietnam and Laos-Cambodia services. 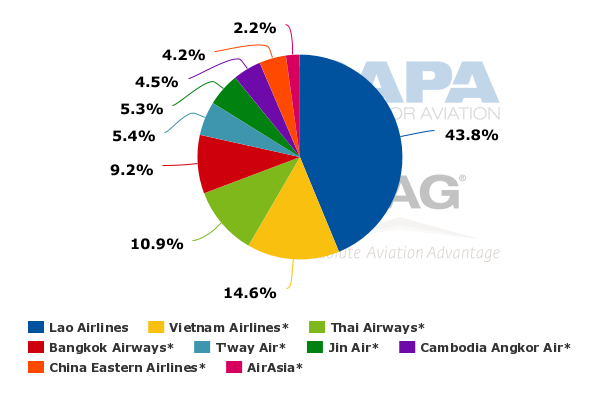 Cambodia Angkor Air operates alongside its sister on the Phnom Penh-Vientiane-Hanoi route. A large portion of Vietnam Airlines and Cambodia Angkor Air traffic from Laos flies beyond Vietnam, mainly to North Asia. As the Lao Airlines-Vietnam Airlines codeshare does not include markets beyond Vietnam the two airlines essentially compete in the growing Laos-North Asia market.

Lao Airlines has not added capacity to Cambodia or Vietnam in recent years as it has instead been focusing on expanding in new less competitive markets. China Eastern is the only Chinese airline currently serving Laos while two LCCs, Jin Air and T’Way, are the only Korean carriers in the Laos market. Lao Airlines for now is the only carrier with nonstop services between Laos and Singapore although Singapore is a much smaller market from Laos than China and South Korea and will soon become competitive.

Laos reported a 10% increase in total visitor numbers in 2014 to 4.2 million with China accounting for nearly half of the 380,000 additional visitors compared to 2013. Year over year visitor growth from China in 2014 was 72.5% while growth from South Korea was 17.5%. Tourism figures for 2015 are not yet available although China and North Asia overall likely again drove most of the growth.

China and South Korea are now the two largest source markets for Laos outside Southeast Asia. A large portion of Southeast Asian visitors enter by road, boat or train while most visitors from North Asia enter by air. Overall only approximately 15% of all visitors to Laos arrived by air in 2014.

The Lao international market overall recorded 8% growth in international passenger traffic in 2015, with North Asia driving much of the growth. The Lao domestic market grew by a slightly more modest 6% in 2015.

Lao Airlines has reduced its reliance on the domestic market over the last few years as part of an increased focus on international services, particularly the more profitable North Asia market. Lao Airlines served 11 domestic airports back in 2011 but currently serves only seven.

Lao Airlines’ domestic operation currently consists of approximately 75 weekly frequencies and slightly under 13,000 weekly seats across eight routes. Domestic seat capacity in Feb-2016 was down approximately 20% compared to Feb-2014 levels, according to CAPA and OAG data.

Vientiane-Luang Prabang accounts for almost half of Lao Airlines’ total domestic capacity. It is currently served three to four times daily and is the only domestic route with some A320 frequencies. 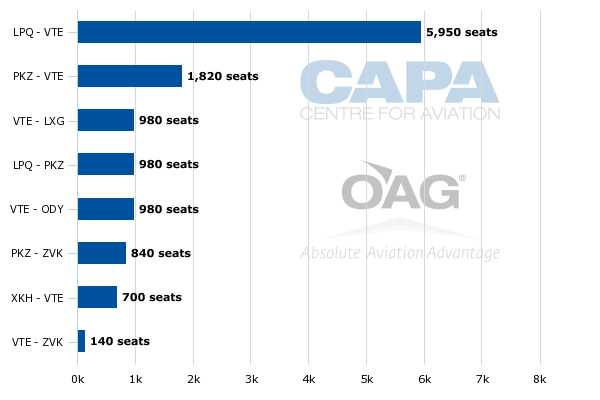 Lao Airlines could grow ATR 72 and A320 fleets

Lao Airlines’ decision to drop smaller domestic markets has enabled it to reduce losses and focus on more viable routes. Focusing on just two aircraft types – the ATR 72 and A320 – has resulted in a more efficient operation.

While Lao Airlines has added four A320s since 2011 it also has expanded its ATR fleet from four to seven aircraft. Currently it operates four ATR 72-500s and three newer model ATR 72-600s, both of which are in single class 70 seat configuration.

Further fleet expansion will likely be limited to ATR 72-600s and A320s. However Lao Airlines currently does not have any commitments for additional aircraft.

A cautious approach to fleet expansion is sensible as there are opportunities to improve utilisation of its current fleet. Lao Airlines may also need to reduce capacity on some Southeast Asian routes as competition intensifies, enabling it to grow in North Asia without necessarily adding aircraft.

Lao Airlines could also increase capacity by reconfiguring its A320 fleet. The entire A320 fleet is in two class configuration and most of the aircraft feature a large 16 seat business class cabin and only 126 economy seats. (All the capacity figures in this report are based on 142 seat A320s and 70 seat ATR 72s.)

Premium demand from Laos is relatively limited, particularly in the China market which primarily consists of price sensitive leisure passengers. A higher density configuration, and potentially an all economy configuration for the fast growing Laos-China market, would be sensible.

Lao Airlines also faces the prospect of renewed internal competition as Lao Central Airlines has been seeking to relaunch operations. Lao Central launched in 2012 and operated the Vientiane-Luang Prabang and Vientiane-Bangkok routes with an all jet fleet before suspending services in 2014.

Lao Central was a privately owned full service airline operating 737-400s and Sukhoi Superjet 100s in two class configuration but struggled to compete against more established airlines. In hindsight it would have been better off focusing on growth markets such as Luang Prabang-China and following an LCC model, particularly as Luang Prabang at the time was not open to foreign LCCs.

A relaunch of Lao Central is far from a certainty given the challenging market conditions, including intensifying competition from foreign airlines. The Lao market can hardly support two international airlines – even if demand grows rapidly. Lao Airlines and its government shareholder may want to see if Lao Central can succeed at relaunching before committing to expanding its own fleet.

The Lao market has huge potential as the small landlocked country focuses more on tourism.

Lao Airlines has succeeded in reducing losses by increasing its focus on North Asia while reducing its domestic operation; as a consequence it has a much stronger position and brighter outlook than a few years ago.

However, like any small flag carrier Lao Airlines faces huge challenges including intensifying competition from foreign airlines. Expansion should be relatively modest and it will not be easy to further reduce losses and become profitable.