North and South American airline stocks were mixed on Wednesday (08-Sep-2010), despite strong gains in wider markets. The Dow (+0.5%) ended trading higher on news Portugal successfully completed its debt auction with solid demand and the US Federal Reserve reported “economic growth at a moderate pace” among five regional banks.

In Latin America, markets were mixed. Brazil’s Bovespa (-0.5%) was pushed lower by state oil company, Petrobras, ahead of the company’s share sale, in which it plans to raise at least USD64 billion. Chile’s IPSA (+1.3%) gained after the Chilean central bank raised its economic growth forecast. The index reached a new intraday high as a result.

LAN Airlines up as domestic and international traffic grows

Cargo traffic increased 16.0%. This increase was mainly due to the recovery in imports to Latin America driven by Brazil and the increase in operations to Europe with the B777 freighter fleet. In addition, in Jun-2010, LAN Cargo launched domestic cargo operations in Brazil to Recife and Fortaleza through its affiliate ABSA. In line with higher demand, capacity grew 17.0%. As a result, the cargo load factor dropped 0.6 ppts to 68.4%.

The decline in load factor was the result of the group’s capacity increase outweighing the growth in traffic for the period. Traffic (RPMs) gained 12.2%, while capacity was increased 1.5%. 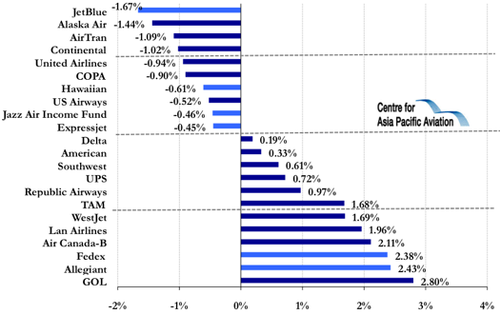