Latin American markets meanwhile moved marginally higher. Brazil’s Bovespa (-0.3%) slipped for a second consecutive day on profit taking by investors. Chile’s IPSA (+0.7%) meanwhile made significant gains, with the market recording a new intra-day high for the sixth consecutive day. The index has been consistently posting new highs since Jun-2010, due to stronger than expected economic growth.

Domestic passenger traffic in Chile, Argentina, Peru and Ecuador rose 17.6%, as capacity increased 8.9%. As a consequence, the domestic load factor for the month increased 5.8 ppts, to 78.9%.

In terms of freight, cargo traffic increased 20.7%. This increase was mainly due to the recovery in imports to Latin America driven by Brazil and the increase in operations to Europe with the B777-200 freighter fleet. In line with higher demand, capacity grew 19.7%. As a result, the cargo load factor rose 0.5 ppts, to 67.9%.

TAM (+0.4%) gained only marginally for the day. The carrier stated in the previous session it is introducing new products, selling tickets through the Casas Bahia retail chain, and conducting a new marketing campaign as part of new measures being taken to increase demand, especially to the new Brazilian middle class. The efforts are part of a new retail product, launched on 08-Aug-2010, which also involves the inauguration of TAM Viagens franchise offices. The carrier added that 75% of its passengers currently travel for business purposes.

GOL (-0.9%) was one of only two carriers down for the day after the carrier reported a net loss of BRL51.9 million (USD29.7 million) for 2Q2010, compared to a net profit of BRL353.7 million in the previous corresponding period. 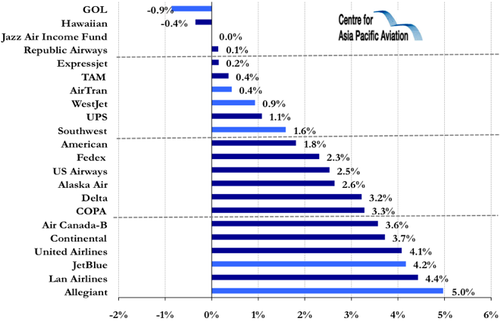