Thai Airways' shares were also up yesterday, by 2.4%, despite the carrier reporting a massive 17.7% reduction in passenger numbers and a 19.7% slump in cargo volume in Jun-2009. Load factors also suffered, slipping 9.6 ppts to 65.1%. However, investors were seemingly prepared for these extremely concerning figures. The carrier last week warned that passenger traffic from East Asian countries had fallen sharply, by 15-20%, as a result of the swine flu scare. In an attempt to counteract this weakness, the carrier has announced plans to turn its intention to the European market, with the carrier most recently launching service to Oslo.

China Airlines' shares slipped 0.8% yesterday. The carrier, and its subsidiary, Mandarin Airlines, on Friday confirmed its new schedule for cross-Strait services, which will go into effect on 31-Aug-09. The carrier is hoping to benefit significantly from cross-Strait liberalisation, which will provide the carrier with access to the large and potentially lucrative Mainland China market, both in term of passenger and air cargo demand. 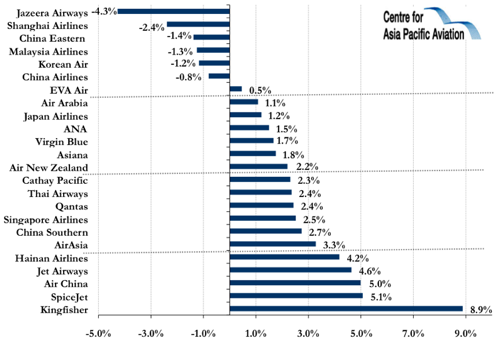