A US district judge has ruled Rolls-Royce Group must lower the amount of damages it is seeking in its patent lawsuit against Pratt & Whitney over the blade design of the Engine Alliance GP7200, which powers the A380. Rolls was seeking USD3.7 billion from Pratt & Whitney, which is a subsidiary of United Technologies Corporation.

Rolls-Royce is seeking USD1.35 billion due to lower prices from competition and USD2.3 billion in lost profit.  The judge ruled the company overstated the effect of competition on engine prices, units sold and the value of service contracts in its damages estimate. Rolls claims Pratt & Whitney’s blade design violates a 2000 patent for its own Trent 900. Both engines are used on the Airbus A380.

Pratt & Whitney re-expressed its opinion that the Rolls-Royce case is “meritless” and it intends to pursue a rigorous defence. Pratt & Whitney is pursuing a separate patent infringment case against Rolls-Royce. Shares in Rolls-Royce were just 0.1% higher yesterday.

Elsewhere, PASSUR Aerospace entered into definitive agreements to issue 2.4 million new shares of its common stock to certain accredited investors, including certain members of its board. After the placement is closed, the company’s debt will be reduced from USD14.8 million to USD4.8 million.

Bombardier shares rose 3.6%. The company confirmed it will enter an agreement with Siemens to design, develop and supply parts for up to 300 high-speed trains, with a contract value potentially exceeding USD3 billion. The agreement comes on top of an announcement last week that a consortium including Bombardier, Keolis, Downer EDI, McConnell Dowell and Plenary won a tender to build and operate a USD1.1 billion light rail system in Australia. 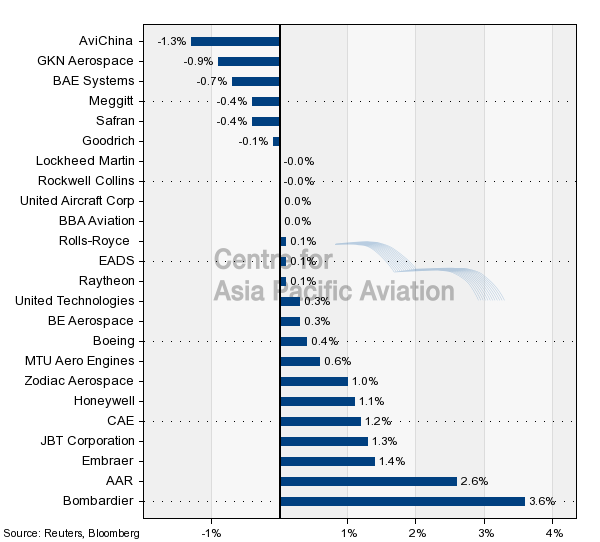