US LCCs were standout performers on 20-Oct-2010 as Wall Street recovered losses from the previous days trade after a positive outlook from the financial sector and another batch of strong corporate earnings, led by major American airlines. The S&P500 was up 1.05% for the day. JetBlue (+6.8%), Southwest (+3.7%) and AirAsia (+5.3%) were the biggest LCC gainers for the day.

Better-than-expected earnings from major US airlines boosted JetBlue (+6.8%), which rallied to a 52-week high ahead of its release of 3Q earnings today. The carrier's shares have gained more than 13% in the past month. Southwest (+3.7) was also buoyed by the positive news from the sector bouncing back from Tuesday’s losses to gain 3.7%.

Fitch Ratings in its latest 'Airline Credit Navigator' report yesterday maintained its ‘BBB’ credit rating for Southwest with a 'stable' outlook and a ‘B-‘ rating for JetBlue also with a stable outlook. Fitch stated that more than a year into the cyclical demand recovery that began to drive improved operating results late in 2009, US airlines are again poised to report solid operating and credit quality trends as 3Q2010 results roll out this month.

Shares in WestJet Airlines gained 2.9% after rising as much as 5% yesterday after the Canadian LCC entered its first interline agreement with a US carrier in an agreement that will boost its passenger numbers. On the agreement, PI Financial commented: "This is a relatively low-risk method of adding traffic to WestJet's domestic network through a marketing agreement, while opening the door to future opportunities".

Shares in Southeast Asia’s largest LCC AirAsia gained 5.3% yesterday after MIDF Research revised its full year earnings upwards by 26.9% and placed the LCC’s shares on a ‘buy’ call with a target price of MYR2.88. MIDF Research stated it was "extremely positive" on AirAsia's 2011 outlook, due to expectations of higher revenue growth. In its research note on Wednesday, MIDF Research among others, viewed the listing of Thai AirAsia and Indonesia AirAsia to be positive for the company. Citigroup also increased the carrier’s stock rating from MYR2.50 to MRY2.85.

Virgin Blue (-3.2%) slipped during the day’s trade, as the wider Australian market hit a two-week low after responding negatively to news of rate rises in China and US mortgage concerns.

Also in the Asia Pacific, shares in Skymark Airlines retreated 1.6% to JPY684 despite the Japanese LCC more than doubling its net income forecast for the 12 months ended Mar-2010 to JPY5,500 million (USD67.8 million), on the back of strong sales. 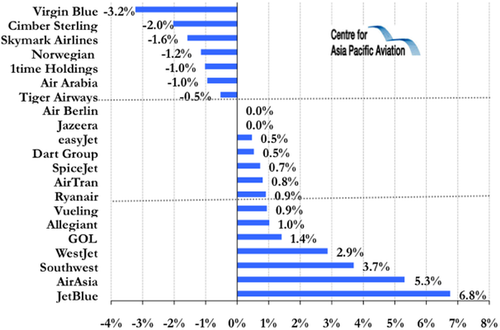