JetBlue Airways has entered a new phase of growth bent on yield, not capacity, increasingly centred around further hybridising its operation, which started out as a low-cost carrier.

JetBlue will add premium seats to its forthcoming A321s as it targets the business-heavy transcontinental market, where it reckons it can pick up demand from small/medium-sized companies wanting a premium product without paying for the service on legacy carriers. Although it is easy to see JetBlue picking up some demand, the market has become increasingly competitive with Delta deploying lie-flat beds, United re-vamping its product and American to introduce a new product with its own forthcoming A321s.

Additional revenue will be gained through JetBlue switching on in 2H2013 two-way codeshares, initially with Emirates, and its continued drive to offer high-margin ancillaries that give an added benefit rather than charge for what used to be free.

JetBlue had been coy about details of its premium product except to say it will be a sub-fleet and its forthcoming A321s will have the product, which will be a different seat than its existing economy seat; the carrier will not block off the middle seat and call the product upgraded. But an Airbus filing with the US regulator FAA sheds light, describing the product as having 16 seats, four of which are mini-suites.

The mini-suites, Airbus said, would likely have a sliding door, although the FAA currently forbids closing off a passenger compartment. The sliding element is similar to suite products operated by other carriers, including Emirates. JetBlue confirmed the "technical details" but said all details and branding would be announced later in 2013.

JetBlue's growing number of partners will have access to the premium seat, but JetBlue notes the product improvement was driven by its own revenue targets and not requests from partner airlines.

JetBlue's A321s will also feature a new economy seat. JetBlue is not targeting free upgrades to the premium product, with CEO Dave Barger saying on the sidelines of CAPA’s Airlines in Transition conference in Dublin in Apr-2013 that the product "should be priced right". 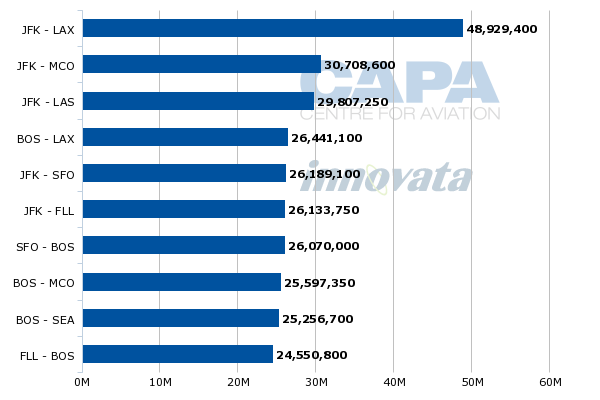 Transcontinental routes have been a focus for competitors. United last decade introduced a dedicated fleet of 757-200s for its “p.s.” premium service from New York JFK to Los Angeles and San Francisco. The three-class aircraft included first, business and economy plus (no regular economy, although economy plus was merely regular economy with additional leg room and, for a while, complimentary meals).

The premium seats were old-style recliners, which Delta one-upped by deploying lie-flat beds. American refreshed its premium product and will do so again with its forthcoming A321s that will replace the 767-200s on routes from New York JFK to Los Angeles and San Francisco. The business class product will be about the same as on its new 777-300ERs (a product also used on US Airways and Cathay Pacific). On the narrowbody A321 the new American product will have an unusually spacious 1-1 configuration.

Mr Barger says JetBlue mainly saw opportunity to attract not the larger corporate contracts but rather small and medium-sized companies as well as individual companies. This is part of the carrier’s “customer sweet spot” wedged between high-value leisure customers and “mixed wallets” that do not yet constitute heavy corporate contract passengers. 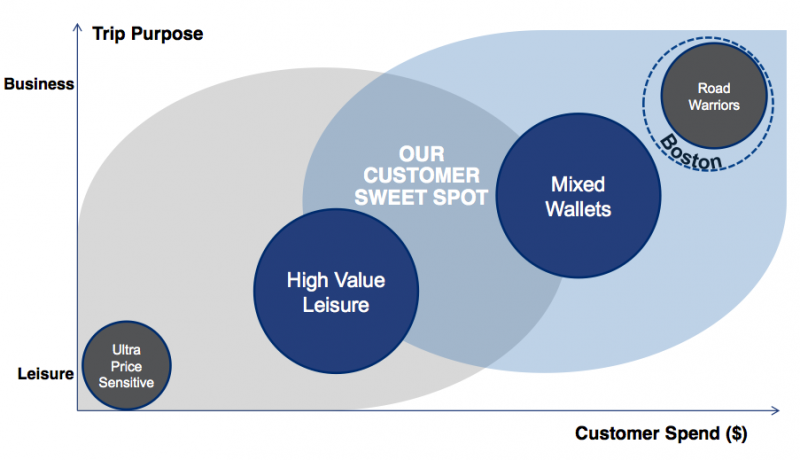 An exception is in Boston, where JetBlue has built up its presence in the city – its largest outside of New York JFK – and sees high-yielding business passengers. The Boston market could be especially attractive to JetBlue. 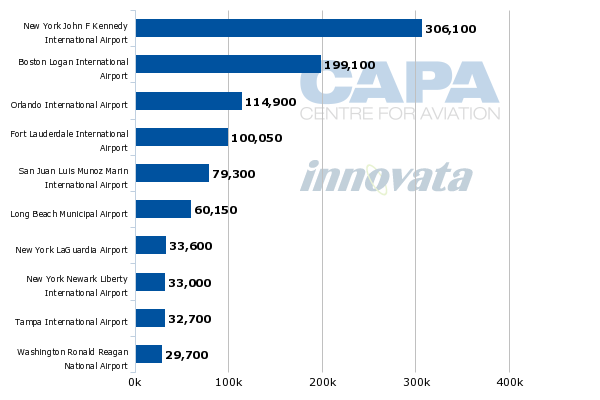 The competitive response to JetBlue’s product could be fierce

JetBlue’s entry into the premium market will not go unnoticed. Other carriers already have or are currently upgrading their product, making yield pressure in premium cabins likely. A suite-like product would likely be the most high-end seat in the transcontinental market.

United has already demonstrated how serious it takes the premium transcontinental market out of New York. In Apr-2013 Virgin America introduced new transcontinental services from United’s hub at Newark to Los Angeles and San Francisco and lowered fares in excess of 20%. This created yield pressure on United and the situation was further exacerbated by the carrier shifting capacity around its network to add frequencies out of Newark on competing routes (five round-trips to each Los Angeles and San Francisco). United’s objective was to maintain market share and add seats to woo passengers considering competitors. 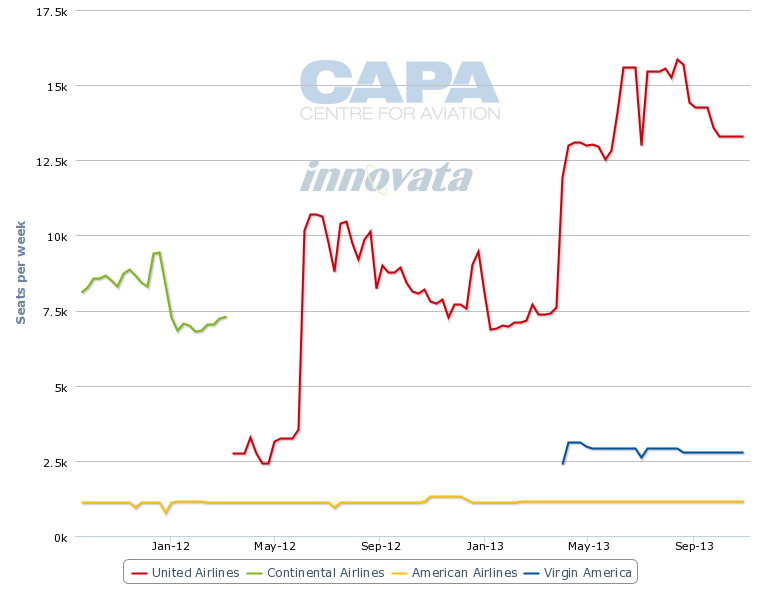 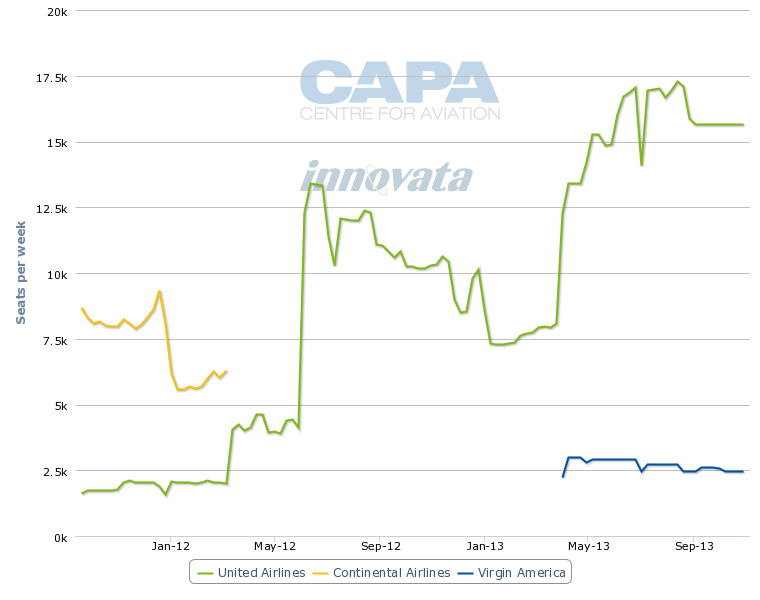 Additional revenue growth will come through JetBlue’s partnership business, which it expects to bring in about USD80 million of additional revenue in 2013 on base revenue of USD4.5 billion, meaning partnership revenue accounts for about 1.7% of total revenue. (This very roughly translates to 1-2% of JetBlue passengers connecting to other carriers.) JetBlue sees its partnership platform being in the early stages of maturity.

JetBlue’s first interline was in 2007 with small regional carrier Cape Air and has grown the business since, but saw the most rapid increase in partners in 2011 and 2012. 2011 saw the largest gain in partnership bookings (actual value is not disclosed) due to those partnerships as well as the ramping up of interlines introduced in previous years, such as Emirates and South African Airways (SAA), which did not have strong partners in New York JFK.

JetBlue’s partnerships are interlines and one-way codeshares with partner airlines coding on JetBlue services but JetBlue has not been coding on other carriers. It expects to change in 3Q2013 with its first two-way codeshare with Emirates. Mr Barger tells CAPA that SAA will likely be the second partner to carry the JetBlue code.

JetBlue will not codeshare on all of its partners. On growing partnerships, Mr Barger said: “This pipeline is going to do nothing but expand for us, the largest carrier at Kennedy Airport." 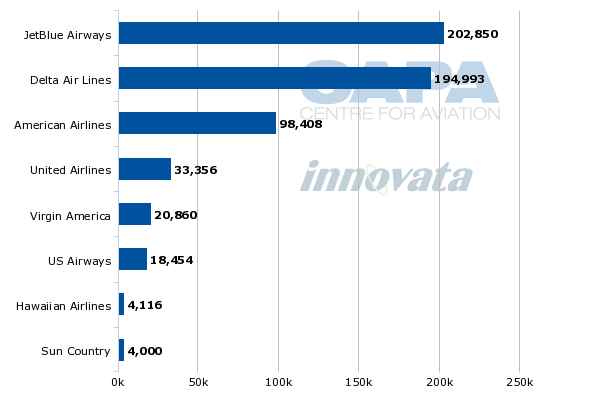 JetBlue is focusing on supporting transfers at key cities only rather than the legacy model of transferring across the system. JetBlue’s hub at JFK’s T5 is ideal as the carrier is the major operator located in the terminal.

Aer Lingus, which was JetBlue's second partner after Cape Air, moved to T5 from T4 while Hawaiian launched its JFK service into T5. Terminal alignment means connecting times are reduced and already JetBlue has noticed an increase in Aer Lingus partner bookings since the terminal move. 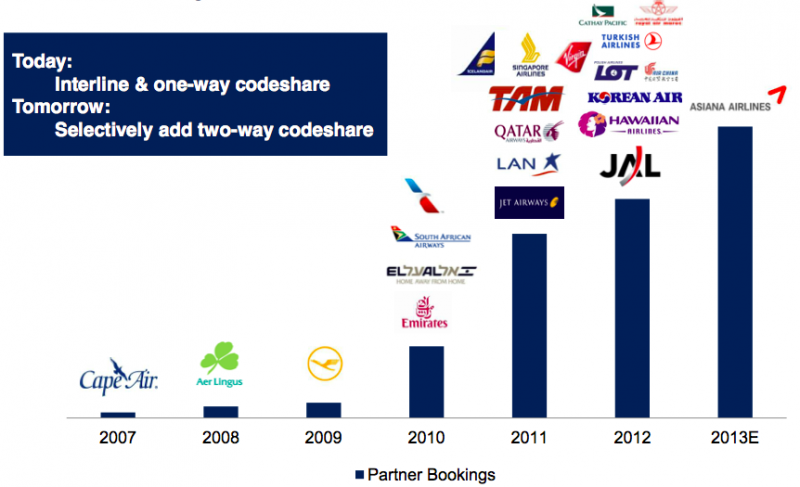 More partner bookings also translates to a more robust loyalty programme (TrueBlue) for JetBlue. JetBlue has given indications of revenue growth (with baseline figure) of various types of passengers, ranging from those who are not members of TrueBlue to those with a TrueBlue credit card and finally TrueBlue’s elite members who belong to the carrier’s “Mosaic” level. Partner points increase dramatically from members without a TrueBlue credit card and those with a credit card.

JetBlue annual value per type of customer (no base figure supplied): 2013 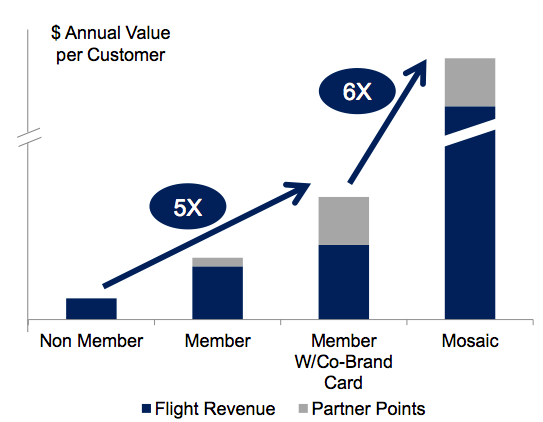 The world of ancillary revenue can broadly be defined, in CAPA’s view, to three categories: friendly, neutral and ugly. Friendly ancillaries are those where passengers pay a fee to receive something extra that improves the passenger experience, such as WiFi or an enhanced meal. Ugly ancillaries charge for what used to be free, notably checked luggage, so passengers pay more but receive the same. Neutral ancillaries are based on need, such as duty free.

It offers two “Even More” ancillaries: Even More Speed, which allows for priority passenger screening and boarding, and Even More Space, which gives access to the seats at the front of JetBlue’s aircraft that have more legroom than those in the rear. Even More Speed has minimal establishment costs and low ongoing costs while Even More Room took advantage of the existing cabin configuration; seats were not taken out.

These high-margin ancillaries go nearly straight to the carrier’s bottom line. The Even More offerings generated USD150 million of revenue in 2012, a tidy sum but low compared to the USD440 million the carrier brought in through other ancillary streams, mainly its TrueBlue programme and affiliated credit card. 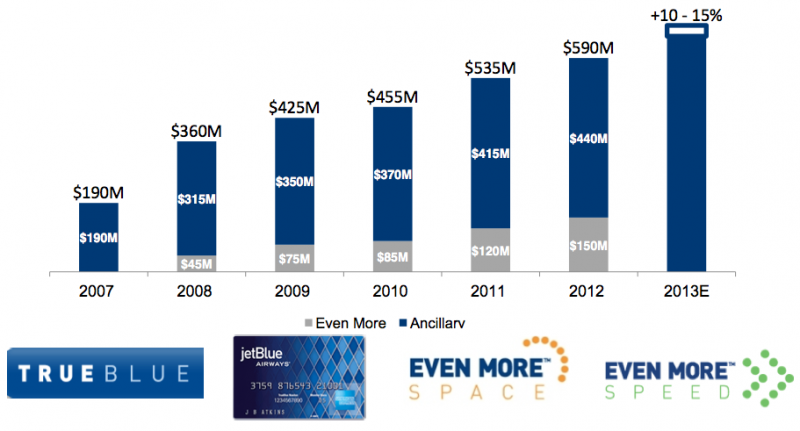 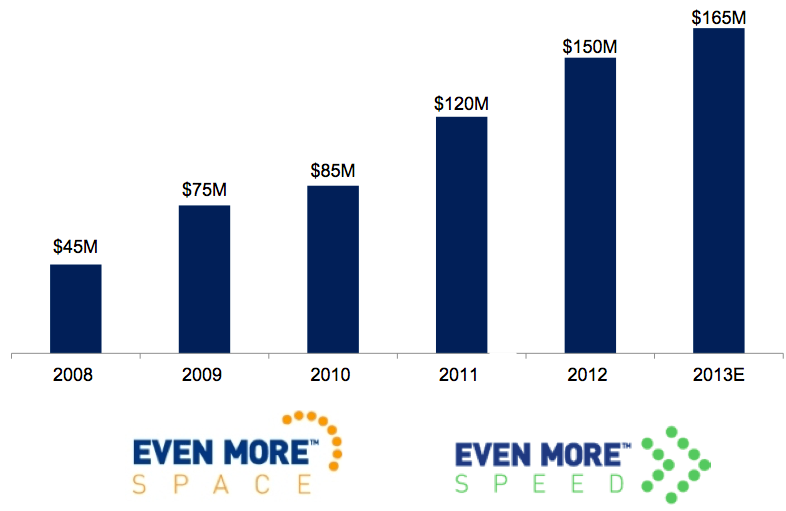 This is more a reflection of the power of the loyalty programme and tying it to credit cards than it is a weak on-board/at-airport ancillary offering. Its Even More offerings hit the revenue sweet spot of being high revenue generators and improving passenger satisfaction, which JetBlue measures through the net promoter score (NPS).

WiFi also ranks high on the NPS scale but has a lower revenue contribution. Service fees and charging for the first checked bag (which JetBlue does not do) are high revenue generators with a low NPS. 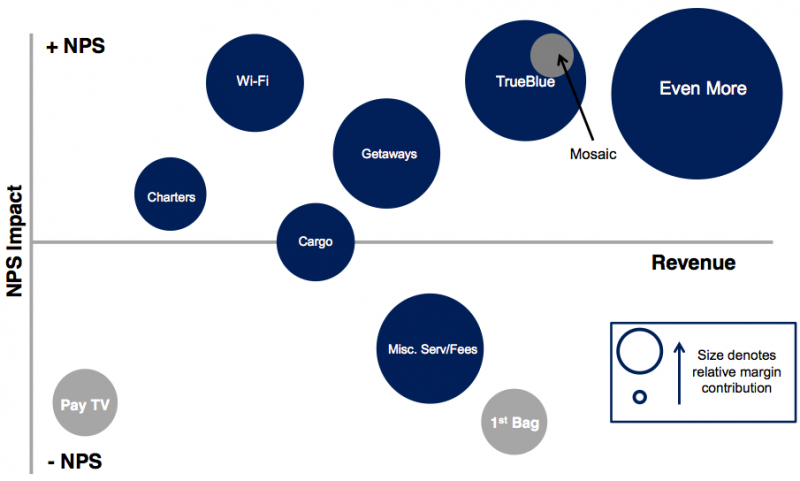 Mr Barger appeared on a panel at the CAPA Airlines in Transition conference in Apr-2013 with Vueling CEO Alex Cruz. There are many similarities between their businesses. Also in the hybrid airline space, Vueling is due to introduce its own premium product, replacing an offering in which the middle seat on narrowbodies was blocked.

Mr Barger was taken back to learn Vueling’s A320s have 180 seats (two are blocked for business passengers) whereas JetBlue’s A320s have 150. But he does not believe JetBlue should increase seating density. Increasing seats beyond 150 would see a jump in costs as an additional flight attendant would be required under FAA regulations.

Adding seats would also mean a possible infringement on its Even More Space offering that could see a revenue decrease. The ancillary is high-margin while the core seat is not.

Outlook: more gains as the hybridity becomes complex – long-haul next?

JetBlue is smartly pursuing yields even if it means additional cost, as interlines, codeshares and premium seats bring. But so long as the yield uptick outweighs costs, the effort is worthwhile, even if some are slow to understand what exact type of carrier you are.

JetBlue started effectively as a hybrid carrier and in more recent years has increased its hybridity. It would not be unsurprising for the carrier to continue this path and keep embarking on new and higher levels of development.

Widebody operations, which would allow it to expand its successful operation to Latin America, are not out of the frame. A range of partnerships, a loyalty programme delivering handsome returns and soon a premium product will position JetBlue well to open up whatever opportunities appear in future.