Airlines in Transition part 4: Bridging the gap between full service and low-cost or hybrid airlines

Our previous report on CAPA’s Airlines in Transition conference (Airlines in Transition part 3: How full service airlines are reshaping models to be more competitive) looked at how full service carriers are responding to the challenges of a weak global economy, high fuel prices and growing competition from LCCs on short-haul and Gulf carriers on long-haul. The low-cost sector is also going through a period of change, characterised by features summarised at the conference by Professor Rigas Doganis.

Like the FSCs, the LCC sector has seen concentration and consolidation and the two sectors have established a growing number of linkages. Moreover, the relaxation of the pure low-cost model of simplicity and the adoption by FSCs of LCC pricing strategies has narrowed the differences between them. Have the differences been eliminated? What are the challenges faced by LCCs/hybrids? What is the right number of fares to offer? We examine these questions and more in this fourth conference report.

Trend to concentration and consolidation

The trend towards concentration and consolidation among LCCs has taken more than one form. There have been outright mergers, for example Southwest/AirTran and Vueling/Clickair, and cross-border joint ventures.

In the latter case, a major LCC has a minority stake, but management control, in another LCC. Examples include the AirAsia-branded group (AirAsia has 49% of AirAsia Japan, Indonesia AirAsia, Thai AirAsia, and 40% of AirAsia Philippines) and Jetstar.

Links between LCCs and network majors have taken a number of forms. Delta’s acquisition of a 3% stake in Brazilian LCC Gol in Dec-2011 cemented a relationship that began with the two carriers codesharing.

Virgin Australia and Etihad commenced a partnership in 2011, whereby Virgin Australia feeds the Abu Dhabi hub of the UAE’s national carrier. WestJet interlines with Delta and British Airways and codeshares with American Airlines and JAL. JetBlue is 19% owned by, and codeshares with, Lufthansa and also interlines with carriers such as American and Etihad.

Air France is expanding the network and fleet of Transavia and IAG established Iberia Express to feed Iberia’s Madrid hub. Iberia Express does not categorise itself as an LCC, but it is lower cost than Iberia. airberlin, no longer classified as an LCC, further demonstrated its abandonment of the LCC label by joining oneworld and selling 29% of its shares to Etihad in 2012.

The relaxation of low-cost model simplicity means that a number of carriers still broadly recognised as LCCs display product features that were not previously associated with the pure LCC model. These include the use of GDS and/or travel agents, the adoption of allocated seating, FFPs and the inclusion of transfer traffic, long-haul and codeshares in the business model. 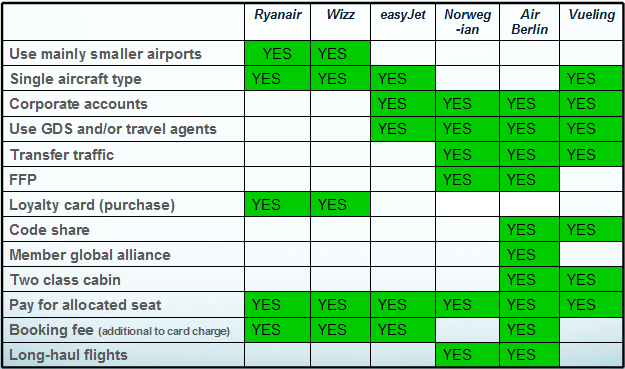 The adoption by LCCs of FSC pricing strategies is designed to maximise revenues by segmenting customers according to their willingness to pay. In an example given by Professor Doganis, on 31-Jan-2013 Air Canada quoted eight different fares for a flight from Montreal to Vancouver on 4-Mar-2013, ranging from USD304 to USD3,108. Prices were different again on other days of the week.

The product features offered with each of the fares vary, in an 'a la carte' pricing approach. This approach raises the question of whether some FSCs have gone too far in adopting unbundled pricing and are risking confusing customers? In general, the LCC approach is to vary fares over time, but to offer one fare at any one time.

As in the previous conference session moderated by Professor Doganis, after setting out his analysis, he posed a number of questions to CAPA’s panellists. These questions were supplemented by questions from conference delegates.

Are the changes taking place in the product/service features of both LCCs and FSCs effectively eliminating any fundamental differences in the two sectors of the industry?

In the view of Vueling CEO Alex Cruz, there is some convergence between FSCs, who need to lower their costs and remove some fares, and LCCs, who need to upgrade their products and services. However, he sees this as temporary, saying that Vueling is “re-writing” the product so that it will be better than that offered by the traditional FSCs.

Mr Cruz argues that it is possible to achieve better revenues at minimal cost and thereby to generate a sufficient return on capital: “You need determination to introduce frills without affecting the cost base”. 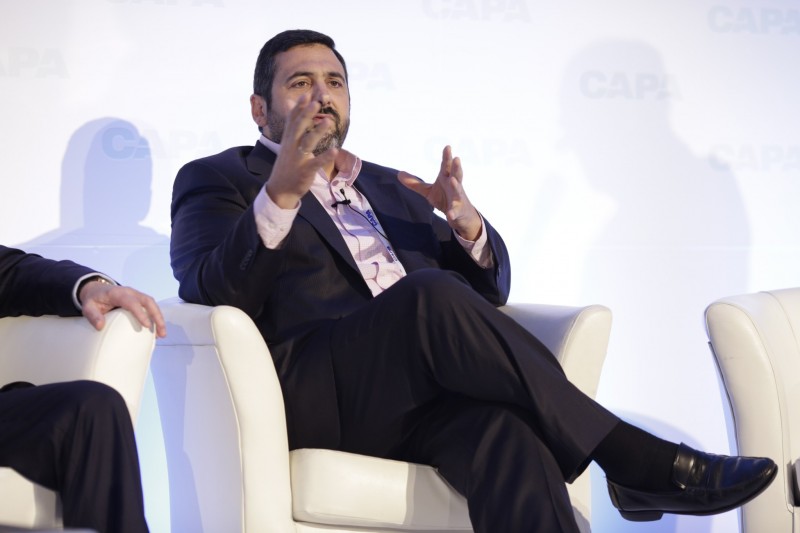 Dave Barger, CEO of JetBlue, describes his airline as “higher frills, lower cost, not one or the other”. Its New York hub means that it has a higher cost structure, but he sees JetBlue as being in the “sweet spot” between the two models: “It starts with the consumer – what do they want?”. For example, the airline plans to introduce a premium cabin in some aircraft.

With consolidation leading to the right sizing of the number of players, Mr Barger believes there is plenty of room for a third model offering a high value proposition at a lower cost. This includes features such as interline traffic, although this is not its core business and 86% of JetBlue’s traffic is point-to-point. The carrier had USD80 million of combination traffic in 2012, of which half may have been incremental and half may have flown with JetBlue anyway.

FSCs admire the marketing savvy of JetBlue, said Greg Gilchrist, chief customer officer at Sabre Airline Solutions. He noted that JetBlue is looking to expand its reach through partnerships with FSCs and technology helps both. “Technology plays a very specific role, especially as business models change,” he said, adding that “airlines led the world in communications protocols and standards within the industry”.

Tony Davis, a partner at Irelandia Investments and former CEO of Tiger Airways, takes a more purist LCC view. He has significant experience in emerging markets, where the competition is often bus companies and where disposable income levels are low. While he believes that it is dangerous to generalise and that different strategies work in different markets, he is convinced that “adding costs to generate revenues is risky”.

What are some of the strategic and technology challenges LCCs/hybrids face as they compete with each other and in the FSCs’ markets?

JetBlue’s Mr Barger identifies geography, price and cost structure as the essential requirements. The ability to deal with change is also important.

JetBlue was a launch customer for the Embraer 190 in 2003, adding to its fleet of A320 aircraft. The airline had difficulties in coping with the additional aircraft type at the time as it was “too young”. However, Mr Barger believes that “having them now helps our position at Boston. We need a 100 seat platform for business markets from Logan”.

For Vueling, the challenges are different depending on which model it is competing against. According to Mr Cruz, “we need a fare advantage, and so a cost advantage, against the full service carriers. Against other LCCs, we need a product advantage. We have zero cost frills ready to be implemented”. For example, he cited Vueling’s frequent flyer programme and one row of business class seats. Vueling has some geographical advantage, but needs scale and the focus is on cost.

Mr Davis argued that the LCCs’ innovations have been copied and this has led, for example, to lower distribution costs and the introduction of catering charges. Making the assumption that fuel and labour costs will continue to rise over time, he said “you shouldn’t add to controllable costs” such as distribution and marketing. The LCC approach to fleet, with a single aircraft type, has influenced FSCs to focus on families of fewer types.

Challenged by a question from a delegate on how to know what the consumer wants, CAPA’s panellists had some different views. Mr Barger and Mr Cruz both use surveys to canvass customer opinions and tastes. JetBlue achieves a 12% return rate for its surveys and this tool has led to the decision to introduce the new premium cabin. Mr Cruz said that Vueling has learnt much from JetBlue and that, in addition to surveys, his airline carries out product testing. Mr Barger also believes in a “try and see” approach and cited JetBlue’s route to Colombia as an example.

Mr Davis’ approach to what consumers want is to focus on the very basic ingredients: a cheap fare, arriving on time and with their bags. In markets such as Mexico, where Irelandia is a shareholder in LCC VivaAerobus, there are two billion passengers per annum taking buses, and so what consumers need is clear: a lower fare and a shorter journey time. Beyond that, he argues, it is dangerous to second guess: “Consumers always want more than they are willing to pay for”. 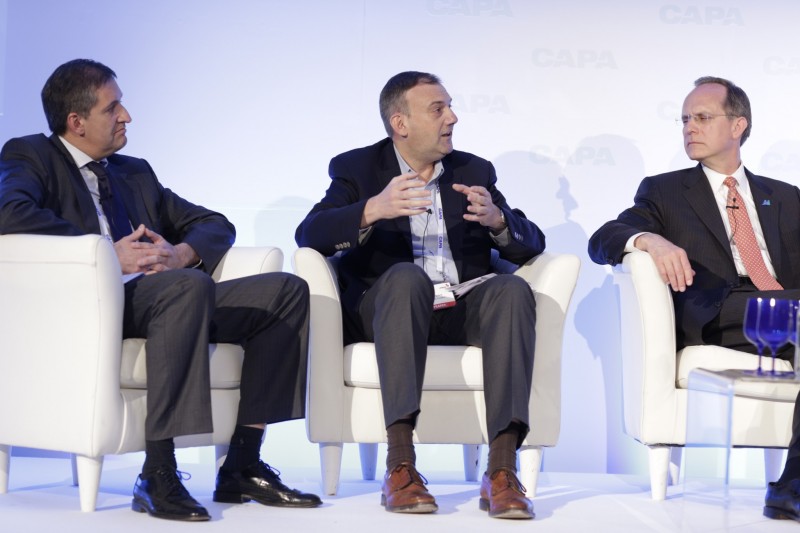 Will the industry move further towards self-service?

To achieve self-service, Michael Eggenschwiller, CEO of Hamburg Airport, emphasised the importance of automation in processes such as check-in and security. Airports need to test new processes for passenger acceptance and for their associated costs.

Reducing full service check-in improves the cost efficiency of the process, but raises questions concerning unused airport space and the lead time passengers need for check-in. Sabre’s Mr Gilchrist pointed out that full self-service requires the adaptation of technology and a number of business processes. Some airport lay-outs will make it harder than others, but, ultimately, it is not for the airports to drive and control such a change.

Mr Cruz sees a need for far fewer people staffing the airports of the future if all processes can be automated. For example, passengers would leave their bags at a machine and walk through security, which would have passenger recognition technology. In this vision, check-in kiosks would not be needed. Returning to more immediate requirements for making self-service work, Mr Davis argued that full unbundling of airport charges is necessary.

How many different fares are available at one time for the same flight?

Vueling offers three options: a basic economy fare, an upgraded economy fare with some additional frills and a business class fare. Mr Cruz said that having two fares in economy gives Vueling a revenue uplift over having just one, noting that the upgraded fare comes with a low capital cost to the airline and no additional revenue management cost. The approach is to have a low price available, but to offer additional features that can attract a premium without adding cost and complexity.

JetBlue has two options: a refundable and a non-refundable fare (there is no refundable option if booking for the following day). VivaAerobus takes the purist LCC approach and offers just one fare, the price being determined by the date of booking relative to the date of the flight.

What are your key challenges?

Asked what were their key challenges, the panellists revealed a range of issues. Hamburg’s Mr Eggenschwiller’s concerns are taxes, noise restrictions and operating hours, while Sabre’s Mr Gilchrist identified satisfying the huge demand for technology.

For Mr Barger, protecting JetBlue’s culture while handling 1,000 new recruits over the next 15 months is a big challenge, alongside more immediate issues such as the new A321 fleet and the new premium product. Mr Davis is concerned about airport charges in Mexico and managing controllable costs.

Vueling’s Mr Cruz perhaps sums up the situation for all airlines, whatever their business model, when he said that Vueling’s key challenge is to improve its margin by lowering unit costs and improving unit revenues.