Japan’s inbound tourism continues to expand rapidly, and the government has further growth targets. This may appear to be ideal for Japan’s growing LCC sector.

Japan’s LCCs are expanding internationally, although in recent times they have been maintaining balance with domestic flying. Peach is Japan’s largest international LCC and is nearly twice the size of the second largest, Vanilla Air, with which it will merge. Yet the largest LCC serving Japan is actually a foreign one: Jeju Air.

International flying represents growth for Japan’s LCCs, but there are significant challenges. Even though Japanese LCCs are low cost, they are medium and high cost compared to airlines from other countries – even full service Chinese airlines. Foreign airlines hold a geographical advantage for serving Japan’s large network of underexploited secondary cities.

Peach Aviation has Japan’s largest homegrown LCC footprint measured in absolute size. In terms of balance between domestic and international, Peach and Vanilla have a matching proportion of their capacity in the international market.

Peach began international services in the same year as it launched (2012), whereas Jetstar Japan also began its domestic services in 2012 but did not fly internationally until 2015. The 2015 timeframe represents a delay due to regulatory challenges, but Jetstar Japan always expected that its main opportunity was in the domestic market, where its part-owner JAL is smaller than ANA, which invested in Peach. In contrast, Peach believed that its main opportunity was in the international market. 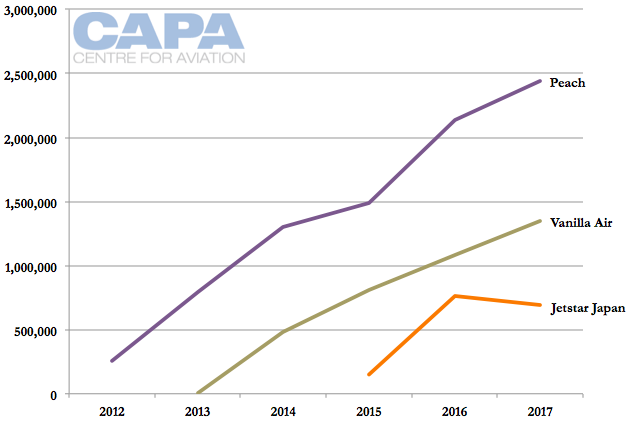 In recent years the LCCs have slowed their rate of international expansion.

Since 2016, approximately 88% of Jetstar Japan's scheduled capacity has gone into the domestic market. In 2016 Vanilla Air was nearly balanced between domestic and international as 51% of its capacity was in the domestic market. This period included a fifth freedom Taipei-Ho Chi Minh service that proved unsustainable. Through wise rebalancing, domestic accounts for 58% of capacity in 9M2018. 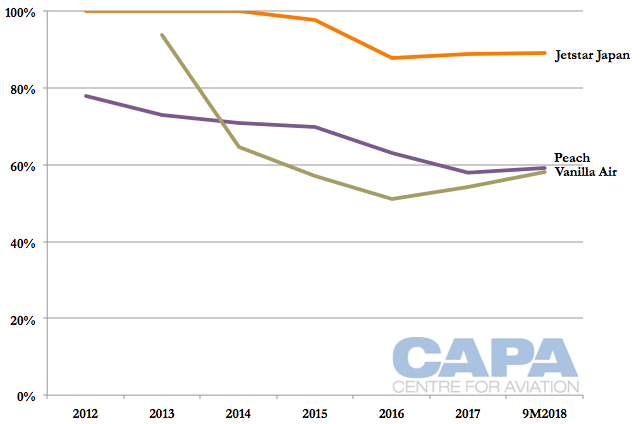 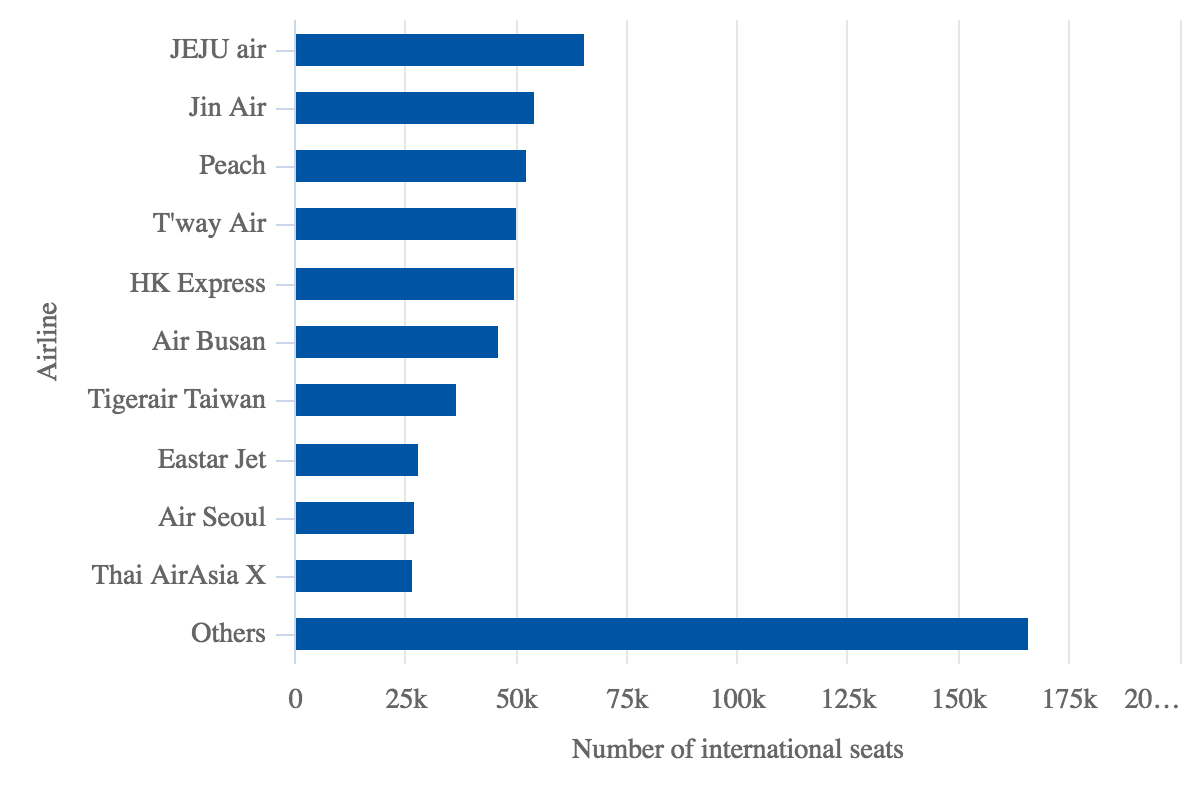 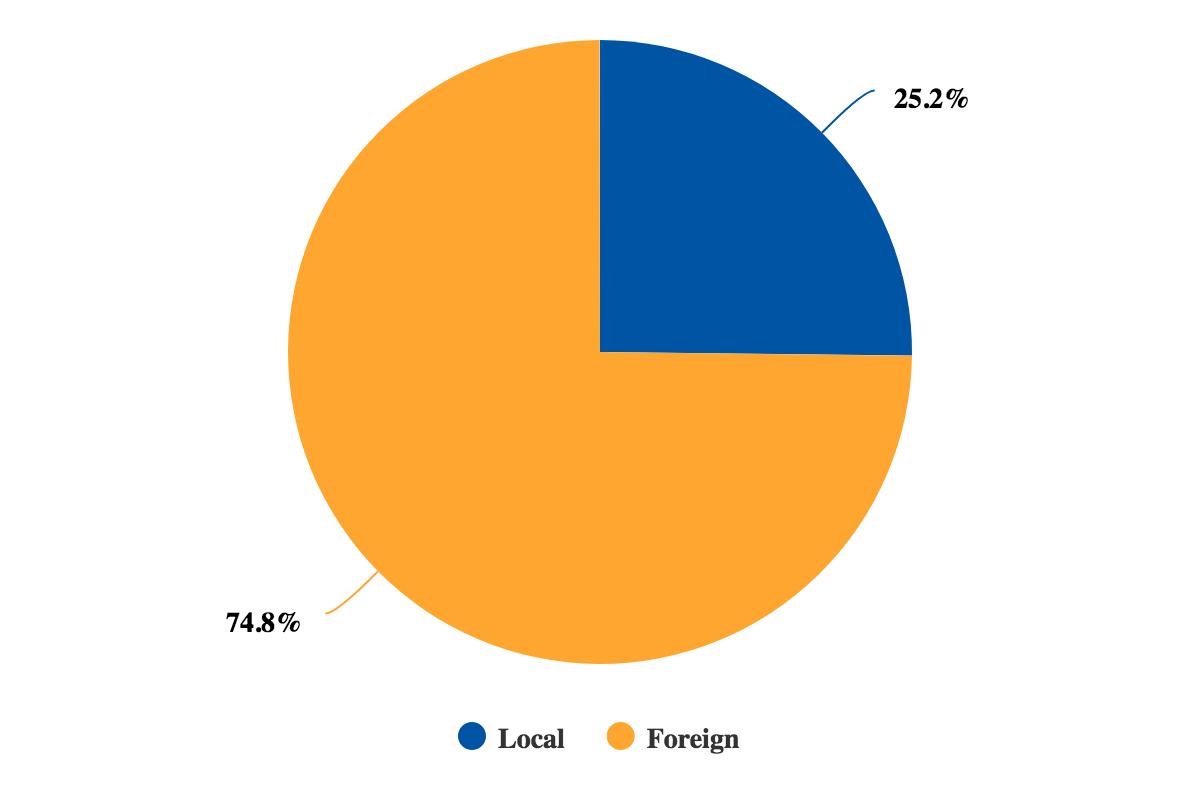 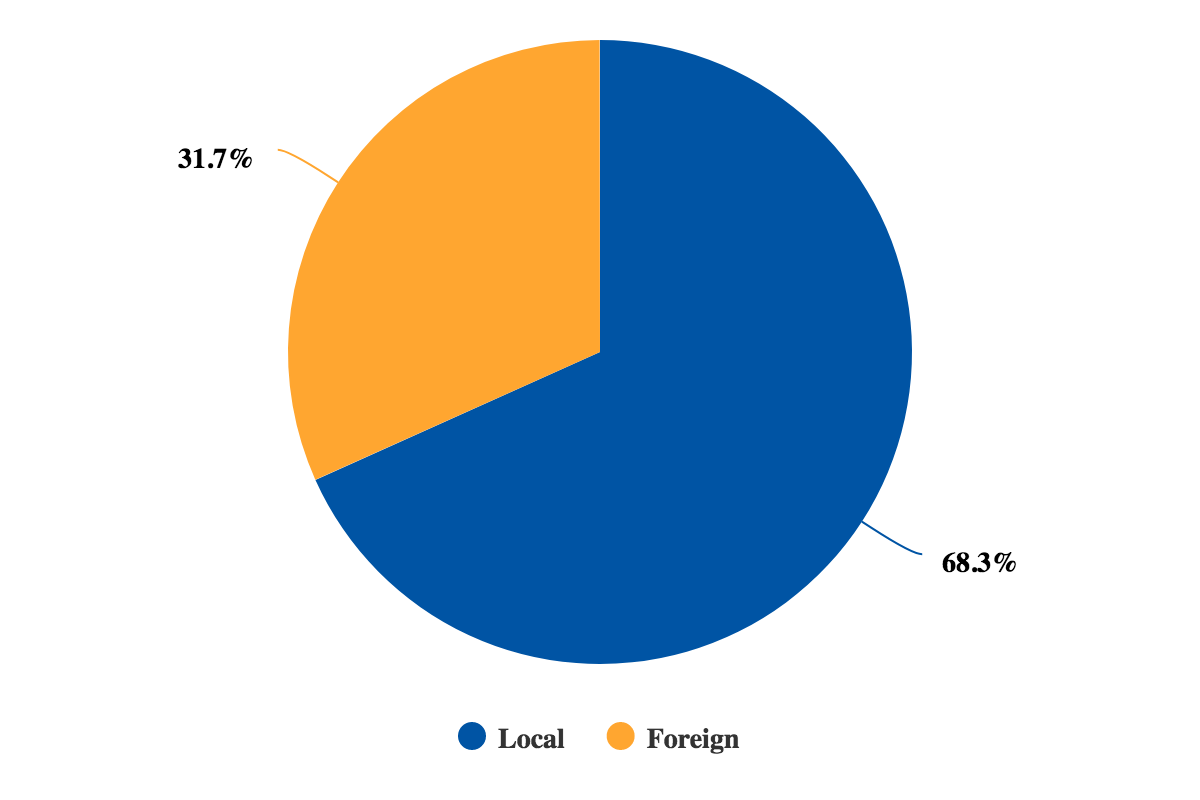 Japan’s inbound tourism is booming, and the government has set aggressive growth targets. This may seem like ideal conditions for growth, but although it is an advantage, Japanese LCCs have structural disadvantages when flying internationally. Inbound visitors to Japan are a larger growth market than outbound Japanese travel.

Financially, Japanese cost bases are undeniably high. A Japanese LCC cost base can be comparable to a full service airline from China, which is Japan’s largest source of foreign visitors.

Geographically, Japanese LCCs are disadvantaged in linking Japan’s secondary cities with foreign cities. It is these secondary cities that have high growth opportunity due to underpenetration and availability of slots. Foreign LCCs are well placed to fly from their major home city to a smaller Japanese city, turn around, and return home. Japanese LCCs will have some smaller bases, but adding international operations will introduce complexity and cost.

Taiwan is the largest market for Japan’s LCCs

Given the large presence of Korea's LCCs in Japan, it is unsurprising that Japanese LCCs do not have an overwhelming focus on Korea. The Korean LCCs served the market first, they have a lower cost base, they are the home carriers of the larger market (there are more Koreans travelling to Japan than Japanese travelling to Korea), and they have an advantage serving smaller Japanese cities.

Peach's largest market is Taiwan. Taiwan has an even stronger cost advantage compared to Japan than Korea has ahead of Japan. But Taiwan's later and smaller LCC development has created room for Peach, Jetstar Japan and Vanilla Air. Jetstar Japan's three largest international markets are served equally. Taiwan is the largest market for Vanilla Air. 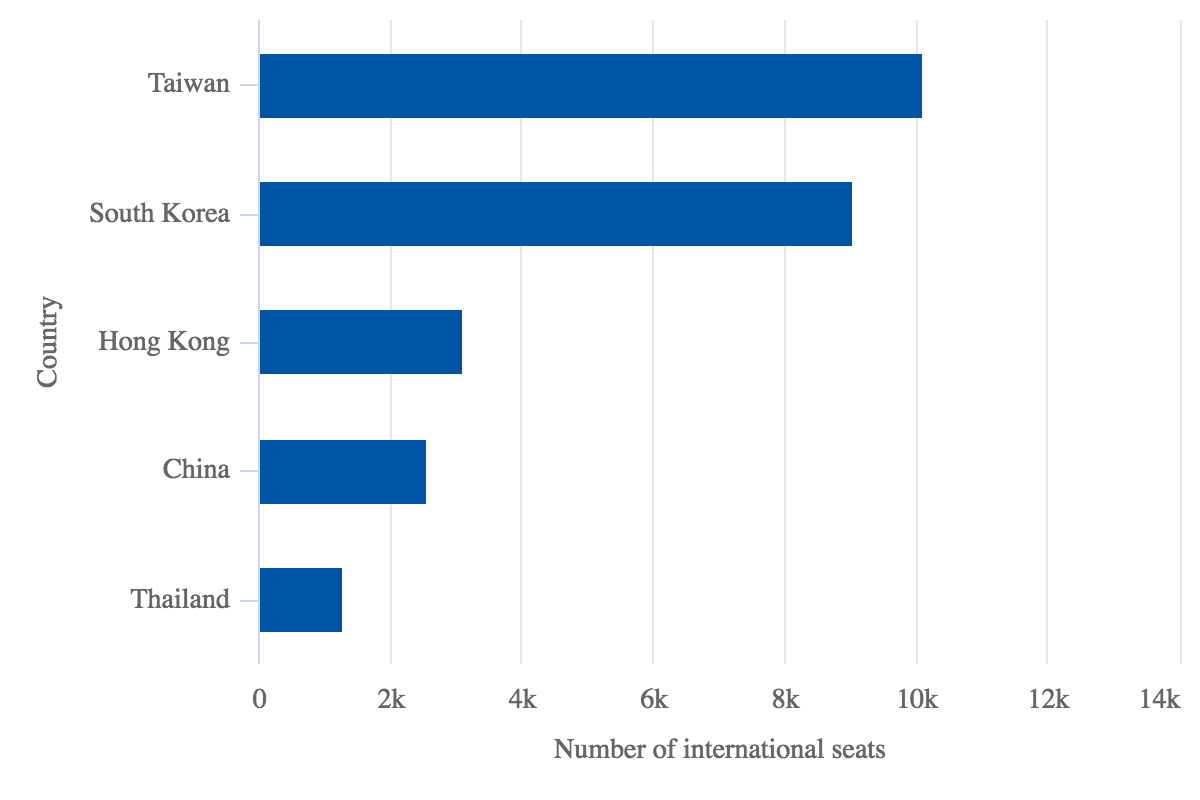 At Vanilla Air Taiwan dominates the international footprint, since it accounts for 80% of international seat capacity. Hong Kong and the Philippines hold the balance. 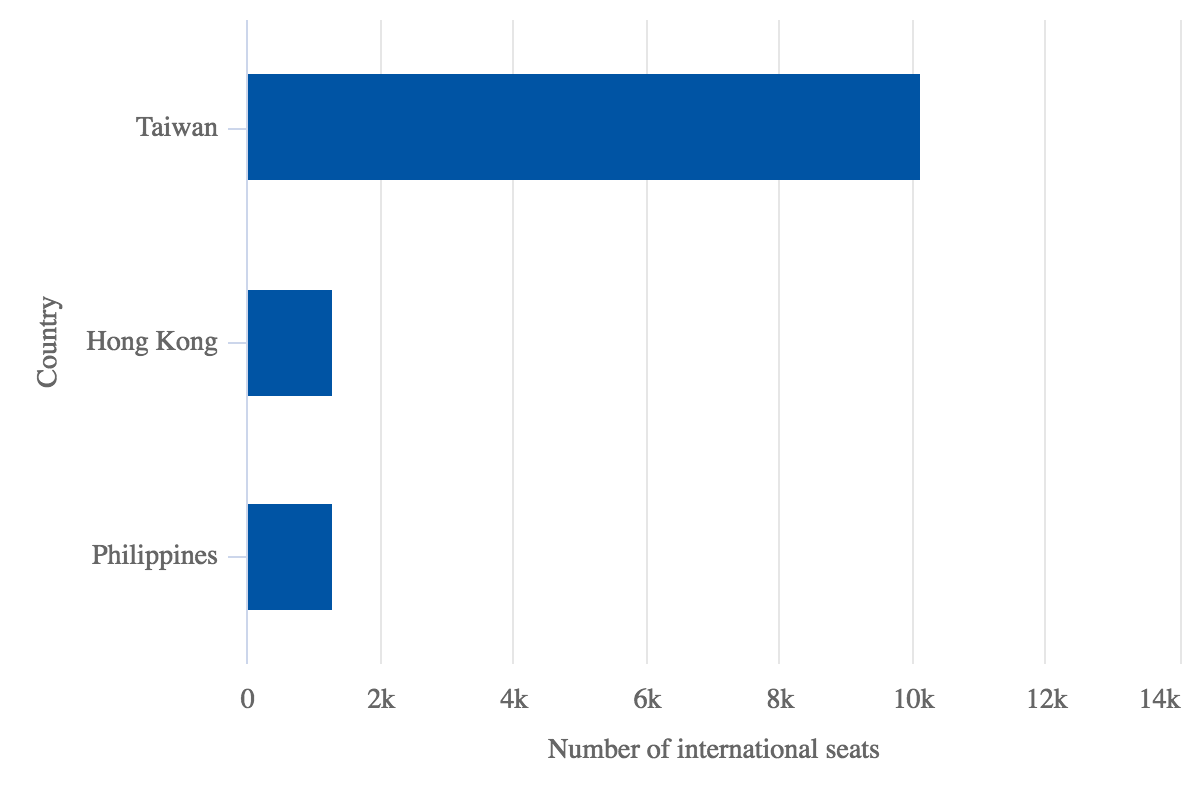 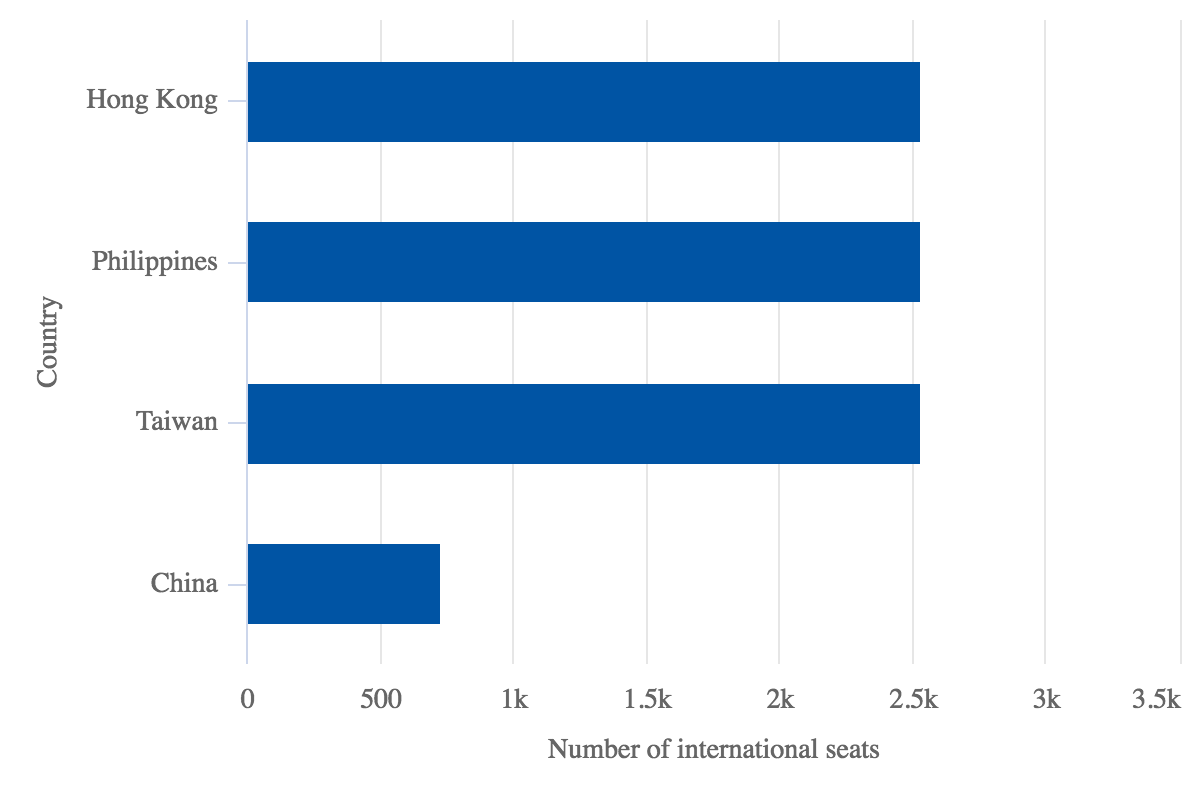 Japanese LCC growth is challenged by Japan's high costs. Geography does not easily allow expansion further into Asia on the A320 platform.

Peach has been able to serve Bangkok by flying from Okinawa Naha in Japan's south, and is planning to reach further into Asia by using long range narrowbody aircraft such as the A321neoLR, including services from Japan's main cities (which are north of Okinawa). In contrast, Korean LCCs can reach further into Asia due to Seoul's geography.

Peach's A321neoLR development may point to the future for the region's international LCC growth. While intra-Northeast Asia markets have unmet demand, infrastructure, traffic rights and other political issues are precluding growth.