Japan Airlines sitting on a wonderful opportunity. So is Cathay. It’s not one world any more

Japan Airlines’ shares may be virtually worthless, as equity investors flee from uncertainty facing the airline and an expected bankruptcy filing, but strategic investors, in the form of US airlines, their alliance and funding partners are scrambling to invest. It is a curious state of affairs, that a seemingly worthless proposition from the point of view of one investment community has such appeal to another.

Two key facts that are continually overlooked in media and analytical coverage of Japan Airlines are:

Tokyo’s capacity-constrained Narita is still a key hub and Haneda will also return to that role soon. And, for US airlines, the bilateral access rights available for regional services are unparalleled in international aviation (helping explain the US airlines’ keenness to lead the charge).

Japan’s numerical dominance has been eroded by the country’s economic stagnation for the past 20 years, as well as high fares and protectionist access arrangements – although this helps keep average yields much higher than most of its neighbours.

These factors have suppressed Japan’s true market potential by as much as 30%. Just the absence of an active low cost airline industry, for example, accounts for the suppression of travel by tens of millions of passengers annually (although this expansion is also limited by China’s unnecessarily protective policy on short-haul regional routes). 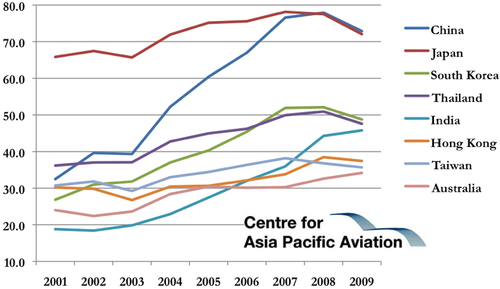 Crucially, JAL still controls around 14% of the Japanese total international capacity (or 10 million seats last year), with traffic concentrated at the Tokyo area hubs, giving it a heavy traffic bias towards premium traffic.

The current JAL platform is clearly broken – a hopelessly outdated business model thanks to years of government coddling.

But at its core, JAL still offers considerable value as an entrée into Asia’s second largest international market. Hence the clamour of interest from the global alliances, even as equity investors flee for the exits.

As The Centre has noted previously, Cathay Pacific’s voice has been muted in the oneworld clamour to consolidate the alliance’s Japan role. The Hong Kong carrier has good reason to keep its voice down. It does not wish to rock the boat in its alliance with Air China (and Beijing), especially when the next few years promise to see China’s market surge ahead of Japan’s. Nor does Cathay want to deflect the spotlight away from its own best interests at its Hong Kong hub.

This indicator does not augur well for oneworld in the global market of the future. Within a decade, liberalisation and economic expansion will propel North Asia into world leadership.

And, if airlines – and alliances – are not able to have a foot firmly planted on the bottom of that ladder, they risk being absent from the glorious upside. Right now, JAL offers a real step in the right direction for foreign airlines. It won’t be the last, but it is the best on offer at present.

Star Alliance currently dominates the scene and both SkyTeam and oneworld need leverage in North Asia. Losing not only JAL, but possibly Cathay Pacific too is not a place oneworld wants to be.