Japan Airlines' shares soared 8.0% yesterday, the largest single day jump in 11 months to become the top performing stock on the benchmark Nikkei average (which fell 2.3% yesterday), on news that American Airlines and Delta Air Lines are considering rival investments in the struggling carrier to secure partnership ties and boost revenue from Asia.

Jet Airways was the only major carrier to report a decline in passenger numbers (-3.1% year-on-year) - and worse is expected this month following the five-day pilot strike. Also losing market share last month was Air India and JetLite.

According to the DGCA, all carriers experienced higher load factor in the month. However, yields remain are under considerable pressure in India.

Cathay Pacific shares slipped 1.2% yesterday, upon the release of the carrier’s Aug-2009 results. During the month, Cathay experienced a 3.8% increase in passenger numbers to 22 million, with load factors also improving, up 5.7 ppts to 84.1%, with the carrier stating it has seen a “strong recovery in pent-up regional demand for the month with an abating H1N1 impact”. 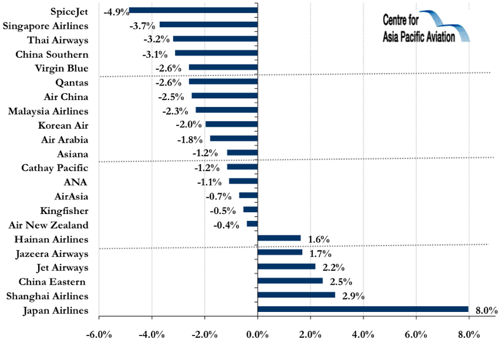