With market changing airline partnerships occurring, major new entrants arriving and the prospect of genuine reforms following an historic general election, FY2015 in India promises to be no less eventful than any over the past decade.

CAPA will release its annual India Aviation Outlook on 15-Jul-2014, covering the financial year to 31-Mar-2015. It promises to be as interesting – and turbulent – as ever, with new entrants AirAsia India, Tata-SIA, a new look Jet Airways with Etihad, Air India in Star Alliance and a probable IPO by IndiGo late in 2014.

In one of the world's most complex and challenging emerging markets, CAPA's India Outlook has become an invaluable reference tool. This brief review looks at some of the major financial issues facing India’s airlines.

In the 12 months ended 31-Mar-2014 domestic traffic in India increased by 5.2%. We expect marginally higher growth in FY2015 in the range of 6-8% year-on-year with a greater likelihood toward the lower end of that range. There may be a further downward impact on this projection should there be a sharp increase in oil prices due to instability in the Middle East.

International traffic growth, which increased 8.3% last year, is expected to strengthen to around 10% in FY2015.

Abolition of the five year/20 aircraft rule, which would permit AirAsia India, GoAir and Tata-SIA to launch international services, could deliver some further upside to this projection, although the greater impact will be felt in FY2016 as they ramp up services. 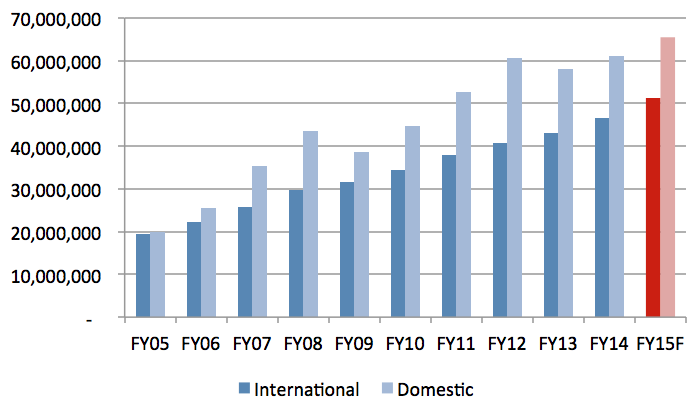 Domestic capacity is expected to expand by around 8-10%, somewhat higher than the projected growth in traffic. Most of this will be generated by AirAsia India, Tata-SIA, and possibly Air Costa, the three of which combined could deploy up to 18-20 aircraft in the market by the end of FY2015. Much is dependent upon AirAsia India’s rate of expansion, which is currently uncertain.

Jet Airways is likely to freeze its domestic fleet expansion this year and most of the seven 737s that it has scheduled for delivery will be deployed on international routes. However, the carrier will see some increase in domestic capacity as a result of the reconfiguration of its narrowbody fleet which will reduce the size of the business class cabin on a number of aircraft, thereby increasing total seats on board.

Air India does not have any outstanding orders for domestic aircraft. However Air India is seeking to lease up to 40 aircraft, of which 32 (20 A320s and 12 ATRs) would be for domestic services. Given the current financial situation of the carrier the government is unlikely to approve this plan, however it may be possible for Air India to lease up to five A320s in all-economy configuration although CAPA remains uncertain about this.

Meanwhile SpiceJet is expected to see a contraction of its domestic operations as the carrier engages in a restructuring of its business to address its serious financial situation.

On the international front, Jet Airways is expected to deploy seven additional 737s, primarily connecting Indian cities with Abu Dhabi to support the integrated network with Etihad. The carrier is expected to achieve growth of 10-15% in international traffic in FY2015.

The likelihood of meeting the upper end of this range depends upon whether India is able to restore its Category 1 status with the FAA which would enable Jet to launch its planned new services to the US via Abu Dhabi.

IndiGo and SpiceJet are expected to pursue only moderate international expansion. Air India's international growth will also be measured as it is due to take delivery of just two to three additional 787s in FY2015.

CAPA India Aviation Outlook Report will include an airline-by-airline assessment of their fleet and network expansion plans in FY2015.

Indian airlines expected to post losses of USD1.3-1.4 billion in FY2015, down from a USD1.7 billion loss last year

Over the last seven years Indian airlines have lost approximately USD10.6 billion, and the red ink is expected to continue. After posting a combined industry loss of approximately USD1.7 billion in FY2014, CAPA estimates that there will only be a slight improvement in FY2015, with projected losses in the range of USD1.3-1.4 billion. Losses could track further upwards as some LCCs have substantial major maintenance checks scheduled this year, the cost of which will be higher than the reserves currently held by lessors. IndiGo is expected to be the only profitable airline in FY2015.

These profitability projections are subject to significant external factors, risks and assumptions. We have assumed oil at an average of USD110/barrel for the year (and this may be impacted by instability in the Middle East) and an exchange rate in the range of INR58-60 to the US dollar.

The projections also assume that pricing discipline will by and large be maintained. Extended periods of aggressive discounting could lead to further deterioration in financial performance.

CAPA India Aviation Outlook Report will include detailed analysis of the operating and financial performance of each carrier in FY2014 and the outlook for the year ahead.

Airline cash balances are in some cases at dangerous levels

As at the end of FY2014 CAPA estimates that Indian carriers combined had INR32.5 billion (USD585 million) of cash on hand. With annual industry turnover in excess of USD10 billion this represents the equivalent of less than three weeks revenue.

Since almost 80% of the cash balances were accounted for by just two carriers – IndiGo and Jet Airways – the situation at some airlines is even more precarious. One Indian carrier’s cash in hand is understood at times to have dropped to the equivalent of less than one day’s revenue and operations are being sustained by borrowing from travel agents against future ticket sales.

The second quarter, to Sep-2014, is traditionally the weakest for Indian carriers and in FY2014 the situation was exacerbated by the exchange rate crisis which saw the INR depreciate by more than 20% against the USD between May-2013 and Aug-2013. During this challenging period airlines engaged in aggressive discounting, as a result of which Q2 was the worst performing quarter for most airlines in FY2014.

This year the exchange rate is around 15% stronger, however oil prices are starting to creep up based on the insurgency in Iraq, and demand remains subdued. The danger is that at a time when pricing discipline is critical, the desperate requirement for working capital at some carriers, combined with the competitive response to AirAsia’s entry, could trigger promotional pricing that will draw the entire industry into deep discounting.

Generating cash through special offers in low season is inevitable, but it is the depth and duration of such discounting that will determine whether the quantum of losses in Q2 could test the holding power of some carriers.

Airlines – including the grounded Kingfisher - have accumulated loans of INR950 billion (USD15.83 billion) including vendor liabilities. The corresponding interest burden is proving to be crippling and has drawn the full service carriers in particular into a vicious cycle of debt. Last year, full service carrier interest expenses accounted for 13.2% of their top-line revenue.

At an industry-wide level, in FY2014 interest and depreciation expenses were equivalent to approximately 85% of net losses, and have contributed to USD7.4 billion of losses over the past five years.

Airlines, other than IndiGo, will require funding of around USD1.6 billion in FY2015 but raising capital will be challenging

CAPA estimates that Indian carriers other than IndiGo, will require USD1.6 billion of funding this year to stabilise their operations, not including any investment in aircraft. Given the current environment this is likely to be a challenging exercise. Inability to access sufficient funds when required may impact the operational integrity and customer proposition of some carriers.

Further foreign airline investment transactions involving existing Indian carriers consequently appear unlikely in the short term given recent losses and in light of the increasing intensity of competition in the market.

CAPA India Aviation Outlook Report will include detailed analysis of the funding requirements of each airline.

IndiGo remains the leading bright spot in Indian aviation; a potential IPO in 3Q2015 is likely to attract significant interest; order for 200-250 aircraft expected in Jul-2014

Despite the challenges experienced in the airline sector there are bright spots such as IndiGo’s success in establishing itself as a sustainably profitable airline, albeit its result in FY2014 was below earlier expectations.

The time is approaching to leverage this achievement and an IPO is likely in FY2015, possibly in the third quarter. If it proceeds it is expected to be the largest ever aviation IPO in India. CAPA estimates that IndiGo could raise USD350-400 million from the flotation.

The offer is likely to be preceded by a strong statement about its future growth prospects; IndiGo is expected to place another large order for 200-250 aircraft at Farnborough in Jul-2014 to meets its equipment requirements post-2025. The carrier has a current fleet of 79 aircraft with an order book of 186.

Despite the sustained and widespread red ink in the Indian airline industry, the enthusiasm and ambition of start-up carriers has not been dimmed. By Sep-2014 the market is expected to have seen the entry of three new airlines within the space of one year – Air Costa, AirAsia India and most likely Tata-SIA. And there are more carriers lining up with the possibility of a further two to three regional and national operators in the following year. However, market exits can also not be ruled out.

The new Modi government has an opportunity to demonstrate that it will take aviation seriously; recent statements by the Minister acknowledging the problems and indicating a commitment to reforms is welcome

The financial statements of Indian airlines do not make for pleasant reading. Since FY2008 accumulated losses have reached USD10.6 billion, while debt and liabilities have climbed to almost USD16 billion. Further deterioration is expected on both counts in FY2015. Cash reserves have dwindled and raising capital will be very difficult for some carriers. This is an industry in desperate need of quick wins to restore the interest of investors and providers of capital.

The aviation industry is expectantly waiting to hear what measures the newly-elected government is planning to introduce to specifically assist the sector. Initial statements by the Minister of Civil Aviation are encouraging – they indicate that a considered and thoughtful approach is being taken to addressing some of the fundamental structural challenges in the sector.

That the Prime Minister is apprised of and concerned about the situation is heartening. But with the industry in crisis, urgency and prioritisation are the order of the day.

While certain problems will take time to address, there are some fixes which could be implemented quickly to inspire confidence:

A clear signal from the government that it is finally prepared to take aviation seriously and is willing to work to encourage rather than obstruct the industry has the potential to transform the performance of the sector to the benefit of the entire Indian economy.

This report contains edited extracts from the CAPA India Aviation Outlook 2014/15.
The full 300+ page report, will be released on 15-Jul-2014, the leading analysis of the direction of one of the world’s most important emerging markets.
For more information, or to order the full 300+ page report to be released on 15 July 2014, contact Vishal Bhadola on +91 11 4692 1052 or capaindia@centreforaviation.com