The year-on-year yield development reflects the removal of fuel surcharges that covered last year’s record high fuel price, a significantly adjusted route portfolio, and the introduction of new aircraft with higher capacity and lower unit cost (these factors are estimated by the carrier to account for approximately 60% of the yield reduction).

In other traffic news, the LCC increased passenger numbers by 29%, on a 28% capacity (ASKs) and traffic (RPKs) increase, with load factors remaining stable at 72%.

Also in the month, Air Berlin handled 1.9 million passengers (including those traveling on the acquired TUIfly routes), a 1.2% year-on-year reduction, as capacity (ASKs) was reduced by 0.7%. Load factors improved 0.3 ppts to 69.1%. Shares in the carrier were down 2.7% on Friday.

Meanwhile, the country’s Central Bank stated the Spanish economy remained in recession in 4Q2009, with the economy shrinking 0.1% from the previous three months and contracting 3.6% in 2009 in what the bank described as the “sharpest decline in recent decades”.

Shares in Brazil's GOL gained 2.7% on Friday, as the carrier, upon the release of its Jan-2010 traffic results, commented that yields “maintained their gradual recovery pace” in Jan-2010, averaging more than BRL19.00 cents (USD10.09 cents).

In the Asia Pacific region, SpiceJet’s shares gained 5.0% on Friday, the same day Istithmar World Capital, a Dubai World Group subsidiary, sold its entire 13.4% stake in the Indian carrier for approximately USD34 million, as part of Dubai World’s strategy to reduce its debt. 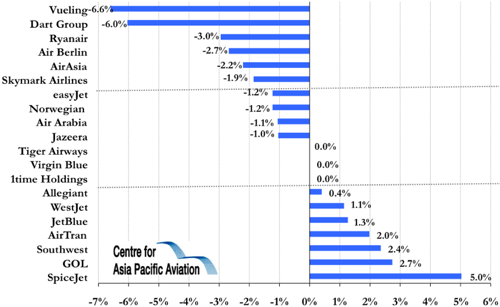